Bryce Harper was always hyped and has always hit, so it’s hard to identify the instant when his production caught up to his promise. In the moment, though, it seemed clear that Harper no-doubt-about-it broke out in April 2013. In 107 plate appearances that month, Harper hit .344/.430/.720, baseball’s second-best slash line. He’d closed 2012 with another amazing month (.330/.440/.643), which meant he’d bookended the winter with periods of being the best player in baseball. Over that stretch of 200-plus plate appearances, nobody had been better than Harper — not even Mike Trout. Harper had been a national magazine model, bumping the NBA Finals and the Stanley Cup to the corners of the cover when he was still 16. He’d been drafted first overall, made the majors as a teenager, and won the NL Rookie of the Year Award. But two Aprils ago, he appeared poised to eclipse those accomplishments.

Immediately after that brilliant breakout, though, Harper broke back in — and, with disturbing regularity, simply broke. Blanket disclaimer: Feel free to append “which is still fantastic for a 20-/21-year-old” to the end of any sentence about the lowlights of Harper’s big league career. Relative to the early standard he’d set, though, the remainder of Harper’s sophomore season was a slump. From May 2013 through the end of the year, he hit .254/.351/.420 and had multiple collisions with walls, including one that damaged his knee enough to cost him 31 games, hamper him after his return, and require offseason surgery. Last year, a torn thumb ligament sustained during a late-April headfirst slide into third kept him out for two months, and while his performance improved down the stretch, he wasn’t all the way back.

As fans’ enthusiasm and confidence flagged, so did pitchers’ fear. The rate at which a batter sees pitches in the strike zone is an indicator of his ability, because pitchers try especially hard to avoid the fat part of the plate against hitters they think can hurt them. Pitchers thought Harper could hurt them in 2012, almost from the first pitch. Of the 290 hitters that season who saw 1,000 pitches or more, the 19-year-old rookie had the third-lowest average called strike probability.1 Over time, though, that probability crept up, indicating that pitchers began to believe they could get Harper out.

According to data from Baseball Prospectus. 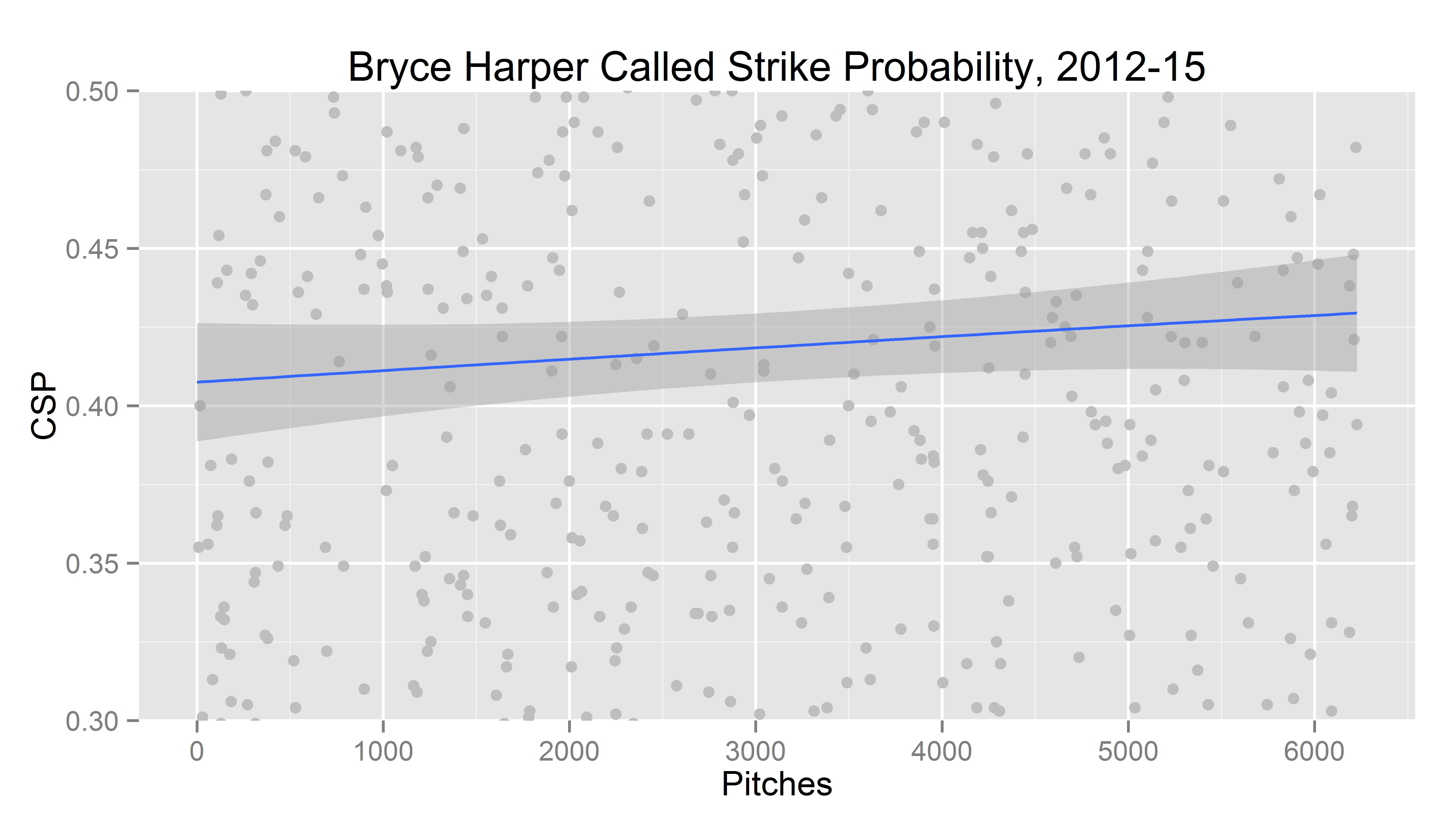 That belief had to be shaken by last year’s NLDS, when everyone watching saw Harper transform back into the beast he’d once been. In four games against the Giants, he seemed to regain his old, scary stroke, launching one homer into McCovey Cove, one to a deeper part of AT&T Park, and another at close to escape velocity.

At the time, it was hard not to see Harper’s October as a teaser for 2015, and every passing plate appearance makes his mauling of Hunter Strickland look more like a prelude to lasting success. The high-profile post-hype sleeper just completed his best calendar month in two years, going 2-for-4 with two doubles and a walk on Thursday to end April at .286/.440/.545 in 100 trips to the plate. For the first time in what seems like forever — though on the time frame on which we evaluate most players’ careers, it hasn’t been that long — we’re getting more than a glimpse of Harper the regular-season stud. And whether out of renewed respect or a lack of lineup protection, that rising called strike probability has recently begun to recede.

At first glance, little has changed since last postseason. Harper is healthy, and with no part of his body holding him back, he’s hitting bombs.

Despite Harper’s impressive power, the middle leg of his slash line is actually the most interesting. Harper has upped his on-base percentage by leading the majors with 22 walks, a skill we never suspected he’d have. Harper has never been impatient, posting league-average or better walk-to-strikeout ratios every year he’s been in the big leagues, but selectivity hasn’t been his strength. Yet this season, he’s walking at a Carlos Santana–esque clip.

Some of Harper’s apparent patience is attributable to the Nationals’ injury-depleted lineup. Already, five right-handed pitchers have intentionally walked the left-handed Harper to reach righty Ryan Zimmerman, who’s started the season in a .217/.277/.380 slump. Those IBBs represent a single-season high, but with Anthony Rendon about to resume a rehab stint, Washington’s lineup reshuffling could threaten Harper’s steady supply of free passes.

Even if pitchers don’t keep handing him walks, though, Harper seems more inclined to take them. Swing rate is the star of small samples, the stat that approaches significance before most other indicators of batter behavior. A hitter’s swing rate in 50 plate appearances tends to be a close approximation of his true talent over that span, and Harper has been to the plate twice that many times. Excluding intentional balls, his swing rate has dropped from 51.4 percent in 2014 to 44.1 percent so far, the third-largest decrease among hitters who saw at least 1,500 pitches last year and who’ve seen at least 250 this season. As a result, he’s seen 4.4 pitches per plate appearance, up from 3.9 in each of his three previous seasons. Because Harper has swung less often at pitches both inside and outside of the strike zone, he’s also seeing a higher percentage of looking strikes, and his strikeout rate has increased accordingly. When he does swing, however, he’s making more contact than ever, so it’s not as if he’s selling out for power. Harper has plenty of that without compromising his approach.

Historically, swing-rate decreases as large as Harper’s have helped hitters. From 2009 to 2014, 34 players lowered their swing rates by at least five percentage points from one season to the next (minimum 1,500 pitches seen in each season). Of those 34, only 10 recorded a lower True Average than PECOTA projected them to entering their reduced-swing-rate seasons. Collectively, the group beat their projections by 10 TAv points after swinging more selectively.

Most young hitters grow slightly more selective as they age, but Harper’s development seems to be happening suddenly and dramatically. And because of who Harper is, it’s tempting to wonder whether his evolution at the plate is part of a maturation that might also manifest itself outside the batter’s box. Maybe his willingness to wait for his pitch — or as he and manager Matt Williams have described it, to become “calm” and quiet his “rage” — is a sign of a slowdown in the motor that brought him to the top but also pushed him too hard at times.

Harper has been a player who worked out obsessively, who paid little attention to warning tracks, who played through injuries to his detriment and then defiantly declared he’d do it again.

I will keep playing this game hard for the rest of my life even if it kills me! Ill never stop! #RespectTheGame

We knew what he was when he instinctively came close to diving, leaning like a sprinter heading toward the tape, as he neared first base on his debut ball in play — a routine grounder Williams wasn’t around to see.

Harper’s almost dangerous drive was the only thing that could sabotage his exceptional talent, so he had to find the right balance between intensity and skill. Age-wise, Harper has always lapped the rest of the league — even now, the fun fact about how he hasn’t faced a younger opponent as a professional applies — but pacing is an important part of any race, even for the fastest runners. Harper’s newfound patience doesn’t prove he’ll be mellower on both sides of the ball. But it might be the best indication we’ve seen that Harper has more than one gear — and maybe all that’s standing between him and superstardom is the discipline to downshift.