As we enter the fourth weekend of the 2015 MLB season, the New York Yankees occupy a position very few would’ve expected them to be in before the year began: first place in the AL East. For that, they can thank several factors, including surprisingly hot starts from Michael Pineda, Mark Teixeira, Chris Young, and, of course, Alex Rodriguez. But perhaps the biggest reason for the team’s early success is a really good, really deep bullpen that’s dominating opponents, firing mind-bogglingly hard fastballs, and doing all of that at dollar-store prices.

So yes, we have to ask: Could the $219 million Yankees be this season’s version of the Cinderella Royals?

They certainly looked like it for a breathtaking stretch during Wednesday’s 3-2 extra-inning loss to Tampa Bay: Over 5.1 innings, Andrew Miller, Chris Martin, Justin Wilson, Dellin Betances, and David Carpenter combined to strike out seven batters, walk just one, and allow no runs and no hits. But beyond the box-score dominance, those five relievers threw 32 fastballs for 23 strikes, averaging 96 mph a pop.

Considering how much cheese they’re firing, none of this should be a big surprise. According to Brooks Baseball’s PITCHf/x analysis dating back to 2008, the Yankees throw the fourth-hardest average fastballs.1 But considering the pedestrian pedigrees, low salaries, and low-cost acquisitions that make up the majority of New York’s bullpen, maybe “surprise” really is the right word.

Defined as four-seamers, sinkers, or cutters. 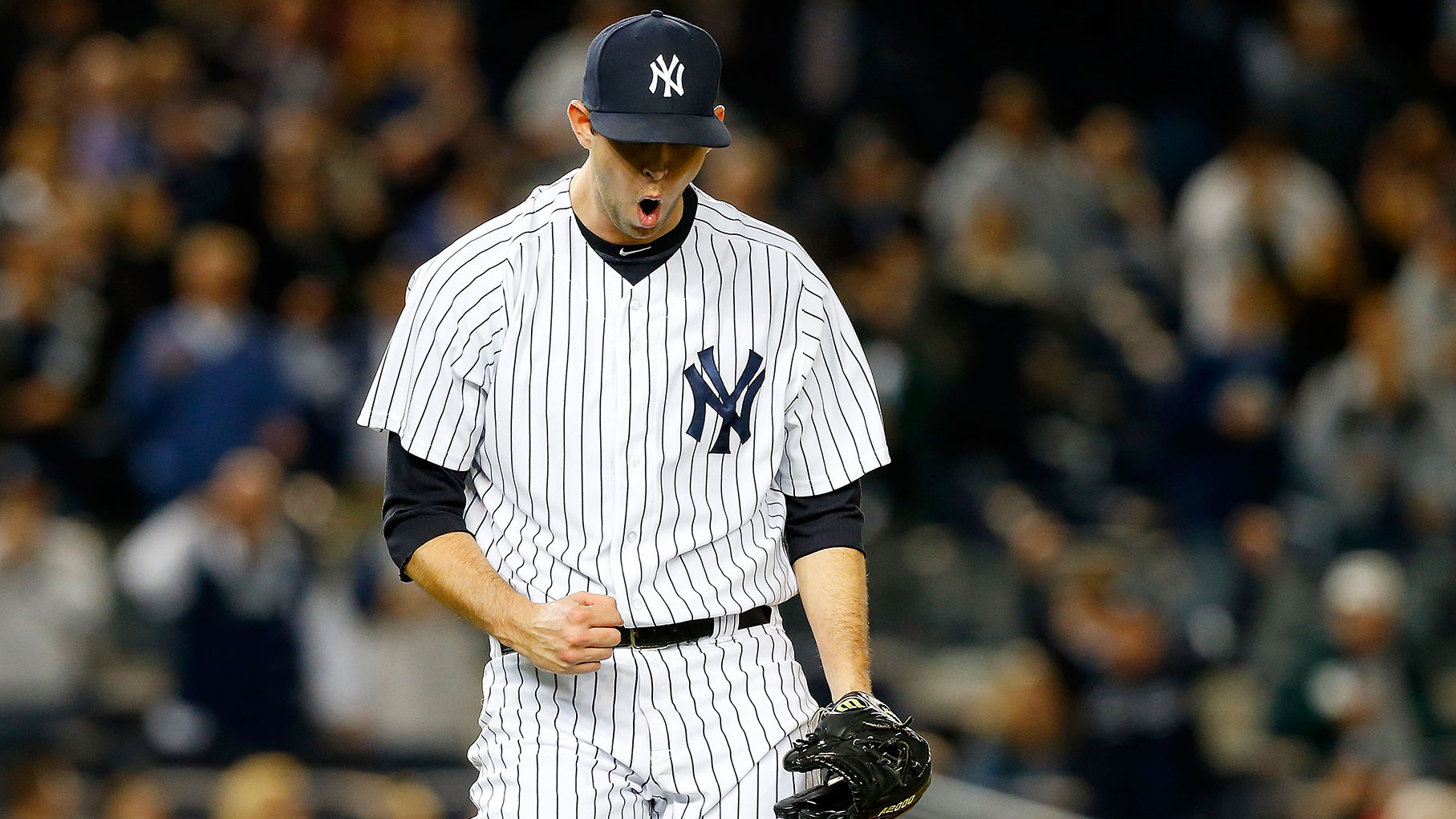 The poster child for this unheralded group is Martin. Drafted in the 18th round by the Tigers way back in 2004 and in the 21st round by the Rockies in 2005, he didn’t sign either time. He followed a long and winding path from there, taking jobs at Lowe’s and UPS, pitching in an independent league, and overcoming a major shoulder injury. He spent three years in the Red Sox system and got thrown into a minor trade with the Rockies in December 2013 before finally making his major league debut at age 27 in April of last year. His numbers over 16 appearances with the Rockies were terrible: 15.2 innings, 22 hits allowed, and a 6.89 ERA.

Undaunted, the Yankees scooped Martin up anyway, nabbing him in January for a handful of cash. Winning a bullpen job right from Opening Day, he’s been a beast ever since, whiffing 13 batters in 11 innings, with just seven hits, two walks, and zero home runs allowed, following guys like Drew Pomeranz and Jeremy Guthrie, who’ve found salvation at sea level after enduring mile-high nightmares. The first thing you notice about Martin is his 6-foot-8, 215-pound frame. The second is the velocity that lanky body generates, averaging 95 mph on his four-seamer, 94 on his sinker, and 90 on his cutter. When Martin rocks back to fire that heat, you might say he has batters … seeing yellow.

Similar to Martin, Esmil Rogers spent the first three-seasons-plus of his major league career in Colorado and was also awful, posting a 6.77 ERA while splitting time between starting and relieving. A 53-inning stint with the Indians went considerably better, but Rogers returned to his flammable ways in Toronto. The Jays cut him loose last July, allowing the Yankees to grab him for nothing more than a waiver claim. After a mediocre 25 frames with New York last year, the 29-year-old has impressed so far this season, fanning 16 batters and walking just three in 15.1 innings, serving as a valuable long man.

Carpenter and Chasen Shreve come from similarly humble origins. Carpenter was a 12th-round pick by the Cardinals in 2006, and he’s already playing for his fourth big league club, while Shreve was an 11th-round pick by the Braves in 2010. Both came over in the trade last January with Atlanta, one that sent Manny Banuelos — a once highly touted lefty who hasn’t been much of a prospect for three years now — to the Braves.

A fifth-round pick in 2008 who pitched in parts of three major league season in Pittsburgh with mostly positive results, Wilson came with slightly better credentials than his pen-mates. But he too arrived in new York at a low cost, as the Yankees flipped arbitration-eligible backup catcher Francisco Cervelli to get him.

All five of those no-name pitchers throw four-seamers well above 90 mph: Shreve is the low man at 91.3 mph this year, and everyone else is near, or above, 95 mph. And all five have enjoyed some measure of success, while Martin in particular looks like a great candidate to log lots of high-leverage innings. But the kicker with this unheralded quintet is their microscopic salary number: Even with two of them already in their arbitration years, the group will combine to make an average of just $900,000 in 2015. And that’s without adding in electric lefty Jacob Lindgren, a 2014 second-round pick out of Mississippi State who’s fanned an amazing 62 batters in 35 minor league innings and could be one of this season’s most impactful call-ups.

The payoff for all this cheap, hard-throwing talent could be substantial. Last year, the Royals taught us about the importance of bullpen depth. Granted, closer Greg Holland and setup man Wade Davis formed a better one-two punch than any other in baseball, but KC consistently turned games into six-inning affairs, thanks to the dominance of Kelvin Herrera, plus periodic late-season excellence from veteran righty Jason Frasor and young lefty Brandon Finnegan.

This year’s Yankees pen includes a formidable duo of its own in setup man Dellin Betances and lefty closer Andrew Miller. After a season for the ages in 2014, Betances seemed to struggle with control in his first few games this season — walking six in his first three — but in the eight appearances since, he’s allowed one walk and is still yet to allow an earned run in 12.1 innings. He’s also the lowest-earning Yankee this year, making the league minimum of $507,500. Meanwhile, after signing a four-year, $36 million free-agent deal over the winter, Miller is the lone Yankee reliever making real cash. Yet he’s earned his pay and then some so far, throwing 11.1 scoreless innings with just three hits allowed and a staggering 20 strikeouts.

And just to top it all off, Betances guns his four-seamer at 96 mph,2 Miller at 95. If the no-name crew can ably support those two figurative and literal giants — Betances is 6-foot-8, Miller 6-foot-7 — the Yankees might have the best set of relievers in the majors.

It was closer to 98 last season.

New York still has its share of problems, and even a great bullpen can eat up only so many innings. Masahiro Tanaka’s is a major health question mark with no great replacements on the way, the middle infield stinks, Carlos Beltran looks washed up, and the overall talent on the roster just can’t match up with what the team fielded during the glory years. So if the Yankees want to contend for a division title deep into the year, the pen will need to keep pumping that gas. The fuel might be dirt cheap, but it’s still premium.