Two of the nation’s best college basketball teams will face off Saturday. Only instead of occurring in one of college basketball’s usual hotbeds, like Lexington, Louisville, Chapel Hill, or Durham, this game will tip off in the unlikeliest of places: Cedar Falls, Iowa.

It’s in the land of Kurt Warner and president-approved public Wi-Fi that two Missouri Valley Conference heavyweights — 12th-ranked Wichita State and 18th-ranked Northern Iowa — will square off for the first of what promise to be two epic conference showdowns. It’s the first time in more than 30 years that two top-25 Missouri Valley teams have met in conference play. So how in the name of the god of power conferences did we get here?

If you were playing a word association game in Kansas, the word “basketball” would probably be inexorably linked with “Jayhawks.” Despite a brief resurgence in the early 1980s under coach Gene Smithson, the Wichita State program has been largely irrelevant to the basketball scene since Gary Thompson piggybacked off Ralph Miller’s success and took the Shockers to a Final Four in 1965. During those five decades, the Kansas program about 160 miles north on I-35 has been busy, appearing in 10 Final Fours and winning two national championships. The Shockers, meanwhile, could only muster a single NCAA tournament appearance from 1988 to 2011.1

The lone trip was after the 2005-06 season under now-Maryland coach Mark Turgeon.

Since Gregg Marshall took over in the spring of 2007, the Shockers have enjoyed a meteoric rise to national relevance. Every year since his arrival, the program has taken a noticeable step forward. It went from an even .500 to the NIT championship to a Final Four. During this recent run of three consecutive NCAA tournaments, Marshall has averaged 30 wins per season and is on pace for another 30-plus-win campaign this year. When Marshall began the job, though, the program was hardly primed to take flight. His first season doubled as the team’s lone season under .500 during his tenure.

“That was a very difficult time for us and for me personally,” Marshall says. “I had never had a losing record as a coach. So we set out to try and rebuild the talent pool. We signed some pretty good players that first year.”

One of those players was Toure’ Murry, a 6-foot-5 scoring guard who was a catalyst for the program’s turnaround. Marshall has buoyed the program by recruiting a number of underappreciated talents like Murry. Three Shockers — Gal Mekel, Cleanthony Early, and Murry — have gone from playing for Marshall to the NBA.2 Last summer, Early, taken 34th overall by the Knicks, became the first Wichita State player drafted into the NBA in two decades.3

Murry, now with the D-League’s Rio Grande Valley Vipers, has appeared in 52 games with New York and Utah, while Mekel has played in 35 games with Dallas and New Orleans.

The last before Early? Guard Gaylon Nickerson, who played at Wichita State as a freshman and transferred several times before being selected by the Atlanta Hawks in the second round of the 1994 draft.

And junior guards Ron Baker, ranked 43rd among Draft Express’s top prospects, and Fred VanVleet, ranked 73rd, are solid bets to join Early in the NBA. Both Baker and VanVleet, thanks in part to the team’s success, have become household names for the majority of college basketball fans because of their impressive skill sets. VanVleet might be the country’s best playmaker (he ranks 15th in the country in assist rate, per KenPom data), while the 6-foot-4 Baker is a combo guard with a sweet shooting stroke — his effective field goal percentage (which factors in 3s) is 55.4 percent — who leads the team in scoring.

Adding to the Shockers’ talent collection next fall will be an ESPN 100 recruit: 6-foot-8 forward Markis McDuffie. According to Murry, the reason talented players choose Wichita State is simple.

“Me coming to Wichita State was all about Gregg Marshall,” Murry says. “From day one he believed in me.” 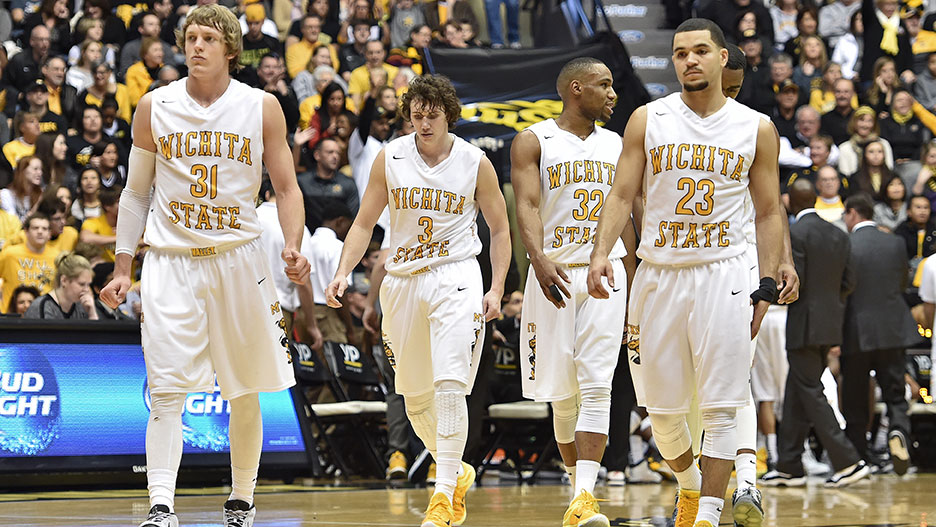 As Wichita State creates household names thanks to its rise to national prominence, Ben Jacobson’s Northern Iowa program keeps churning out successful seasons without much name recognition. If Jacobson’s team wins Saturday, the victory would mark the ninth time the school has reached the 20-win plateau in the past 12 seasons. It’s an impressive run for a program that hasn’t been boosted by a single player with enough talent to wear an NBA jersey.

“The most important thing for us in terms of recruiting has been finding young guys that have got the kind of toughness it takes to be a great teammate,” Jacobson says. “Young guys that have that characteristic are going to be tough and hard-nosed at the defensive end of the floor. And they’re gonna help your offense look good because they’re unselfish and have a good feel for how to play.”

One of those blue-collar grinders helped put the school on the map with perhaps one of the signature shots in NCAA tournament history (or at least one of the ballsiest). If you’re drawing a blank on what I’m talking about, here’s a refresher:

Ali Farokhmanesh came to UNI after spending time at a junior college, joining a scrappy group that would author one of the most successful postseason runs in school history. When I asked Farokhmanesh what fueled the team’s winning ways during his time with the program, he laughed.

“Defense. That’s the staple. Solid defense,“ Farokhmanesh says. “You’re making people make multiple plays. It was a point of emphasis to make teams make two or three plays to beat you, not one play where a guy penetrates then: layup.”

The defense employed by Jacobson is nothing revolutionary, just a slightly modified version of Dick Bennett’s pack line. Like the traditional pack line, Jacobson’s teams stays in the gap, forces opponents into the middle, and doubles in the post. They also do their best to avoid opponents driving to the baseline. In a traditional pack line, there are no rotations if that happens, but that’s where Jacobson makes the system his own. Here’s the Northern Iowa coach explaining his philosophy at a clinic a few years ago:

“We started every day with the same drill. I didn’t like it, but obviously it paid off,” says Farokhmanesh, who moved on from a brief pro career overseas to become a graduate assistant at Nebraska. “Now as a coach I realize how much it helped us.”

Farokhmanesh is referring to Jacobson’s 3-on-3 defensive shell drill. Most teams do shell drills with four defenders outlining the paint and four corresponding offensive players standing on the perimeter. It’s the most common practice technique for coaches to get their players to understand the basics of a man-to-man defensive system. They put their teams through a variety of situations — moving into help on ball reversals, stopping dribble penetration, even defending out of pick-and-rolls. The goal is to use the controlled setting, one far less chaotic than 5-on-5 games, to reinforce good habits and correct bad ones.

“With three of you on the floor, if you’re working guarding the dribble in your 3-on-3 shell, the guys in your help positions in the gap are a little farther away,” Jacobson says. “When you get into some rotation stuff that we do with that 3-on-3 shell, your rotation is longer, your closeout is longer, you gotta cover more ground with three guys.”

If UNI slightly improves its defensive efficiency ranking (it’s tied for 16th), it will mark the second time in Jacobson’s tenure the school will have finished with a defense in the top 15 — a solid result for a school that doesn’t attract the same long-limbed athletes that end up at the country’s more prestigious programs. And you better believe, after a nightmare season on that end of the floor last year when UNI slipped to 187th, Jacobson will stay consistent to his defense-first approach.

“It isn’t a difference in scheme, it’s different from a year ago in terms of emphasis and commitment and holding guys accountable to what we’re doing on the defensive end of the floor,” Jacobson says. “Last year I got away from it — I wished I wouldn’t have — and this year we’ve went back to it and it’s paying off for us.” 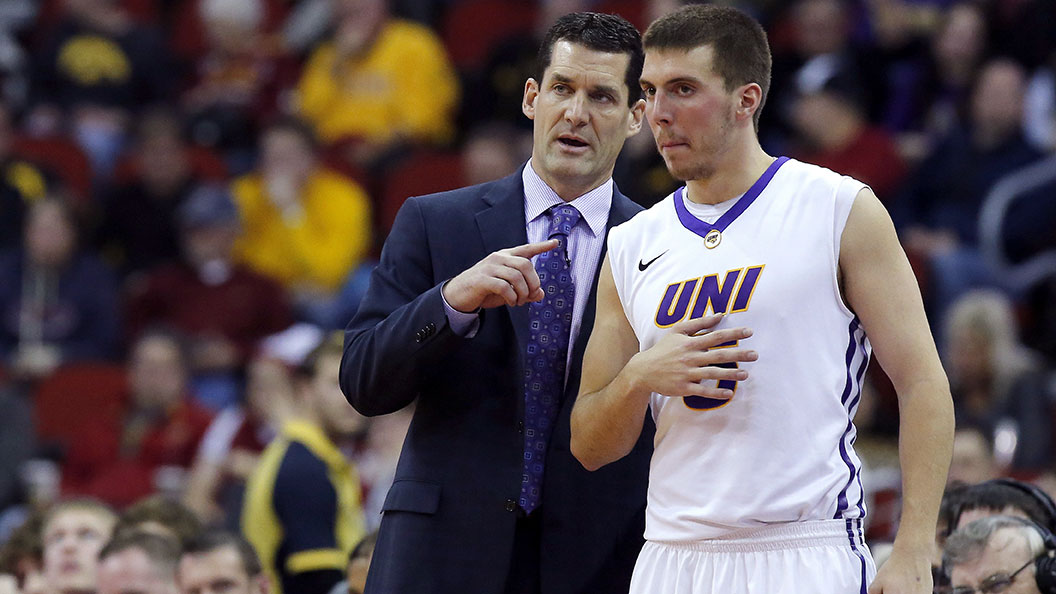 Getting skilled players to a program is only half the battle. So to suggest that Wichita State’s success comes solely from overlooked talent is a disservice to Marshall’s ability to get them to play hard and play together. The Shockers have rarely entered a game with a glaring, exploitable weakness. Marshall estimates he splits his time on the three main areas of the game — offense, defense, and rebounding — roughly 40/50/10 in practice. But even with that balance, the Shockers offense has developed into an entertaining hybrid of old-school motion — think Bob Knight at Indiana — and a new-ish pick-and-roll attack Marshall picked up from one of his assistant coaches.

“I learned the ball-screen stuff from my former assistant coach who’s now the head coach at Bowling Green State University, Chris Jans. He’d run this ball-screen offense we called ‘Bounce,’” Marshall says. “We probably deploy that at least 50 percent of the time now.”

Pick-and-rolls with a savvy playmaker like VanVleet being flanked by a dead-eye shooter like Baker pose a number of problems for opposing defenses. Marshall stresses that his teams look for what he calls the “roll up” guy, the player lifting behind the screener as he dives toward the basket. That “roll up” or “lift” action is such a nuisance that NBA teams actually have built-in sets to get dual-threat players — wings who can both shoot and attack the rim — in that position. Here’s a set the Dallas Mavericks run for Chandler Parsons using the “roll up” concept:

When that “roll up” guy is Baker, Wichita State’s opponents are left with the difficult decision of either letting the rolling big man go unchecked as he barrels toward the rim or leaving one of college basketball’s best shooters open on the perimeter. And if you give Baker any space, he does this:

When the pick-and-roll attack isn’t a good fit against Wichita State’s opponent, Marshall falls back on set plays or the motion offense that he learned from Hal Nunnally, the coach he both played and worked for at Randolph-Macon. It all adds up to a team that is an offensive wrecking ball — it ranks 18th in efficiency — and an enjoyable watch for modern NBA lovers and old-school purists alike.

“With as much basketball as we [coaches] watch, there’s very little I would pay to watch.” Marshall says. “But there are certain players and certain teams that you’d pay to watch play. And when people say that about your team, it’s pretty cool.”

People are certainly willing to pay to watch Saturday’s game as well. And with all the conference reshuffling over the past few seasons, it’s sort of hard to believe there’s another potential top-10 team not named Gonzaga outside one of the power conferences. Yet these two programs located in unassuming Midwestern cities are doing their best to show they can keep up with the big-name brands in college basketball. And even though one of them is going to lose the game, a major top-25 battle between two Missouri Valley schools? That’s pretty cool, too.