Hey, Liverpool, can we talk? We can have it in the car if you like — that way we can both stare straight ahead and not make eye contact, and then when it’s over we can all go on with our lives. The fact is, we can’t put it off any longer. We need to talk about Steven Gerrard. There comes a time in every star’s career when athleticism begins to fade. For some, that decline simply marks the beginning of a second (or third or fourth) act in their career; for others, it signals the beginning of a suddenly not-very-distant end. So the question for Liverpool and Gerrard is twofold: What kind of player can the midfielder become? And how likely is it that he’ll be able to make that transition?

The major issue for Gerrard is that he just isn’t as mobile as he used to be. At various points over the course of the season, Gerrard has served as the more attacking-minded half of a double pivot with Lucas Leiva (whose recent injury heightens the Gerrard conundrum all the more), the runner between a defensive midfielder and a creator in a three-man midfield, and, finally, most problematically, as the deepest-lying midfielder in a trio, and the more defensive half of a double pivot. That’s nothing new for Gerrard; his versatility, his inability to fit squarely in a position, has always been part of what defines him. In his younger days it was a strength. Now it’s quickly turning into a weakness.

The reasoning behind shifting Gerrard into a deeper midfield position is fairly clear. First and foremost, Gerrard is an icon, and he’s almost singularly responsible for the most iconic moment in Liverpool’s recent history. He’s a big enough star and important enough figure at the club that he probably gets to bring the ship down with him before he gets benched. So, if he’s going to be on the field, what’s the best place to put him? Well, given that he has mobility issues but remains a fantastic ball striker and can still regularly play defense-splitting passes like this …

… well, it seems natural that Gerrard could slide easily into the role of deep-lying playmaker. He could be Liverpool’s Andrea Pirlo.

In fact, when you look at the stats, as Ted Knutson did here, Gerrard bears a unique and striking (although not perfect) resemblance to the signature deep-lying playmaker of the last 20 years, the great Football Jesus of Juventus. Or, if you’d prefer that from Ted in visual form, here are Pirlo and Gerrard, profiling very similarly since the 2009-10 season. 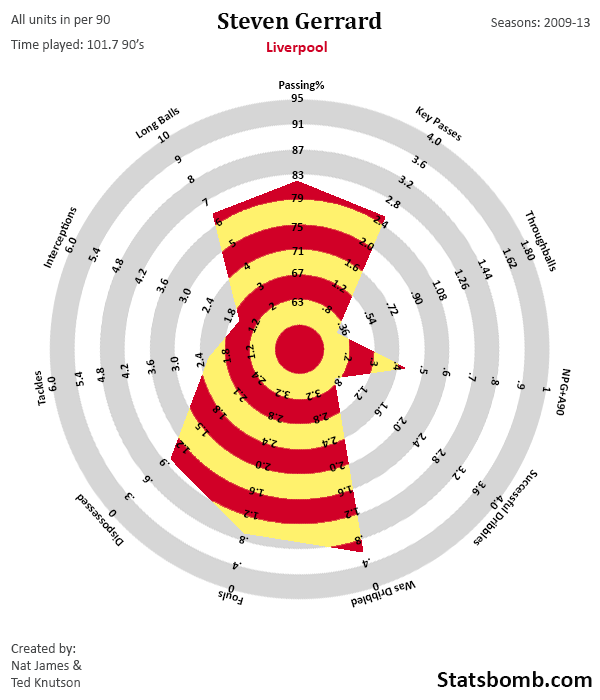 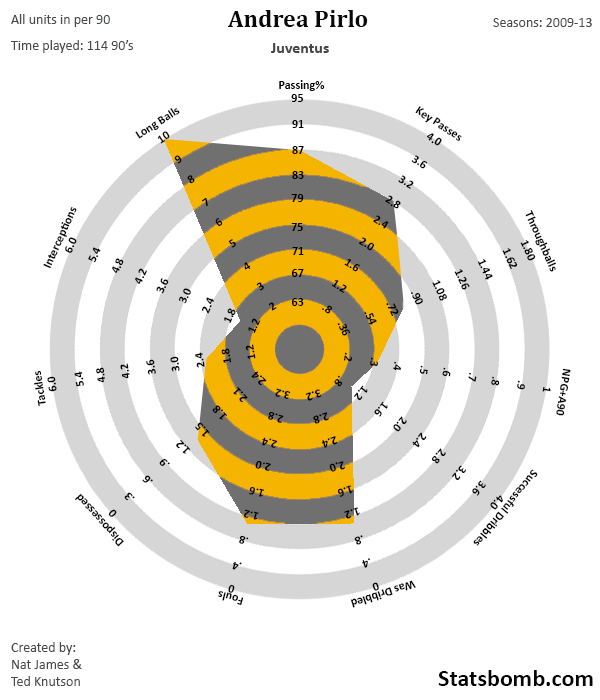 Here’s the issue: Pirlo has always been an athletically limited player. He had shifted into a deep-lying playmaker role about a decade before AC Milan sold him to Juventus in 2011. So, while it’s true that Pirlo has undergone a tremendous renaissance over the last few seasons, that’s more attributable to Juventus catering an entire system to his lack of mobility and surrounding him with two of the best two-way midfielders in the world (Arturo Vidal and Paul Pogba). In effect, Juventus constructed a team specifically to allow Pirlo to continue to do what he’s always done best.

As the deep-lying playmaker, Gerrard will have to learn a new skill. The role combines two facets that have never been the focus of Gerrard’s game. First, when in possession he has to make himself available to receive the ball. Starting from the 2010-11 season, Gerrard received just under 55 passes per 90 minutes during league games, according to ESPN Stats & Info. That’s 10 fewer than Andrea Pirlo did over the same time frame. Defensively, Gerrard will have to commit to the nebulously defined task of “shielding the back four.” While basically every football fan on the planet knows the phrase, it’s pretty difficult to define precisely what it means. In general, though, if something goes wrong in a pocket of space in front of the defenders but behind the midfielders, it’s probably the deepest-lying midfielder’s fault.

It’s a big challenge for Gerrard, compounded by the fact that he simply won’t have the same quality of midfield shield in front of him. While Jordan Henderson is developing from a talented prospect into a versatile midfielder (and has almost certainly become more potent as a runner than Gerrard himself at this stage), he’s not Arturo Vidal, because really nobody is. And with Gerrard playing as the deepest midfielder, Liverpool have nobody to comfortably pair with Henderson ahead of him. Rodgers tried Lucas in that role, to somewhat hilarious effect, at Stoke. Joe Allen is a more natural fit, but he can’t stay on the field and is untested, to say the least, as a dependable week-in, week-out starter on a team contending for a Champions League spot.

Now, despite all that, manager Brendan Rodgers has some reason to hope. Gerrard clearly has both the passing quality and vision to excel in the creator role. He’s relentlessly good at carving open defenses with accurate long balls to create chances. He’s set up 0.9 chances per 90 minutes from long passes in open play since the 2010-11 season. That’s better than anybody in the Premier League except Juan Mata. The prospect of Gerrard spending games with time on the ball to thread passes to Luis Suarez is enough to make any manager giddy. All Gerrard needs to learn is to be in the right place at the right time. And Rodgers needs him to learn it quickly. He can’t bench the Liverpool legend, and with Lucas Leiva out for two months with a knee injury, it sure seems like Gerrard is about to get a lot of on-the-job training.

There’s a lot riding on the rest of this season for Liverpool’s iconic midfielder. He has to develop a skill he’s never shown before, with the future of his career riding on the outcome, in the middle of a Champions League race. That’s a tremendous amount of pressure. Then again, it’s not like Steven Gerrard is unfamiliar with rising to the occasion.