Bill Simmons: God bless the Suns — one of my favorite League Pass teams, one of my favorite front-office reclamation stories and our best night-to-night threat for Artest Melee 2.0 because everyone on this team carries themselves like Bruno on Real World. They have a bright future no matter how this plays out. But holy hell did they screw this Goran Dragic thing up. I voted him second-team All-NBA last season after he mastered a devastatingly effective slash-and-kick game in Jeff Hornacek’s fan-friendly offense. Last summer, they kept Dragic and Eric Bledsoe, signed Isaiah Thomas, drafted Tyler Ennis AND kept Archie Goodwin. Five point guards? That’s ridiculous. I mean, if Grantland had extra spots for writers, would we keep adding more and more NBA writers while ignoring all the other sports? You’re right, bad example. But any strategy that ends with the best Phoenix point guard of all the Phoenix point guards saying “get me out of here” just couldn’t have been handled correctly.

If I were Phoenix, I would dump Thomas for an expiring and second-round picks from Boston (the Celts have been circling him for two weeks), Detroit or Washington, then do everything I could to make up with Dragic — even if it meant signing Dragic’s nemesis, Sasha Vujacic, then forcing Vujacic to carry everyone’s bags on road trips and participate in gimmicks for home games like Sasha Vujacic Human Piñata Night. Save the Dragic relationship, Phoenix. Sometimes the best trades are the ones you don’t make. (Just ask Golden State.)

Jason Concepcion: I’m using every ounce of self-control available to me to keep from being the billionth person to use a Ron Burgundy GIF as a way to communicate surprise at the speed at which a given situation deteriorated to throwing-of-tridents level. We went from Woj gazing into his cauldron of goat blood to report that if the Suns were to make a move, it would likely be some combination of Thomas and/or Gerald Green heading out to “Dragic won’t re-up” in less than 12 hours.

If no trade materializes, Dragic would head to free agency seeking a four-year max from Lakers or Knicks that could reach $80 million range

Speaking as a Knicks fan, I VERY MUCH LIKE GORAN DRAGIC, WHO WOULD IMMEDIATELY BE THE BEST KNICKS POINT GUARD SINCE ROUGHLY 1992. But I like him in the summer, as a free agent. Not as some kind of classically Dolan-esque “caught me at a bad moment” deal in which New York surrenders assets (of which it has precious few anyway) for a dude who can walk away for nothing. The team has waded through too much blood to get here.

To quote Don Draper, “THAT’S WHAT THE MONEY IS FOR.”

Chris Ryan: This is what happens when you collect assets, right? Sometimes the assets get annoyed at being collected. Still, I can’t really figure this one out. Like, why wouldn’t you want to play for Phoenix? Is Hornacek confronting Dragic in the locker room with some kind of “not quite my tempo” routine?

The Woj report on this whole situation — which indicates Dragic is only interested in being traded to the Lakers, Knicks, or Heat — suggests that Dragic, or his agent, hasn’t watched basketball since the late ’90s. That being said, I would love nothing more than to see a starting Heat five of Dragic, Wade, Deng, Bosh, and Whiteside play the Cavs in the playoffs. I can feel most of the greater Cleveland area reaching for Tums right now.

Problem is, there is no combination of words that doesn’t include “Hassan” and “Whiteside” that would keep Ryan McDonough on the phone for more than six seconds. This is a post–Timofey Mozgov trade world we live in, after all. Of course, Pat Riley may in fact be an ageless prince of darkness, and he might be able to conjure some dark magic out of Birdman and Shabazz Napier.

Andrew Sharp: Put Dragic on the Pacers. Can this work? We’ve gotta find a way to make this work. Send draft picks, George Hill, Solomon Hill, whatever. Dragic has apparently sent a list of teams he would re-sign with this summer, and there’s zero chance the Pacers are on that list, but still. It’s time for Indiana to stop screwing around and go for the 8-seed. The team didn’t tank (questionable decision), and now Paul George is coming back in a few weeks, so fuck it. Why not add Dragic and make this one of the most exciting stories of the second half?

I know Dragic could still leave this summer, but Larry Bird could offer him the most money to stay, and he makes a ton of sense on that roster. Worst-case scenario: Three months of Dragic makes the end of the year awesome (a penance to fans for last season), frees them from someone like George Hill, and it’s completely worth it. That scenario still gives the Pacers cap space to add a different point guard before next season. Giving up a first-round pick to make all of this work would hurt, but I think most people in Indiana would trade a first-round pick to not have to watch George Hill anymore.

It’s late, I haven’t looked at the trade machine on my phone, and I have no idea if this will look remotely realistic in the morning, but … Pacers. We need to get Goran Dragic on the Pacers just in time for the Paul George resurrection.

JUST DO IT NOW, DAMN IT. WORRY ABOUT EVERYTHING ELSE LATER. GIVE GEORGE KARL THE WELCOMING GIFT HE DESERVES.

Ryan: If I am McDonough and you are offering me Solomon Hill and George Hill, or Shabazz Napier and Chris Andersen, or Jason Thompson and Nik Stauskas, this is my reaction:

Concepcion: NEVER GIVE UP.

Sharp: I know they won’t do it, but god, it would be fun if the Knicks traded their first-rounder tomorrow. Knicks Twitter would turn into the zombies from World War Z.

Chau: If you are McDonough, then maybe I should keep this one to myself:

Rajon Rondo, Monta Ellis, and Goran Dragic on the same team is my beautiful, dark, twisted fantasy. Yeah, the Mavs would be getting away with murder, but at least one guy in Phoenix would be elated:

Sharp: No lie, my first thought when I got this email was, I bet Danny is really pumped about what this means for Archie Goodwin.

Think about it: OKC gets Dragic (upgrade over Reggie Jackson) and Green (outside shooting). Phoenix brings in Jackson. If he works out, great; if he doesn’t, well, he’s already used to being ostracized and yelled at by his teammates. Maybe Kendrick Perkins gives them eight to 10 decent bench big-man minutes, and some veteran presence, and EVEN MORE TOUGHNESS. You’re basically just swapping problems, but they’re interesting problems.

Damn it. He’s going to Houston, isn’t he?

Sean Fennessey: What I really want to see is the Suns transform into a Morris-Morris-Monroe-Kanter-Len starting five.

Simmons: Question: “What’s the most realistic Dragic trade that would make the 2015 playoffs more fun?” I came up with three medalists. By the way, I threw in Zoran Dragic in every trade because the Dragic brothers are a package deal, kind of like Sean Fennessey and Chris Ryan. And I think Fennessey is Zoran. Anyway …

Bronze: The Dragic brothers to Chicago for Taj Gibson, Kirk Hinrich and the right to swap Phoenix’s own 2015 first-rounder with Sacramento’s first-rounder that Chicago owns (top-10 protected). If only because we needed to make Derrick Rose’s season weirder.

Silver: The Dragic brothers to Houston for Terrence Jones, the Greek Non-Freak/Alexey Shved expirings and New Orleans’s protected lottery pick. Unfortunately, Houston dumped Goran for Linsanity in 2012. I mean, would YOU forgive Dork Elvis for that? Me neither. He’s not going there.

Gold: The Dragic brothers to Indiana for Solomon Hill, the Chris Copeland/C.J. Watson/Lavoy Allen expirings and Indiana’s unprotected 2015 first-rounder. Now we’re talking! Fast-forward to mid-April: Dragic, George Hill, David West, Roy Hibbert and a rejuvenated PG-13 at crunch time AS A FREAKING 8-SEED?????? Sign me up! Sign me the F up! I’m rooting for this one. Long live the Legend in advance.

Fennessey: This whole exchange was rude. 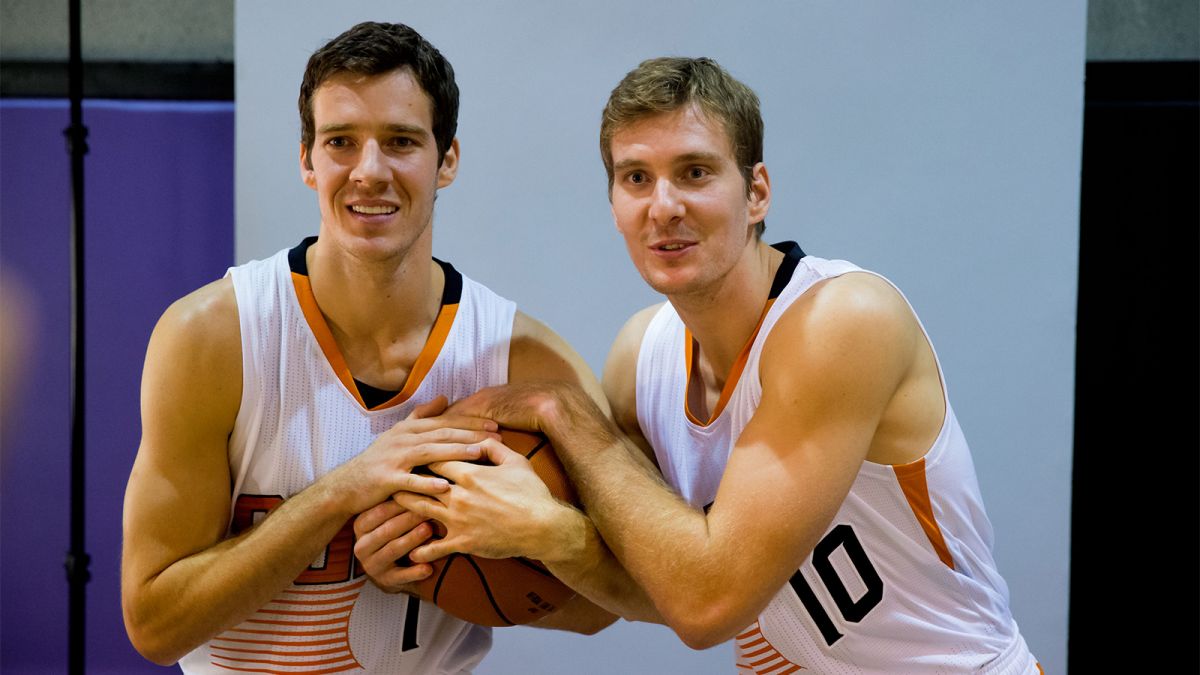 Simmons: Hey, the Celtics can’t get Dragic for Avery Bradley and two of their 28 lottery-protected first-round picks, right? [Dead silence.] Jeez, you guys don’t have to be assholes.