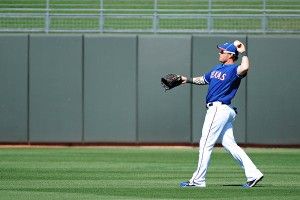 Gail Mazur once wrote, “Baseball holds so much of the past, pulls me back to it each year, to the soothing unclocked unrolling of the innings, to the sound of an announcer through an open car in May …”

The Texas center fielder is getting a little ornery about the “center fielder” part of his job description. On Tuesday, the 2010 American League MVP noted that the Rangers had no plans to move him out of center to a corner outfield position, thus possibly keeping him a little fresher and less dinged up over the course of the season.

“I don’t know. You think it’s got anything to do with free agency and get as much out of me as they can before they get rid of me?” he said.

Seven “kidding”s. We got it. Hamilton is in the final year of his deal. He’s been such a dominant player over the last few seasons, anchoring Texas’s terrifying lineup, that you forget he only made the Rangers starting nine in 2008.

Hamilton is a guy who comes with a certain lack of stability. For as valiant as his battle with addiction has been, it’s still a wild card that any business-savvy team (as the Rangers seem to be) has to take into consideration. He will get his money, in Texas or elsewhere.

But it will be interesting to see how this plays out for the team and player. Hamilton had been insistent that his contract situation get resolved by this season’s spring training. In February, when Hamilton had his most recent reported relapse, Rangers GM Jon Daniels said, “The contract is not really the priority with Josh right now — his health and family are. We’re not going to preempt that for anything about a contract. Given how close we are, I don’t anticipate that happening before spring training. We all agreed to table things before we got to spring training.”

Sounds like it definitely got tabled. But it’s not clear how comfortable Hamilton is with all of it.