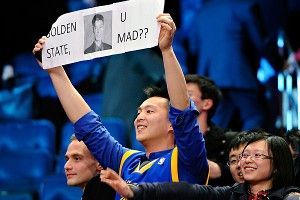 Earlier this week, I wrote about the breakout game of second-year Knicks backup point guard Jeremy Lin. In one of the most entertaining performances of the season, Lin led the Knicks to a 99-92 victory over the Nets with 25 points, five rebounds, and seven assists. Even though I definitely became a Jeremy believer and expected him to show other flashes of brilliance in the future, I didn’t expect that to happen in the following game.

On Monday night, Lin led the Knicks to a 99-88 win over the Utah Jazz and toppled his previous marks in points and assists, with 28 and eight, respectively.

While Lin’s performance in the first game was important, equally notable was the on-air effort by Walt “Clyde” Frazier. Lin surprised everyone, Frazier included, but the legendary commentator still found a way to rattle off a number of fantastic lines about Jeremy’s performance. Unlike Saturday’s game, the second chapter of the Lin Chronicles showed a prepared Frazier, one who was ready and almost expecting Lin to dazzle the crowd for a second straight night.

Per usual, Clyde didn’t let us down. It’s been a while since he had a reason to truly flex his vocabulary, so while these games are certainly about Jeremy’s MSG mitzvah, we must continually acknowledge the equally impressive work by Frazier.

1. “The neophyte. This is what he likes to do, penetrate. No one denies his foray down the baseline, good swoop and hoop.” (Replay of a Lin baseline drive. Also, Walt just said “neophyte.” 10-5, Knicks.)

2. “He’s going to be taking Lin out to dinner soon.” (In reference to Tyson Chandler’s respect of Jeremy Lin’s pick-and-roll skills.)

7. “Watch this mesmerizing penetration and the scoop off the glass. That got the crowd involved. So nice, we show it twice.” (Lin’s penetration through the entire sorry Jazz defense, ending with a circus lefty layup. 86-82, Knicks.)

9. “Watch how he does this. Looks like he’s going to shoot it left-handed, then swoops to the other side off the glass. This kid is a lot stronger than he looks.” (Another Lin layup and the foul. It’s worth noting, at this point, that the entire New York Giants football team is courtside and completely freaking out. 89-80, Knicks.)

Jeremy, you’re officially a star. So far, “Linning,””Linsanity,” “Inlincible,” and “All I Do Is LIN LIN LIN” have taken the streets by storm and aren’t going away anytime soon.

A few other options, created in the wasteland that is my brain:

And last, but definitely not least:
THE VIOLIN

I swear, if everyone shows up at Madison Square Garden with violins, and every time he does something awesome the entire crowd starts aggressively doing bow work, it will be the greatest sports phenomenon of all time. This is the best idea ever, and the only good thing I have ever contributed to the world. You’re welcome, New York. This one’s on the house. With that said, the next citywide rallying cry will come at a steep price, either by way of a lifetime supply of steak from Smith & Wollensky or all-time next at Rucker Park.