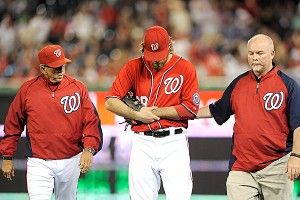 Nobody knows better than me the kind of battery throwing, Santa beating, and goat sacrificing that Philadelphia sports fans are capable of. I am guilty of at least two of those things myself. Nobody knows better … except for maybe Washington Nationals right fielder Jayson Werth.

On Sunday, Werth broke his wrist during the finale of a three-game series between the Nationals and Phillies. It was a home game for the Nationals, but as with any game within reasonable driving distance of the Schuylkill River, there was an abundance of Phillies fans at the game.

According to Werth (and I’m not doubting him, I’m just saying … according to Werth) Phillies fans aggressively heckled him when he went down injured, shouting, “You deserve it,” and, “That’s what you get.”

This, predictably, bothered Werth. In an email to The Washington Post, Werth said, “After walking off the field feeling nauseous knowing my wrist was broke and hearing Philly fans yelling … I am motivated to get back quickly and see to it personally those people never walk down Broad Street in celebration again,” he said.

I’m not saying Werth can’t be mad, but the whole “I will have my revenge, in this life or the next” bit? C’mon. Jayson Werth played 543 regular-season games for Philadelphia. I guarantee you he has heard worse things than, “You deserve it,” from Phillies fans.