Last year, Harrison Barnes, Jimmy Butler, Kawhi Leonard, and Paul George put on spellbinding, ceiling-raising postseason performances. They made The Playoff Leap. This was small-sample-size theater taking place on the biggest stage. That quartet of players has gone on to varying degrees of success and regression this season, but they all have one thing in common: They made their names in the playoffs.

This year, Toronto Raptors swingman Terrence Ross is the ideal candidate to join them. Ross has already mastered his role as sidekick to the sidekick on one of the league’s most enjoyable teams, and now he’s ready for more. His diverse skill set fills every moment with boundless excitement. His potential to energize everyone watching is enormous. If Ross makes a leap, it’ll fill the edges of nearly every conversation held by NBA aficionados throughout the offseason. And it’s something you won’t want to miss.

Most League Pass–less NBA fans know Ross from his Drake dunk at All-Star Weekend, or maybe from a GIF of the Raptors swingman showing off his lucrative athleticism with a cutthroat jumper.

In his second season, the 23-year-old Ross nearly doubled his points per game and punched his True Shooting percentage from 49.1 to 55.6 percent. He has started every game but one since Toronto traded Rudy Gay to the Sacramento Kings back in early December, and is knocking down 40.2 percent of his 3s — more than half his field goal attempts come from behind the arc — in those 58 games.

Ross’s shooting form looks like a leisurely snake attack. It’s deceptively fast, and the ball flies from his fingertips. In late January, he made a name for himself scoring 51 points (30 of which came off of 10 3-pointers) against the Los Angeles Clippers. (No article can be written about Ross without mentioning this performance. It was a magic show that fell from the sky.)

There’ve been others, too: like when he went 6-for-8 behind the arc in just 26 minutes against the Kings. Ross has scored more points off catch-and-shoot field goals than LaMarcus Aldridge, Serge Ibaka, and Bradley Beal this season, and is more accurate on catch-and-shoot 3s (42.3 percent) than Dirk Nowitzki, Kevin Love, and Joe Johnson, per SportVU.

He most often attacks off a screen, and does a great job identifying when it’s right to curl up from the baseline or fade into the corner, reading whoever’s chasing him like there’s eyes in the back of his head. It’s an understated but necessary skill for shooters to get the clean looks they need, but hardly what makes him most special. Watch how he (barely) eludes George here.

This all is wonderful, but not all he’s good for. Ross is a monster in transition, equally lethal spotting up for 3s (44.8 percent on 67 attempts, per Synergy) as he is absorbing contact with a strong finish at the rim — that or slithering past a defender with his liquefied Euro-step.

Here’s his shot chart since the All-Star break. He’s above average in every area where being above average is important. Since then, the Raptors are scoring 109.9 points per 100 possessions with Ross on the floor, which would be good for fifth best in the league over that span (a smidge better than the Miami Heat and Oklahoma City Thunder). 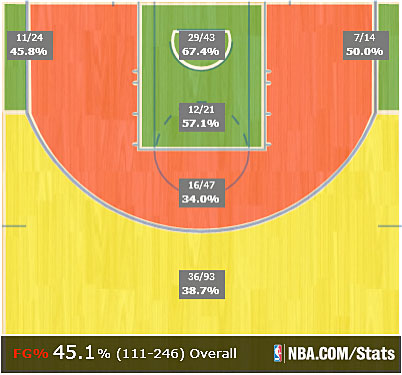 With Kyle Lowry, DeMar DeRozan, and Greivis Vasquez handling the ball so often, Ross hasn’t been asked to create too much off the dribble. But he’s shown hints of being a stellar in-between option someday. He already has a wonderful feel for the midrange floater, one of basketball’s trickiest shots. Ross turns the ball into a round teddy bear on those; it hugs the rim before safely plopping through. Happy.

But he won’t shine until he’s starting plays, too. He has 72 assists and 80 turnovers on the entire season. These numbers need to be placed in the aforementioned context of Toronto already having better facilitators than Ross handle the ball, but that doesn’t make them any less terrible.

Still, we see solid split-second decision-making every now and then. Watch him Medusa Roy Hibbert with a beautiful no-look bounce pass to Jonas Valanciunas.

While defenses focus on stopping on Lowry and DeRozan in the playoffs, Ross will have more of an opportunity to make plays for himself off the dribble. Less obvious, though, is the tantalizing upside on the other end that makes Ross such an intoxicating prospect.

He has the length and quickness to wreak constant havoc as an on-ball defender, and will usually spend time on the opposing team’s point guard or best perimeter scorer. In two recent games, those assignments were Paul George and Rookie of the Year favorite Michael Carter-Williams.

He harnesses his athleticism closing out on shooters, smothering his man and preventing a hard drive or open shot. Sometimes he’ll fly by a pump fake, but even then, his arms somehow manage to get back in the play for a solid contest. It’s exactly how Spider-Man would defend, if Spider-Man were real and played basketball.

Ross has a below-average PER, doesn’t rebound or get to the free throw line, and the Raptors are slightly better on defense when he sits. But good all-around play in the playoffs will temporarily blanket those flaws. We don’t yet know whom Toronto will match up against in the first round, and that stuff obviously matters (see: Barnes, Harrison), but sometimes it feels like Ross’s bubbling talent will render whoever’s guarding him irrelevant. (He wants the Brooklyn Nets, for the record.)

Watching almost anybody else use these playoffs to blast toward the next phase of their career would be half as fun.

Michael Pina covers the NBA for Sports On Earth, ESPN’s TrueHoop Network, FOX Sports, Bleacher Report, and The Classical. His writing can be found here. Follow him at @MichaelVPina.