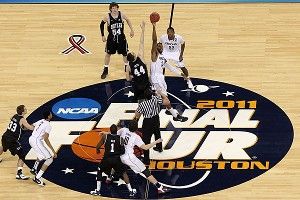 Last month, we asked a bunch of people we work with whether Ricky Williams was overrated, underrated, or properly rated. This month, we’re taking a look at March Madness. Does anyone honestly think this great American tradition is overrated? (Spoiler alert: yep.)

Chuck Klosterman
The NCAA basketball tournament is my favorite event of the year. I support it unconditionally. However, it’s become slightly overrated. I want to deny this, but I can’t. It gets hammered by its own potential. Part of this is because we only remember historical moments that are awesome (and then unconsciously meld them into one collective memory of what “the NCAA tournament” is usually like). Another part has to do with two things that have changed within the past 10 years. It’s possible both of them could be viewed as improvements, but it doesn’t feel like it.

The first is that the NCAA selection committee has gotten too good at its job. (I realize that’s a crazy thing to criticize, but it’s been a net negative on the overall experience.) The committee now seeds the tournament so precisely that the early rounds lack dissonance. We’ve exaggerated the import of the process. The brackets are way more accurate, but less compelling. In the not-so-distant past, the limitations of media kept college sports unpredictable. Easy example: Throughout the 1980s, it seemed like the New Mexico Lobos were habitually being shafted. In 1986-87, they won 25 games and still ended up in the NIT. And when analysts would try to explain why that happened, they’d concede that the members of the committee had not seen enough of New Mexico to give them the benefit of the doubt. They would almost admit they knew almost nothing about the program (and at the time, that felt like a problem). That could never happen now. I’ve somehow seen New Mexico play three times this year, and it’s not even my job. With unlimited media, nothing remains unknown; the committee makes fewer mistakes, and the seedings have become staggeringly reliable. Which was always the goal. The only problem is that the realization of that goal erodes the inherent unpredictability that everyone craves. The surgery was successful, but the patient died.

The other problem is that the elite teams are just campus-based AAU programs, which means the kids are primarily playing for themselves. Kentucky is the most unabashed example, but it is not alone. Do the players still want to win? Sure. But would they exchange a first-round NCAA exit in order to somehow move up three spots in the next NBA draft? Of course. They’ve been (somewhat justifiably) trained to think about themselves first. When a 14-year-old point guard travels the country on an all-star roster and then transfers to a different high school in order to play in a better league, he’ll unconsciously view himself as an unpaid professional. That will be his mind-set as a one-and-done college freshmen. Now, I don’t hold this against any player. I would feel the same way, were I in their position. (I’d probably go to Kentucky.) But it makes college basketball slightly different for everyone else. At this point, the various conference tournaments feel as meaningful as the Final Four. Will any game in April be as emotional as the Summit League championship? I wonder.

Mark Titus
Seeing as how anybody that I have any respect for thinks that March Madness is the most entertaining sporting event in the world, I don’t see how it can possibly be underrated, which is why I’m calling it both overrated and properly rated. It’s overrated in the sense that it’s a terrible way to determine the best team in the country. For example, George Mason was a cool Cinderella story in 2006, but if it would’ve had to play Connecticut in a best-of-seven series that year, there’s a good chance that UConn would’ve beaten George Mason by 20 in each of the next four games. Any team can beat any other team in just one game, which is why the tournament is awful at accomplishing its primary goal, but that’s also why it’s properly rated — it’s called “March Madness” because it promises to be crazy and unpredictable, and every single year without fail, it delivers.

Michael Kruse
The NCAA tournament is properly rated. Many think it’s one of the best sporting events of the year. That’s what it is. But the whole fill-out-the-brackets thing? TOTALLY OVERRATED. I don’t do it. I won’t do it. Because I want to be able to watch Montana beat Wisconsin or Harvard beat Vanderbilt or South Dakota State beat Baylor, and enjoy that unabashedly, without worrying about whether I “picked” them or not. You “had” Montana? You “had” South Dakota State? No. You didn’t HAVE anything. You don’t deserve to claim even the most peripheral form of ownership. Because it matters to the kids on those teams and their coaches in a way that it doesn’t and shouldn’t and could never matter to you. And because they don’t deserve to be depersonalized into pieces to be so cavalierly “picked” or not “picked” in some annual national gambling exercise. And because they also don’t deserve to be called “bracket busters” if they win. It’s insulting and selfish. The point isn’t that they’ve ruined your chances to win some dumb pool. The point is that they’ve done something unexpected, exhilarating, and empowering, for themselves and the people who know them, love them, and have invested in them. Your “pick” does not count as an investment. You say this gives you a reason to watch and to care? “Picks” make you care about the thing you’ve set up to give you a reason to care about the thing … NOT the thing itself. The thing is the thing. Your brackets are not. At stake in games over the next three weeks: goals, dreams, jobs, futures. That’s not enough for you? An interest based on brackets is an inauthentic interest. I want my interest (or disinterest) to be real.

Jay Caspian Kang
Depends on the year, honestly. If there are three to four buzzer-beaters by 6 p.m. EST on Thursday, the tournament has a completely different level of excitement than if the higher seeds advance easily. Nobody really cares about the Final Four or the championship anymore — really, who watched that Butler vs. Duke game? Does anyone even remember that Duke won a national championship a couple years ago? Or even that UConn won last year? At this point, the basketball’s so bad that you’re just hoping for a 15-seed to upend a hated no. 2.

Shane Ryan
Oh man, I made it through a decade of wars in Iraq and Afghanistan without ever saying these words, but if anyone actually believes March Madness is overrated, well … GET OUT! GET OUT OF MY COUNTRY! LOVE IT OR LEAVE IT! MOVE AWAY FROM AMERICA, YOU SONS OF BITCHES! UNITED STATES OF MARCH MADNESS! THESE COLORS DON’T RUN! AALSDJFASJFLAFJLADS GO DUKE!

Chris Ryan
March Madness is properly rated. I don’t really follow it as closely as I probably should, because every time I turn on a game, I see what looks like basketball but hear what sounds like a blacksmith shop. (Because of all the clanging shots.) (Tip your waitress.) But for whatever the basketball lacks, aesthetically, it more than makes up for in drama, headline creation, and star-making. (I still can’t watch Derrick Williams without thinking of his performance against Duke last year.) Also? The first Thursday and Friday have become unofficial national holidays, and I am definitely all for that.

There you have it. The final tally is:
Overrated: 1
Slightly Overrated: 1
Properly Rated: 4
“I Enjoy March Madness”: 1
Depends on the Year: 1

So … cleared that one right up, didn’t we?