Shane Ryan and Spike Friedman exchanged emails in an attempt to solve the greatest dilemma of our sports gambling lives.

Shane Ryan: Here’s the problem: Nobody has ever created a fun Sweet 16 pool. They say it can’t be done. The most common attempt is the reduced single-elimination bracket pool, which is like the real thing except worse. And then there’s … wait, I guess that’s the only kind of Sweet 16 pool I’ve ever been in. At least we’re starting with a pretty blank slate.

I have no idea where to turn first. Should we draft teams, and the winner is the one with the champion? That seems lame, especially for anyone who doesn’t get the first or second pick. Some kind of auction? Nothing is making any sense to me. Please provide a spark.

Spike Friedman: There is nothing that would make me angrier than receiving an email today saying, “So you’re bracket is in tatters? Want a second chance?” Whoever even thinks to send an email like that is the worst, and not just because they confused “you’re” and “your.”

I think, right off the bat, the problem with the concept is the lack of madness. Any Sweet 16 pool needs to compensate for the relative anticlimax that is the second tournament weekend. Because there are fewer games, and there is less action. Also, there is a lot of information out there on the relative strength of teams at this point. So we need a way to undermine that advantage.

This means lots of disorientation should be the goal. My first idea was that you have to pick the winner of every four minutes of game action. If it’s every four minutes, you have even more buzzer-beating action than you would during the first weekend of the tournament. Every game has 10 possible buzzer-beating moments! How exactly this would work? I’m not sure yet. But it’s surely mad.

Ryan: That is mad as hell. And you’re right, our history of inventing weird pools together makes us the only viable choice to make this thing work. I don’t want to say we’re saviors, but honestly, that’s what we are. So I’ll say it: We’re saviors.

Your disorientation idea is excellent. Instead of saying every four minutes, we should say every media timeout, which is essentially the same thing but gives us a defined place to measure, and one that’s easy to look up. I love this because it deals in chaos, but crazy people could do some legitimate research. Which team starts hot? Which is a second-half team? Which team is going to destroy the other so much that they’ll play their scrubs in the final four minutes? There’s strategy here.

With 15 games left in the tournament, and 10 four-minute sections per game, that’s 150 picks total. Should we maybe make it eight-minute subsections, to reduce it to five per game? Is this a good idea? Are we fools on an errand of folly? I’m getting a panicky feeling.

Friedman: When Vasco Núñez de Balboa crossed the isthmus of Panama, did he say, “Am I a fool?” Probably not. He spoke Spanish.

Also, four minutes may have been foolish, and media timeouts, while useful for the savvy such as yourself, would confuse the less savvy such as myself. Let’s make it 10 minutes. That way you have basically just rebuilt a 64-team bracket. 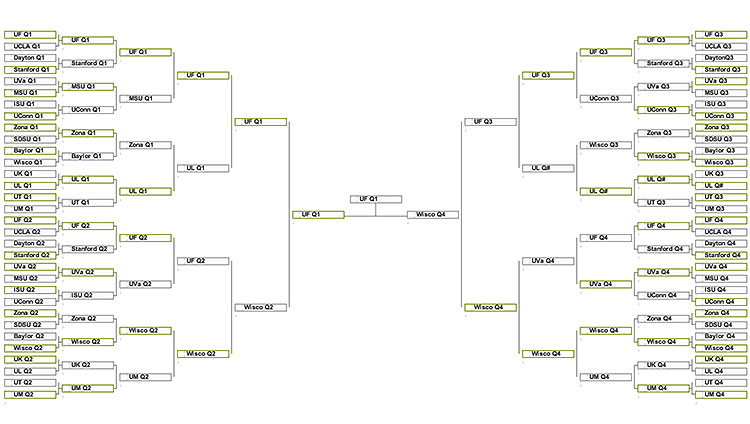 This is a terrible idea? Please make a better one.

Ryan: OK, I’m going to be honest and tell people that Spike and I had a really long Gchat just now, involving a lot of explanation, but the upshot is this: I like this idea. I’m going try to explain it a bit more, assuming that some of you, like me, feel initially confused by the chaos.

• The first round is straightforward. It’s just each team pitted against each other, by quarter, in the Sweet 16.

• Whoever wins that quarter, you get the points.

• The second round is a bit trickier, but involves a similar idea. These are the Elite Eight games. If you pick the first game wrong — let’s say you chose Stanford to win the Q1 region’s first round against Dayton, but Dayton won the game — obviously you can gain no further points from Stanford. Just like a real bracket.

• HOWEVER. If Stanford wins that quarter, but still loses the game, you get points for that win. And if you have Florida advancing to the “Final Four” round over Stanford, you still get points if they win the first quarter of the Elite Eight game, even though the opponent is wrong. Again, just like a real bracket.

• So that would bring us to the the Final Four of the actual tournament, with a ton of chaos and close games. I really like it, and it would make for an action-packed four days this week. And now is when I’d suggest we end the bracket phase, and go into part two of the pool, like the World Cup in reverse.

For the Final Four, I’m suggesting a WHOLE NEW BRACKET that lets everyone back in. This one would start off with all eight quarters for the Final Four matchups and narrow down to the four quarters of the final. Like so.

The downside of this is, you have to re-pick between rounds, but the upside is that you can choose between hedging your bets and going all out. It gives everyone a chance to sneak in an upset win even if their teams are gone after the Elite Eight. For points, I’d suggest going real simple: In Part A, points go 1-2-4, by round. In Part B, 2-4. Best combined score wins. Thoughts? Is this too convoluted for anyone but crazy diehards?

Friedman: This is clearly going to pay off only for those who watch all of the games. And I also want to add that we are well aware college hoops doesn’t have quarters. These are de facto quarters. De jure quarters are for children and people paid to play basketball.

And I desperately want a way for this to work without re-picking. And by “work,” I mean have as many people with skin in the game, come the finals. I also want reward those who were accurate on the journey to the end.

But I can’t do it. Much as Balboa was executed in Spain, I feel like we’ve ventured far without finding all the answers. That said, we’ve glimpsed the new world. I think we’ve come up with a system just crazy enough to not make me furious at the hypothetical email about it I could receive.

So let’s try it. I’m willing to commit to the re-pick. Maybe 3-6 for the point on the re-pick, to make it more relevant?

Ryan: I’m in, but I don’t know what to think right now. We’re chasing the white whale of sports pools, and it’s possible we’ve either harpooned it or been rainmade like every other chump. I’m so scared about this. I’m so scared for the moment when you forward me the hypothetical email that’s all too real. I’m with you on the 3-6 point structure for the re-pick. And we should add that the quarter ends when the clock reads 10:00, and not the first whistle after that.

Look, a lot of people are going to say this is too complicated. To them, I say this: If you’re not fully engrossed when the Sweet 16 games begin, I’ll return your money. Which is zero dollars and zero cents, because THIS IS THE INTERNET, YOU DICK.

P.S. I accept all your explorer facts as real.

Friedman: Don’t be angry, Shane. Be happy. Much like Balboa must have been when he first gazed upon the Pacific Ocean. Was he thinking about his future demise in the moment? Or was he basking in the thrill of discovery? We’ve discovered something. And in the frontierless America in which we now reside, that’s more than most can say.

But what use are explorers if they do not share their discoveries? So to test the quality of the pool, the first 20 people to email will be able to explore the heart of bracket darkness with us. The winner gets this mug.