Tim Duncan doesn’t make a lot of mistakes around the basket. In the first half of Sunday’s Game 1 between the Spurs and the Lakers, we were treated to the complete array of Duncan post moves. We think of the post as the place on the court where strength prevails, but Duncan is an example of how timing, balance, and execution are essential.

Post play is often referred to as a battle, and watching most players down there, you might come to the conclusion that it’s a Street Fighter–esque melee of attrition, full of overpowering combos and health bars being slowly but inexorably whittled away. You can see this when Nikola Pekovic is patiently grinding his matchup into dust, or when Dwight Howard is on his game and crushing opposing centers. That’s when it’s good. When it’s bad, it can look like a Tekken-ish mess of Eddy Gordo combos, executed with button-mashing fury but little overall strategy. 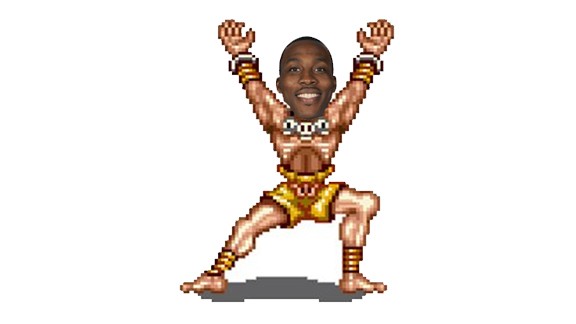 But Tim Duncan is different because Duncan knows it’s neither about taking what the defense gives him, nor about forcing his will onto his man. It’s about out-thinking his opponent, then striking.

Released for the original PlayStation in 1997 — the same year that Duncan was drafted — Bushido Blade was a different kind of fighting game. It took its inspiration from classic samurai films like Akira Kurosawa’s Seven Samurai (and possibly even more specifically from this scene). There were no health bars, no timer, no super combos — just two opponents with big, long swords. Players could shift through three different stances (low, middle, and high), with each bringing its own advantages and offsets in terms of moves, which were themselves reliant on momentum rather than how fast you could hit the buttons.

If this sounds incredibly awesome, please remember that it was 1997, and so the execution looks more than a little clunky nowadays. But a good match was like chess, with each player shifting stances, declaring intention with body language, shuffling forward a bit, and then retreating. Most of the game took place before the first sword was ever swung, and matches were often over in seconds.

A good match, in short, looked like Duncan in the post: almost totally calm, completely clinical, aware of and open to myriad paths and outcomes, and then precise in execution. He’s not perfect, but when he’s seeing the game like he was in the first half against the Lakers, he’s as good as any samurai ever was.

In the above video, his jab step gets Pau Gasol to shift to his left, then reach to his right. In the instant that Gasol recovers from that reach, Duncan moves hard into the lane. He bumps Gasol and smoothly drops the fadeaway.

Next, he demonstrates the art of the pivot foot, pulling Gasol in with a fake, pushing him back with a jab, then spinning away for the hook shot. It’s worth noting that Gasol is doing just about everything right, but Duncan just needs a slim opening to do his damage.

When he’s matched up against Howard, Duncan’s game becomes one of timing. He can’t beat Howard physically, so he faces him up. His first, short jab doesn’t move Howard off him. So he resets and jabs again, this time swinging the ball, and Howard backs up a step and shades him left. Howard thinks he’s denying Duncan the lane, but what Duncan has done is open up the bank shot. He waits a beat, then rises up and fires it in, fading softly to his left. It’s worth watching in isolation:

Lastly, toward the end of the second quarter, Duncan is matched up on Gasol again. Without much fanfare, he goes left, past Gasol and up for the reverse lay-in. Again, what’s notable here is Duncan’s timing. When he catches the ball, he waits, but not from indecision. Tony Parker clears out, pulling Steve Blake through the paint; Matt Bonner drifts to the top of the arc, where Howard has to respect his shot and worry about a defensive three-second call, and, with Kawhi Leonard on the arc, Metta World Peace has to reestablish a foot outside the paint to avoid the three-second call as well.

The instant that World Peace sets down his left foot, Duncan puts the ball on the deck. The other four Spurs are all above the arc, where the gravity of their solid 3-point shooting keeps their defenders from collapsing completely. It’s not a huge window for Duncan, but then again, he doesn’t need a huge one.

It’s not that the area around the basket isn’t a battleground for Duncan, it’s just that the principles and approach he’s working with are less akin to Street Fighter or Tekken and more akin to Bushido Blade.