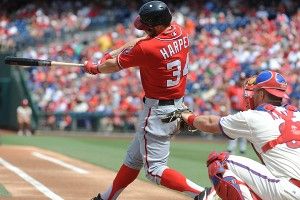 The Washington Nationals are hurting their chances by shutting down Stephen Strasburg. They’re also good enough to win it all without him. For that they can thank years of suffering, a fair bit of luck, and multiple shrewd acquisitions … many of them made by the same brain trust now getting creamed for the Strasburg decision.

The story of the Nationals’ success starts before they ever became the Nationals. More precisely, the failures that predated that success started with one of the worst systemic wastes of high draft picks in recent baseball history.

The final years of the Montreal Expos’ existence were unspeakably ugly, filled with boardroom backstabbing and the kind of austerity program that would make Greece’s meltdown look like a pizza party. Montreal’s front office was a skeleton crew, with bare-bones resources to do their work and a scouting staff that was a fraction the size of every team and no budget to pay talent, on the field or off. So when the Expos racked up a series of high draft positions due to perennially lousy play, all they got was a bunch of signability picks who went nowhere. The early days of the Nationals should have included an abundance of young talent, drafted, developed, and shepherded to the majors by the Montreal predecessors. Instead, the legacy of those late Expos years went by the names of Josh Girdley, Justin Wayne, and Josh Karp.

It’s little wonder that baseball’s return to Washington produced miserable results early on. The 2005 Nats did manage a .500 record, but the follow-up acts ranged from dull to disastrous. The ’06 Nationals went 71-91, trotting out a starting rotation of Ramon Ortiz, Tony Armas Jr., Livan Hernandez, Mike O’Connor, and Pedro Astacio that was even worse than you’d imagine. The ’07 team lost 89 games and started the immortal Nook Logan in center. The franchise hit rock bottom in 2008 and 2009, as the Nats lost 102 games, then 103, with replacement-level players littering the roster.

Fortunately, all that futility would come with an upside. When you stink and you’re broke, there’s a good chance you’ll continue to stink. When you stink and you have the money to pay high draft picks, good things can happen. For the Nationals, those good things were Strasburg and Bryce Harper. Granted, the Nats had to have the means and the willingness to pay their two no. 1 overall picks, with Strasburg collecting the biggest deal ever given to a player right out of the draft. Still, Washington bottomed out at exactly the same time that two generational talents happened to hit the draft. Those two picks alone more than made up for all the early misery that the Expos’ broke brass ended up inflicting on their successors to the south.

As good as Harper and especially Strasburg have been this year, and as great as they figure to become in the future, this is hardly a two-man team. The strength of the club, even beyond Strasburg, is the starting rotation. Ross Detwiler, the man who figures to take Strasburg’s place in the playoff rotation assuming the Nationals make it that far, was another first-round pick (sixth overall, 2007) who has fared well, parlaying a staff-high 52 percent ground ball rate into low home run totals (nine homers allowed in 140 innings pitched), a 3.15 ERA, and a 3.66 FIP. While Strasburg got all the press last year, it was Jordan Zimmermann who emerged as the young ace of the staff while Strasburg recovered from Tommy John surgery. A second-round pick out of noted baseball powerhouse Wisconsin–Stevens Point, Zimmermann landed on the Nats thanks to smart scouting, not high draft position. Though he’s no longer the team’s no. 1 starter, Zimmermann remains a top contributor, posting a 3.01 ERA, 3.62 FIP, and a strikeout-to-walk ratio of nearly 4-to-1 this season.

While Zimmermann and Detwiler were drafted before Mike Rizzo took over as general manager in March 2009, it’s the starting rotation’s other two members that you could argue are Rizzo’s two most fruitful moves. Rizzo got plenty of grief from various analysts when he dealt a ton of young talent (A.J. Cole, Brad Peacock, Tom Millone, Derek Norris) to get Gio Gonzalez last December. After all, Gonzalez was a terribly wild left-hander who’d walked a total of 183 batters in 2010 and 2011, leading the American League in walks one of those times. Skeptics wondered if Gonzalez’s moderate success could be attributed in large part to pitching in Oakland’s hitting death zone. He’s proven them wrong, posting the best strikeout, walk, and home run ratios for any full season in his career. The coup de grace was Edwin Jackson. Hitting the open market at age 28 after racking up 3.6, 3.8, and 3.8 Wins Above Replacement from 2009 to 2011, Jackson figured to fetch a lucrative long-term contract. Instead, no one bit and the Nats landed him on a one-year deal for $11 million. For that relatively modest sum, Jackson’s delivered career bests in strikeout (8.1 K/9 IP) and walk (2.8 BB/9 IP) rates and is on pace to be a three-plus-win player again in 2012. For comparison’s sake, the Marlins gave now-33-year-old Mark Buehrle a four-year, $58 million deal, and Buehrle’s trailed Jackson in nearly every major statistical category. Meanwhile, the Nats’ cheap and effective bullpen came with no free-agent acquisitions bigger than a one-year, $1 million deal for Brad Lidge.

But the biggest revelation has been the Nationals’ offense. Only the Cardinals, Brewers, and Rockies have scored more runs per game among NL teams than the Nats, despite Washington playing in a park that’s played as neutral to slightly favorable for pitchers. That seemed an impossibility earlier this year. All-Star third baseman Ryan Zimmerman hit the disabled list in late April and was hitting as low as .218 in late June; $126 million man Jayson Werth hit the DL himself in early May and missed nearly three months; 31-homer man Mike Morse, heisted for Ryan Langerhans three years ago, missed the first two months of the season; starting catcher Wilson Ramos was lost for the season by May 13. It wasn’t as if the Nats looked loaded even with all those players healthy. Adam LaRoche was coming off a season in which he played in just 43 games and delivered sub-replacement level production, while Ian Desmond stayed healthy but hit an abysmal .253/.298/.358. All but Ramos are now back, and most of them are raking. Werth’s hitting .324/.404/.478, LaRoche is on pace to top his career high of 32 homers, and Desmond’s having a career year, with 20 homers and a line of .289/.324/.504. Those numbers include the past two games, in which the Nats walloped 12 home runs, laying waste to the overmatched Cubs. According to Elias, the Nationals are the third team ever with six-plus homers in consecutive games.

There are others who deserve a share of the credit for the Nationals’ success. Dana Brown made great strides as a scouting director, parlaying that role with the Expos into the same gig in D.C. and hitting on Desmond, Zimmermann, and several other key Nationals contributors. Jim Bowden made his share of mistakes, but he also traded for eventual closer Tyler Clippard and other players making a mark this year.

As for Rizzo, he can count Morse and especially Gonzalez and Jackson among his greatest triumphs. His decision to put Strasburg on ice will make it that much tougher for Washington to advance deep into the playoffs. But just as Strasburg will have played a big role in getting the Nats into October in the first place, so, too, did Rizzo push the right buttons — and hold on to the right guys — in getting the team this far. That the Nationals have gone from an end-of-days scenario to arguing over whether a pitcher’s absence could affect the team’s World Series chances, all in a span of eight years, is already a big win. No matter what happens from here.