Every now and then, we will attempt to write the worst sports column on earth. Today: Let’s talk about one coach who lost his cool, and another who’s never been cooler.

Without winning, none of it matters.

It can be a lot to handle.

But there’s one job for a coach that’s more important than winning.

It’s a requirement that never gets written down, because it goes without saying. A college basketball coach is supposed to set an example, set a standard of excellence for everyone else.

It’s a promise that all coaches make.

Ranting, raving at center court, he stomped all over that promise until it shattered into pieces. You know what happened by now.

Syracuse’s C.J. Fair drove hard to the baseline to tie the game in the final seconds, put up a floater, and — wait! — a whistle. The shot dropped through the net, but just as Syracuse celebrated, it saw the official on the baseline, signaling a charge.

Then all hell broke loose.

Boeheim went charging onto the court screaming obscenities, the referee immediately (and correctly) tossed him out, and Duke shot free throws after two technical fouls to effectively end the game right there. Not only did the coach forfeit his own dignity in that moment, but he more or less forfeited the game.

If not for the technicals, Syracuse could have fouled after the charge call — which was clearly the right call — and maybe the team would’ve gotten one more shot to tie and send it overtime.

It was a stunning loss of composure from the entire team.

But especially the coach. 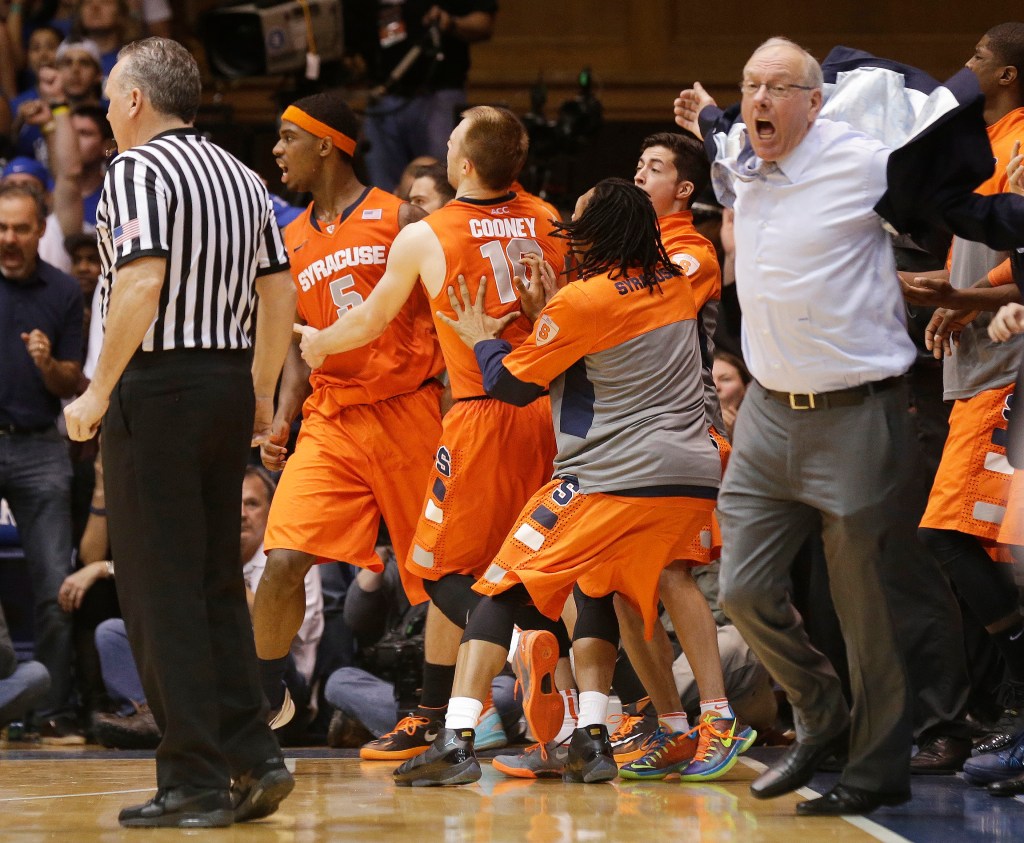 But for me, this isn’t a story about Jim Boeheim shocking us. It’s the other guy on the sideline that’s got me amazed.

Nobody said coaching college basketball was easy, but Coach K sure makes it look that way.

You want results? As empires crumble all over college basketball, Duke basketball is as good as it’s been in years. It won the national title in 2010, and with superstar freshman Jabari Parker on board, it’s gunning for another this year.

Next year? It has the no. 1 recruiting class in the country. Get ready for another bumper crop on Tobacco Road.

It wasn’t always like this for Coach K, of course. He’s a disciple of Bobby Knight, and he used to have a temper that would remind you of his mentor. Screaming at his players, cursing the refs from the sideline, berating reporters in his press conferences.

“Another great game,” he beamed after Saturday’s thriller. “I don’t know how either team could play any harder.”

This is warmer, gentler Coach K.

“I’m not surprised to see Jim’s fire,” Mike Krzyzewski said of his counterpart. “That’s why he is one of the greatest coaches in any sport.”

That’s how you take the high road. It’s the only route in Krzyzewski’s GPS these days.

He’s comfortable, he’s confident, and when it comes to competition, he’s full of compliments. Pure class.

An old friend used to say that a rising tide lifts all boats in the harbor, and I like to think you see it with Duke basketball all year long. Coach K’s excellence makes them all a little more excellent. 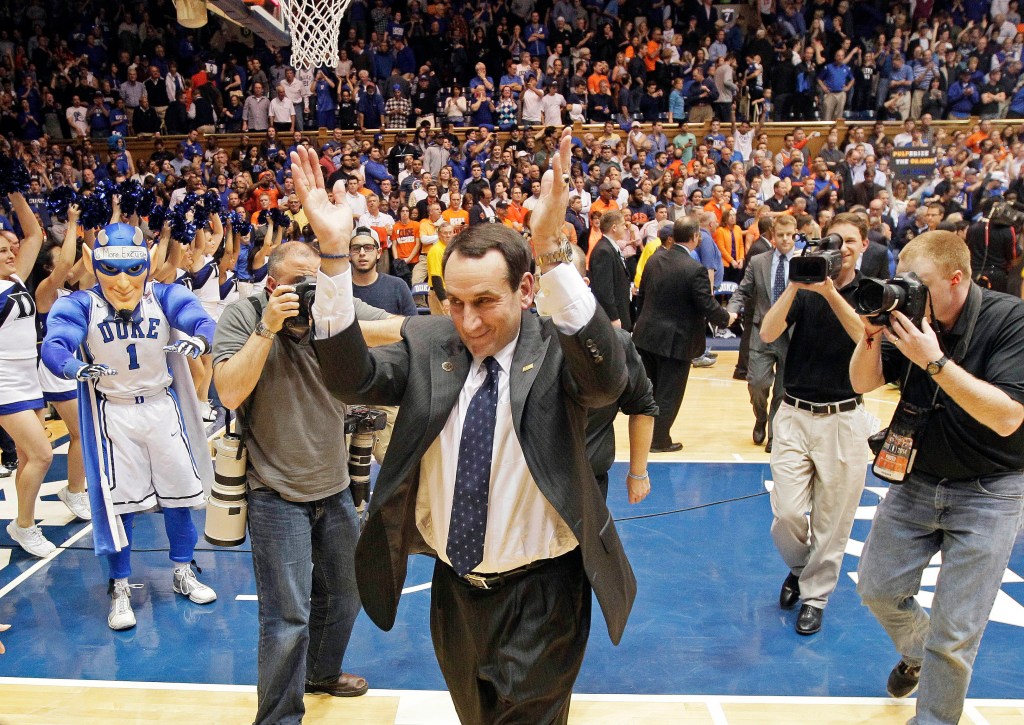 But what happens when the ship is sinking?

It was ugly and disappointing. In a sports world full of controversy, and a college basketball landscape dotted with incidents like the mess with Marcus Smart a few weeks ago, we need more teachers, more examples to follow. We don’t need more maniacs.

I’ve been in this business a long time, and you see people change in ways that are hard to watch.

We all get old, but some do it better than others. Boeheim is 69, and Saturday he looked like a man who’d lost his grip on himself.

It’s not uncommon for legends to lose their way as they head toward the end of the road. The temper gets a little shorter, patience runs thin. I’ve seen it happen over and over again. It all comes back to fear, I think.

Fear that maybe life’s getting away from them a little bit. Time’s running out, and they don’t have control of the scoreboard.

I don’t know if that’s what’s happening to Boeheim right now, but when things got away from him Saturday … well, you saw what happened.

Then there’s Krzyzewski at 67.

He’s climbed every mountain, he’s conquered every village, he’s been the shepherd that Duke basketball probably never deserved. But it got him anyway, and he’s better than ever, with the poise of a man who has nothing left to prove.

This could have been a column about an angry old coach who made a fool of himself, but what happened to Boeheim just made me admire what’s happening with one of college basketball’s true living legends. The man who sets a standard for all the other standard-bearers at schools around the country, including Syracuse.

In college, there’s no grade higher than K.

It’s just a joy to watch this unfold. Krzyzewski is older, wiser, and not going anywhere.

Most people get crankier as years pass, but others get classier. It’s a blueprint for living. We can all imitate him one day. In the meantime, let’s try to appreciate him now.

The seasons pass and the successes pile up, and Coach K just gets a little better every year. Like a fine wine.

And Boeheim? I don’t know. All I saw Saturday was sour grapes.