Every now and then, we will attempt to write the worst sports column on earth. Today: Let’s talk about Robert Griffin and common sense.

WASHINGTON, D.C. — Spend a day or two in our nation’s capital, and it won’t take long to find an argument. Everyone wants to play hardball, and you can’t help but get caught in the crossfire. Trust me, I’ve lived my whole life in this city. And you know what’ll really start a debate around here?

Bring up the Redskins.

Oh yeah, this town can filibuster about the home team all day long.

And that’s what makes it so remarkable — with RG3 controversy dominating headlines all summer long, nobody wants to touch the toughest talking point of all.

Context matters here. What happened in 2012 was incredible. RG3, the highlights, the playoffs … Once-in-a-lifetime stuff. Daniel Snyder deserves all kinds of credit, absolutely. Sometimes it seems like guts are an endangered species in this town, but Snyder had the foresight to trade up for RG3, draft Cousins, and stick with ol’ Iron Mike Shanahan. Just when we least expected it, the little general delivered. Big time.

Now it’s time for RG3 to do his part.

Take a seat on the bench. Be a leader.

He reaped a whole bunch of rewards last year — and when he was great, believe me, he was really great — but being part of the National Football League means sometimes you have to sacrifice.

Monday night, in the Redskins opener, it was obvious the superstar quarterback has taken a step back. We don’t want to read too much into one game, but he missed wide-open receivers, he turned the football over, and the Skins offense sputtered all night.

Meanwhile, over on the sideline there was Cousins, the healthy quarterback who’s undefeated as a starter, and all he can do is stay classy and watch it happen. 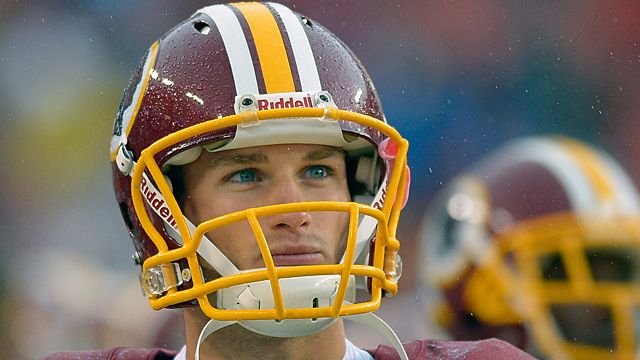 Did you know Cousins first made his name with Redskins by yelling “TEAM!” in every huddle he ever entered?

I wonder if RG3 ever heard him.

Griffin is 0-1 as a starter in 2013, and it’s not going to get better from here. Maybe he spent more time filming documentaries than watching film this offseason, who knows. But I watched the film Monday and wasn’t all that impressed. If he’s still hurt, continuing to play is just going to hurt everyone.

RG3 knows better than anyone that it’s on him to be a true leader and step aside. If not for himself, then for the best fans in football. For Shanahan, the man who coached him up all year long last season.

For Snyder, the man who made it all possible.

For the whole TEAM!

It’s not to say RG3’s career is over, but right now Captain Kirk gives this enterprise a better shot at flying high. I’m sure the media will make all kinds of excuses for RG3, say it’s blown out of proportion, and yeah, yeah, yeah. We all watched the game. Are you a truth warrior, or a victim of the popular narrative?

You know Shanahan wants it. If there’s one thing I’ve learned reading my playbook every morning, it’s that in a town full of politicos, sometimes you have to read between the lines. All that tension in training camp? Maybe Iron Mike doesn’t like what he sees. Maybe he’s been itching to call an audible since January.

Captain Kirk may not have the hype, but he has the heart.

It reminds me of something a politician once said. “It’s the quality of the ordinary, the straight, the square, that accounts for the great stability and success of our nation. It’s a quality to be proud of. But it’s a quality that many people seem to have neglected.”

It won’t surprise you that President Gerald Ford was one hell of a football player. Played offensive line and linebacker. A hog before The Hogs. He won two national championships at the University of Michigan. This guy knew what it takes.

“Truth is the glue that holds government together,” he said elsewhere.

You could say the same thing about a column.

Or a football team.

And you know, a good football team can hold a city together. Washington D.C. needs it now more than ever. With the country on the brink of blitzing Syria, the economy stuck in three yards and a cloud of dust, and jobs getting sacked every day, we’re all on the brink. It’s up to Shanahan’s boys to teach this city how to smile again and walk us back from the edge. It’s not a long trip for them to celebrate a Super Bowl at the White House, and Captain Kirk is waiting to steer that team bus across town.

But will RG3 give up the driver’s seat?

Will Coach Shanahan take the keys away?

What do you think?

There’s not much hope if they don’t make a change.