Every now and then, we will attempt to write the most infuriating sports column on earth. Today: Let’s talk about Johnny Manziel and Alex Rodriguez.

CHICAGO — I was in my car on my way to the ballpark Monday when a great song popped on the radio. I’m not a huge fan of new music, but this was a poignant, provocative jam from 1995. Joan Osborne’s “One of Us.” Maybe you’ve heard it. The song asks us to consider this question: What if God was one of us? Monday afternoon, it got me wondering.

If God was one of us up in the cheap sheets, what do you think he’d make of guys like Johnny Manziel and Alex Rodriguez?

Would He cheer ’em or jeer ’em?

They say evil prospers when good columnists write nothing, so let’s play it straight today — Johnny Hotshot sold out his teammates, his coaches, and college athletics as a whole, and on the other side of the sports page, A-Roids is an ongoing national disgrace, making a mockery of the pinstripes and anyone out there who still believes in baseball.

They’re punks, both of ’em. Plain and simple.

Your true nature reveals itself when nobody’s looking, and guess what?

When nobody was looking, A-Roids was allegedly injecting himself with all kinds of steroids, full of arrogance and apathy. The perfect superstar for the “Who Cares?” generation.

When nobody was looking, Johnny Selfish was allegedly in some backroom in Miami collecting a big ol’ check, signing mountains of memorabilia. Signing away his integrity.

But hey, who cares about the rulebook?!

These days, for every clown who breaks the rules you have a hundred columnists coming forward to say it’s not really their fault. For instance, I was reading this long article on Johnny Manziel last week. I didn’t even finish the piece because the apologizing and rationalizing was so ridiculous. Why should we feel bad for Johnny Goofball?

As the article notes, “His mother remembers the moment she first understood that the change was affecting her son. After the shocking Alabama win, the one that earned Johnny the Heisman, a crowd gathered near the Texas A&M bus, pushing forward, crushed together, trying to see the star emerging from the locker room. Michelle watched as state troopers battled their way through the crowd with him. She saw the look in his eyes, one she’d never seen on a football field: panic and fear … The Manziels are tired of a coach getting a million dollars and their son getting an appointment with a therapist. They’re tired, and they’re scared, because they’ve seen the pressure build and build, and they don’t know what might happen next.” 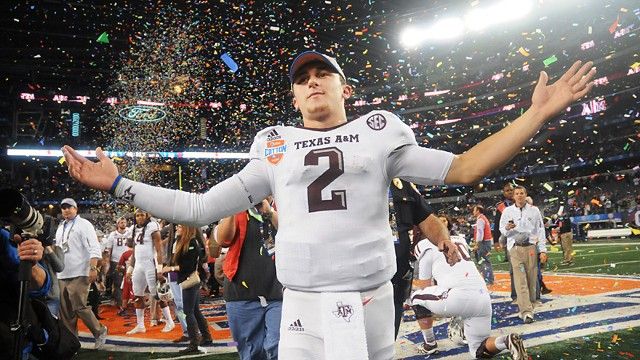 How could anyone possibly succeed after winning a Heisman Trophy early in college and becoming a superstar with sky-high expectations and constant scrutiny?

All I know is Tim Tebow seemed to manage just fine. This isn’t rocket science, Johnny. Just put your head down and play for your teammates.

The same thing’s happening with Alex Fraudriguez. At Monday’s press conference, A-Roids had plenty of excuses, but not many answers. “The last seven months have been a nightmare,” he said. “Dealing with a tough surgery and a rehab program, and being 38. Obviously disappointed with the suspension. But this is not the time to go into all of that.”

“I’m sure there’s been mistakes along the way,” he added. “We’re here now.”

He’s human like anyone else. We all make mistakes, don’t we?

Give me a break. You know who’s aging, and human, and rehabbing injuries? Derek Jeter. He seemed to do it all without making a mockery of the pinstripes. With Roidsriguez and Johnny Nightmare, we have the same problem now. Don’t tell me the system works when these guys deny, deny, deny, and still get to play.

At this point, apologies and suspensions aren’t enough.

You can’t put a Band-Aid on a bullet hole.

It’s a shame, but as Roidsriguez said Monday, we’re here now. So when I was listening to Joan Osborne ask the tough questions yesterday, I found myself changing the words.

What if a FRAUD was one of us? Getting rich right in front of us.
Behind closed doors, making fun of us. Mocking all our faith and trust.
Just trying to cheat his way hoooooooome.

Think about that question next time you watch sports.

Alex Rodriguez and Johnny Clownshoes might be free for now, but the truth is out there, and Judgment Day is waiting for everyone. Sooner or later, we all have to face the music.