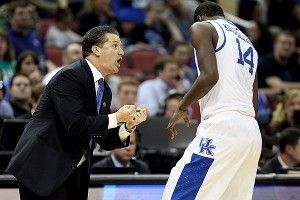 I was a teenage John Calipari recruit. You have not read about me on Rivals.com. There are no YouTube compilations of me going off against Oak Hill Academy. I never even played for the man. But, in a fashion, the commitment I made to him lasted longer than any of the stops Calipari has made in his professional life.

When I was a kid, I knew a lot about college basketball (in so much as I memorized Street & Smith’s College Basketball Annual). But when you’re young, your allegiances aren’t as logical and geographically rooted as they are when you grow up. I liked Syracuse because of Stephen Thompson and Sherman Douglas. I also liked Villanova because of Rollie Massimino’s championship team. These things had no rhyme or reason; I just liked who I liked.

And I liked John Calipari and UMass. These are memories, so I’m not interested in overly researching them (it’s kind of beside the point), but I always liked the squads he put out and the way they played. I liked Marcus Camby, Lou Roe, Carmelo Travieso, and Will Herndon. I liked the guy’s teams when I was young and I went on liking them, even when I went to Temple in the mid-’90s and students walked around campus with T-shirts emblazoned with “Fuck Calipari,” following his famous altercation with legendary Temple coach John Chaney.

In 1991, John Calipari brought his UMass Minutemen to Philadelphia for the Atlantic 10 Tournament. UMass, like most of the out-of-town teams, was staying at the Franklin Plaza Hotel, off the Parkway, right across the street from my school. I was in eighth grade.

My dad worked at one of the Philadelphia newspapers at the time. Through some called-in favor or another (he probably bought one of the sportswriters a drink), he managed to get me an interview with Calipari for my school newspaper. Even though I was in middle school, this would run in the high school edition. It was, relatively speaking, my big break.

You know how sometimes you’ll meet someone new, through a friend, and he’s a dick, and your friend explains that new person’s behavior by saying, “Well … he’s nice to me!”? I hate that.

But that’s exactly what I am about to tell you about John Calipari. I know that he is (allegedly) a magnet for NCAA rule violations, and kind of a front-runner when it comes to his job-hopping. And in later years, he would not exactly comport himself with a ton if dignity in his dealings with other journalists. Or the Latino community.

But this guy was nice to me. He didn’t just agree to do an interview with a 14-year-old, he did a 20-minute interview. He used my first name when he responded, and looked me in the eye and told me my questions were excellent. (“Why do I press full court? That is a really great question, Chris.”) Relaxed, kind, very, very funny. It’s not hard to see why he’s so good at convincing high school basketball players who could go anywhere in the country to come play for him. There’s a quality certain people have, the ability to make you feel important. John Calipari didn’t just make me feel like I was the only guy in the room, he made me feel like I was the only guy in the world.

There’s something a little less craven at work than me simply being seduced by Calipari’s renowned charms. But it’s even more memorable for me. John Calipari did one more thing I will never forget. He made me impressed with my father.

At some point, in the beginning of the interview he made some comment about how my dad must be a pretty big deal for him to make this whole thing happen. Maybe he was being sarcastic, but it really didn’t seem that way. I remember being rocked by this. Was my dad cool? Did my dad … pull strings? I guess I just thought 14-year-olds interviewed Atlantic 10 coaches pretty regularly. It didn’t occur to me that my dad, this guy who told me to brush my teeth and gave me a hard time about not trying in algebra, was actually cool.

My dad passed away last year. I am cheering for Kentucky because I think Anthony Davis is a unibrowed pterodactyl. I think Michael Kidd-Gilchrist is a freak. Also? Heat is my favorite movie and Kentucky superfan Ashley Judd is in it. But beyond all that, John Calipari made me love my father just a little bit more. I will never forget that. What can I say? I’m an easy recruit.