“Football’s a test of a man’s will against another man’s will,” Hue Jackson told us last night on Hard Knocks. “Who’s going to break first? Who’s willing to get dirty? You gotta hunt, man. You gotta hunt. Gotta make people say uncle.”

But before all that, there was the rookie talent show.

This is a Hard Knocks staple, of course, as it probably is at every training camp across the NFL: Eight to 10 rookies dress up in stupid outfits and make fools of themselves in front of the entire team. This has gotta be one of the only training camp traditions that people actually enjoy. And the Bengals rookies really made the most of their opportunity this year. We began with the skit where they mocked the Bengals coaches obsessing over any little bruise on A.J. Green and ignoring injuries to anyone else.

Then the look-alikes, where we found out which players look like Will Smith and Butterbean, and who looks like the Shark from Shark Tale.

And then there was a film session with Estonian rookie Margus Hunt (via SB Nation): 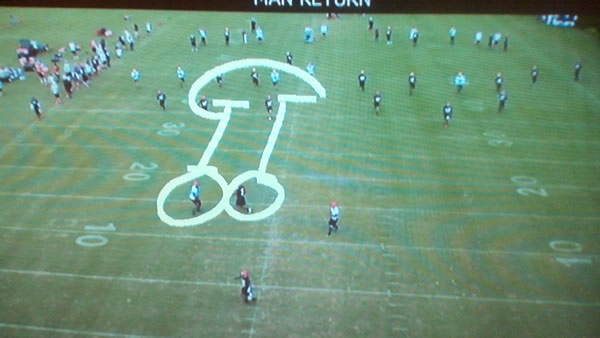 Marvin Lewis was especially amused by the projector penis there.

You can’t convince me that projector penises don’t get drawn in 80 percent of all NFL position meetings, but it was still great to see Margus getting in on the fun. All of that was more than enough to make the rookie show a success, but then came wide receiver Roy Roundtree and his RUTHLESS Taylor Mays impression, and it put the entire thing over the top. We don’t have video, but he kind of made Mays look like an androgynous, overzealous exercise instructor, and he clearly nailed it because the room went insane. Long live the Rookie Talent Show.

Ninety percent of the time you watch football it’s framed as some hardass gladiator blood sport, but Hard Knocks is our weekly reminder that football is a ridiculous sport full of ridiculous people. If you ever forget that, just remember Margus Hunt’s penis blocking scheme and a room full of grown men who think that’s the funniest shit in the world.

As for the rest of Episode 3? A few other lessons.

1. James Harrison loves pain. You’ll be shocked to know that James Harrison has a high tolerance for pain. On Tuesday we got to take a trip to the acupuncturist with our favorite psychopath linebacker, and the acupuncturist reported that when she first saw Harrison he asked what was the most needles she’d ever given anyone (232, to Curtis Martin). The next time, he demanded that she give him 300, which is now his regular treatment. To put this in perspective, Harrison’s teammates asked for the same treatment, got it once, and told her to never do that to them again. The legend of James Harrison lives on.

Mostly, though, the Harrison segment is notable because the only thing more terrifying than regular James Harrison is James Harrison lying naked on a table with 300 needles sticking out of him and only a thin towel covering his butt crack. That image is 100 percent going to pop up in my nightmares sometime in the next three weeks.

2. Nope, sorry, not crying for Aaron Maybin. Watching guys get cut is typically the hardest part of any Hard Knocks season. You watch some 24-year-old kid have to turn in his playbook and fight through tears and beg for one more chance, and at the end you just want to give him a hug and tell him everything’s gonna be all right. It’s awful. I’m sure we’ll get there with this year’s Bengals. But Tuesday’s episode was nothing like that. We met Aaron Maybin in the opening scene — he was painting in an art studio somewhere — and as the episode unfolded it became clear he wasn’t going to last.

This was crucial. We could prepare ourselves.

Just as important: Maybin seems like a smart, thoughtful dude, and if nothing else, the scenes with him painting and talking about his outside interests were reassuring. He can survive without football.

Most important of all: Aaron Maybin was the no. 11 pick in the draft a few years ago, so it’s not like he’s an undrafted rookie having his dreams shattered. It sucks that the NFL hasn’t worked out so far, but Aaron Maybin got PAID already, and he’s still pretty healthy, and young, and (again) incredibly rich. All things considered, Maybin getting cut might have been the most painless release in Hard Knocks history. We are all grateful.

3. Shout-out to Tony Siragusa. The one thing we found out during Maybin’s good-bye meeting with Marvin Lewis: The coach has this Sports Illustrated cover hanging in his office for some reason.

I know Marvin coached that Ravens team and all, but it’s still pretty baffling. No amount of professional pride is worth staring at Tony Siragusa every day you go to work.

4. Training camp wisdom. After starting safety George Iloka broke his hand punching another player’s helmet during practice, he was asked what he learned from the mistake. First: “Don’t let my emotions get the best of me.”

Then: “If you’re going to punch him, take his helmet off first.”

5. Iron Man has Gwyneth Paltrow. Taylor Mays continues to easily be the corniest character on the show, and I can see why some might hate him. But I think I kinda love him. When he’s not cuddling or playing Uno with his girlfriend, or getting beaten in coverage, or getting roasted by his teammates, or collecting children’s backpacks, he’s probably discussing superheroes.

“Iron Man has Gwyneth Paltrow,” he said out of nowhere last night.

I don’t know if this was building on his discussion of superpowers earlier in training camp, or if this Iron Man discussion was just a completely separate thing. Either way.

“I’m not that in to Gwyneth Paltrow,” he explained. Then he catches himself, so as not to offend Tony Stark. “But Gwyneth Paltrow has a good personality.”

Then a teammate mentions Tony Stark’s superpowers and ability to land any woman in the world. “But Iron Man has Gwyneth Paltrow,” Mays says, noting the hole in his logic.

So, there you go! Thanks for that, Taylor Mays. 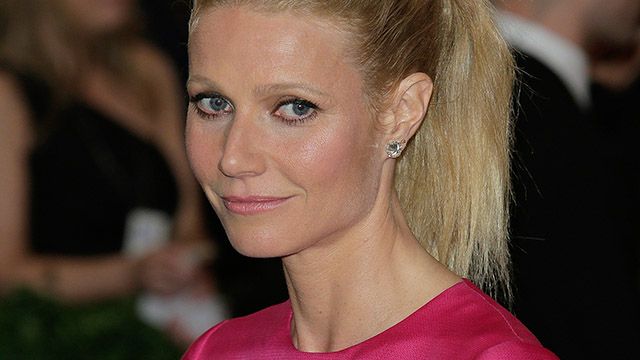 Until next week … Football is all about one man’s will against another man’s will, and you gotta hunt, man. It’s all about who’s willing to get dirty. And Iron Man has Gwyneth Paltrow. Let’s go Bengals.