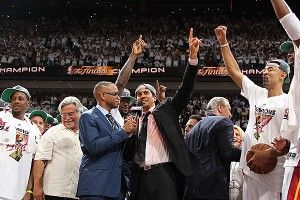 Last August, I watched Miami Heat coach Erik Spoelstra hoist a giant jug of coconut wine in his uncle’s backyard in Los Baños, Philippines, and tell his family that next year, he hoped to bring back an NBA championship trophy. It was the closest Spoelstra, the famously self-effacing and tight-lipped coach, would come to bluster during the week I spent following him through Metro Manila and nearby provinces. Back then, the lockout rules forbid him from even uttering the names LeBron James and Dwyane Wade, but I heard from coaches in the local professional league that Spoelstra spent more time questioning them about their offensive sets and strategies for breaking zone defenses than holding forth on what it was like to coach two of the best five basketball players on the planet. When I got to speak with him, our conversation followed a similar pattern: He asked me about life in the Philippines, how to hail a jeepney in Manila, and how weird it felt to call next in a street corner pickup game when I was a 6-foot-3 white guy. Now, there are hundreds of factors that go into making a championship team and coach — luck being a pretty damn big one — but I think Spoelstra’s patience and open mind are important aspects of his success. The man seemed to treat every experience as an opportunity to learn something new and useful, and that seems like as good a recipe for improvement as there is. This year, Spoelstra and the Miami Heat certainly improved on their finish in the 2011 NBA Finals, and though there’s really no way to improve on “NBA champions,” Spoelstra will keep searching for ways to learn more about his craft and the world, and to make himself and his team even better.


This article focuses specifically on Spoelstra’s relationship to the Philippines, and the way the country has embraced him back. But no look at Spoelstra would be complete without including Kevin Arnovitz’s June 2011 comprehensive account of Spoelstra’s NBA career. It’s presumptuous of me to consider them companion pieces, but I’m going to do that right now, because it would be an honor to have my article stand next to his.