Gennady Golovkin, perhaps the best middleweight boxer in the world, is an athlete you want to share with people. Watching his fights in person or on TV, you get the sense that you’re witnessing something special, from the splendiferous, gold-embroidered navy blue robe he wears for his ring walk, to the dismay that spreads across his opponent’s face after he’s first touched by Golovkin’s jab, to the polite curtsy he performs four times — once for each side of the ring — after he finishes his bruised and woozy rival. He’s like the brilliant line in a short story that makes you call your mother and read it aloud to her or the new song you happened across on YouTube that you forward to friends with the question, “YOU HEARD THIS?!?”

There’s no good reason for me to be so proud that I dragged my father up to a dreary casino in Verona, New York, two Septembers ago to watch Golovkin’s U.S. debut, a fifth-round TKO over a Polish fighter named Grzegorz Proksa. But I am. It’s my way of paying him back for letting me play hooky in the late ’80s so we could take the subway out to Shea Stadium and watch Dwight Gooden pitch. And when Golovkin fought for the first time in California on Saturday against veteran middleweight contender Marco Antonio Rubio, I made sure the old man was with me again. 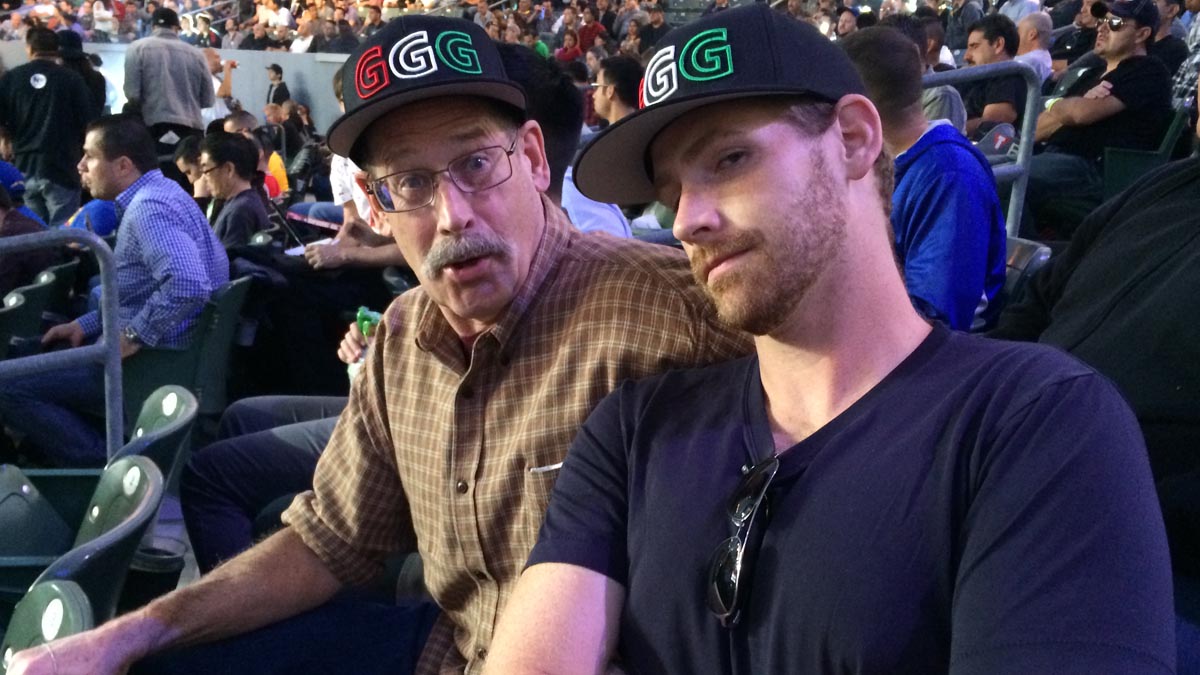 The Kazakh champion didn’t disappoint. It took Golovkin less than two full rounds — a shade under four and half minutes, altogether — to knock out Rubio, who became the 18th straight opponent to lose to Golovkin by stoppage. It was exactly what we paid to see and expected to witness: a thunderous uppercut snuck beneath Rubio’s guard, Rubio’s backward stumble, a Golovkin flurry along the ropes, and then a looping left that, to paraphrase HBO analyst Roy Jones Jr., jammed Rubio’s neck down to where his chin was supposed to be.

So why did the whole GGG experience feel underwhelming this time around? The opponent is partly to blame. Hardly anybody expected Rubio to win, but many boxing experts predicted he would at least be durable. Over the past two years, Golovkin’s challengers have more or less fallen into two categories — those who get bulldozed in quick, stunning fashion and those who fall into a defensive shell and submit to a seven- or eight-round drubbing that grows increasingly grim as the end draws near. Rubio had a slight size advantage1 and the experience to suggest he’d fall into the latter category. Instead, he was flattened, with a knockout that came so soon Golovkin barely had a chance to dazzle.

Aided, perhaps, by weighing in almost two pounds over the 160-pound middleweight limit.

The demolition of Rubio doesn’t change what boxing fans already knew about Golovkin. On the roster of respectable middleweight contenders whom Golovkin has defeated in recent years, Rubio ranks somewhere between Daniel Geale (at the top end) and Nobuhiro Ishida (the pits). We know what Golovkin does to this level of opposition. How will he look against naturally bigger men, slicker boxers, and fellow world-class fighters? The answers are all other questions: Will Canelo Alvarez or Miguel Cotto agree to face Golovkin? Will Andre Ward resolve his promotional disputes and get back in the ring?2 Will Carl Froch retire before he fights Golovkin? Can In-N-Out Burger host a potential clash with Julio Cesar Chavez Jr.? (Because if so, Julio is down.)

The one, unequivocal truth about Gennady Golovkin is that he gives the best post-fight interviews in boxing:

“Mexican Style” and the Canelo Question

When Golovkin first said “Mexican style,” during his tête-à-tête with Max Kellerman after the Geale fight, the phrase seemed like another entry in his catalogue of imperfect English aphorisms. “This my style, like Mexican style” seemed no different from calling an opponent “good boy” or declaring “I respect box.” But Golovkin’s promoters latched onto “Mexican style” and turned it into the basis and tagline for an entire event, the goal of which was to win the hearts of one of boxing’s strongest constituencies — Mexican and Mexican American fans. (It’s a wise audience to court, especially for a fighter like Golovkin, who lacks a large ethnic fan base in the States. In early October, a ho-hum featherweight championship fight between Jhonny Gonzalez and Jorge Arce drew 28 million viewers on Mexican TV.)

They brought in Rubio, an opponent who is well-known but not great enough to be beloved in Mexico. They printed hats with Golovkin’s nickname, “GGG,” sewed on the front in the green, white, and red of the Mexican flag. They commissioned a song by Mexican American rappers Mario Ruiz and Omar Cruz to explain that although Golovkin is not Mexican, he fights like one (i.e., he’s a constant aggressor, never backs down, and is so macho he can walk through an opponent’s punches to land his own). And yes, it’s called “Mexican Style.”

In any sport besides boxing, this sort of ethnic appropriation would probably be considered offensive. But the larger sports world seems to treat boxing as if it exists in a parallel universe — some Hobbesian moral purgatory where brain injuries, official corruption, and a sometimes impolite bluntness about race are just part of the sport. Boxing fans are generally comfortable in their bubble of disrepute, so it was no surprise that Golovkin’s “Mexican style” gambit was a huge success. He attracted a record crowd of 9,323 to the StubHub Center in Carson and inspired many in the largely Latino crowd to wear “Mexicans for Golovkin” shirts.

Golovkin is not the first active fighter from a country other than Mexico to claim it as his spiritual boxing homeland. He’s not even the second. Featherweight titlist Evgeny Gradovich fights under the nickname “The Mexican Russian,” and Jamie Conlan, a rising junior bantamweight from Northern Ireland, simply calls himself “The Mexican.” Yet neither Gradovich nor Conlan have been as wholeheartedly embraced by Mexican fans as Golovkin was Saturday, and that’s probably because Golovkin is so good, so thrilling, and so fun to watch that boxing fans don’t need an ethnic-based rooting interest to find him compelling. Saturday night, I got the feeling that when the crowd, full of Mexican, white, Filipino, and black fans, chanted “TRI-PLE G! TRI-PLE G!” their enthusiasm had a lot more to do with Golovkin style than “Mexican style.”

An unintentional benefit (or perhaps not, if you belong to the tribe of boxing conspiracy theorists) of Golovkin’s “Mexican style” shtick might be to anger Canelo and lure him into challenging Golovkin sooner than expected. Canelo is Mexico’s biggest boxing star of the present and the foreseeable future. He has been vocal recently about his desire to take back the dates around Cinco de Mayo and Mexican Independence Day in September (which have traditionally been reserved for Mexican fighters) that Floyd Mayweather Jr. has been squatting on in recent years. It’s hard to imagine that Canelo, who has also been hinting at a move up to Golovkin’s middleweight division in the near future, could feel anything but ire while watching a foreign rival delight the largely Mexican crowd in Carson with a few bits of guidebook Spanish and then refer to Canelo as a “good boy” later in the HBO interview.

Now, it’s foolish to expect boxers and their handlers to be motivated by anything but their projected earnings when they decide who they fight. But if “Mexican style” somehow manages to fast-track a Canelo-Golovkin bout in 2015, I’ll be the first to utter “muchas gracias, champion.”