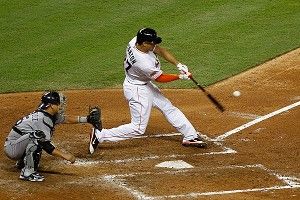 If you missed the action in Miami on Monday night, here’s video of Giancarlo Stanton hitting a grand slam and temporarily breaking the Marlins’ new scoreboard.

Watching that clip, it’s hard not to think about the scene from The Natural in which Roy Hobbs’s home run smashes the lights at the New York Knights’ Stadium to win the pennant in a one-game playoff against the Pittsburgh Pirates.

But while it’s tempting to compare the two, it’s important to remember that Hobbs is a hero. Here are 11 reasons why Stanton is nothing like him, and never will be.

1. Roy Hobbs is bleeding, like Curt Schilling except with actual blood instead of ketchup. Stanton? No blood to be found. Verdict: coward.

2. Hobbs’s team, the New York Knights, is fictional. But at least they play the Pittsburgh Pirates, a real team. Stanton’s fictional club, the Miami Marlins, played the fictional Colorado Rockies in a game no reasonable baseball fan can believe in.

4. Hobbs gets his big shot in the majors when an outfielder named Bump dies running through an outfield wall. Stanton didn’t earn his chance the old-fashioned way, by watching a teammate die on the field. My take? Coward.

5. Hobbs forged his bat, “Wonderboy,” from a tree that had been split in half by lightning. Stanton forged his bat, “Giancarlo Stanton,” while staring in a mirror. At least that’s what I heard. Might have been A-Rod, now that I think about it.

6. Hobbs had an awkward exchange with a loyal, pudgy bat boy that lasted a full 90 seconds. Stanton tried to introduce legislation into the Florida statehouse banning bat boys from major league baseball. Stanton hates kids, and also has a poor understanding of the legislative process.

7. Hobbs was surrounded by hard-core New York fans in an era when baseball was king. Stanton was surrounded by people from Miami who spent nine innings wondering if it would be warm enough to roller blade in a tank top after the game.

8. Hobbs’s home run was set to Randy Newman’s classic theme, one of the most inspirational pieces of music ever. Stanton sang Katy Perry’s “Firework” under his breath as he rounded the bases.

10. Roy Hobbs persevered despite bribes from “The Judge,” the owner of the Knights who wanted his team to lose for financial reasons. This is in stark contrast to Stanton, who plays well in order to help facilitate Jeffrey Loria’s next heartbreaking fire sale. I hate to use the word “coward,” but … coward. Coward, coward, coward.

11. Hobbs was shot at age 19 by an obsessed woman who tries to kill great athletes. Stanton is 22, and has only been attacked by Hanley Ramirez. BOOO-RING.