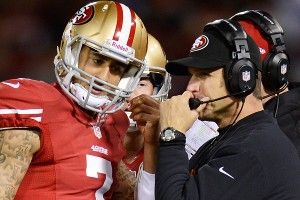 Well, very few people expected to see that. Although there were always rumors circulating that Colin Kaepernick would impress if the 49ers ever gave him the opportunity to take on their starting job, Kaepernick’s stunning performance with little advance warning against the Bears last night put Alex Smith — and the rest of the NFL — on notice. While the Jason Campbell–led Chicago offense offered little resistance in terms of making the game a contest, the defense Kaepernick ripped apart had no backups to blame or excuses to make. After holding their first nine opponents to an average of 14.8 points per game, the Bears allowed 20 points to Kaepernick’s offense within the first 24 minutes, and finished the game giving up a season-high 30 points, with the Niners tacking on two points with a bizarre fourth-quarter safety. What on earth happened in the Bay Area last night?

We’ll all get a better idea when the coaches film for the game comes out later this week, but on first viewing, it appeared to be a combination of a great game plan and excellent execution from a player everybody wrote off as raw. Jim Harbaugh’s brilliance in designing offensive attacks for a given opponent isn’t breaking news, but despite missing practice time this week to have minor heart surgery, Harbaugh’s game plan to attack the previously superb Bears defense was a doozy. With Chicago’s cornerbacks playing out of their minds this year, Harbaugh simply did his best to build a scheme that avoided them altogether, leaving likely Pro Bowlers Tim Jennings and Charles Tillman as onlookers.

Instead, Harbaugh went after the weak links of the Chicago defense: the safeties. Every year, it seems like the Chicago safeties, regardless of who they are, seem to combine for one abysmal game that makes you look back and wonder why anyone ever thought the Bears defense was any good. Last year, that game was the 24-13 Monday Night Football loss to the Lions. Monday night’s loss might have been even uglier. The 49ers produced several big plays against the Bears by exploiting safeties Chris Conte and Major Wright in coverage, repeatedly using corner routes from elite athletes like Vernon Davis and Kyle Williams to create separation and produce big plays. When it wasn’t Conte or Wright, the 49ers were able to take advantage of a relative lack of speed from the Bears linebackers. As good as Lance Briggs and Brian Urlacher are at using their instincts to read plays, their advanced age means that they can’t keep up in a footrace with Davis. Briggs gave it his all, but that’s a duty very few linebackers can pull off.

The 49ers were able to exploit those weaknesses in part because the Bears dared them to. With Kaepernick’s relative inexperience under center and his history as a running quarterback (both at Nevada and during his brief NFL career to date), the Bears pushed Wright into the box and forced Kaepernick to make adjustments before the snap against an eight-man front. Would he be brave (or effective) enough to kill the running plays that they would likely hit the line with and throw downfield? Obviously, you know the answer was yes. Kaepernick threw the ball on eight of San Francisco’s first 12 plays from scrimmage, and by the time he was done, the 49ers had a 10-0 lead that they would never relinquish.

Chicago also helped Kaepernick out by playing schematically into his hands. As my colleague Chris Brown noted on Twitter during the game, the Bears often line up and use a Cover-1 “Robber” scheme that flows right into the box for run support, leaves their cornerbacks in man coverage on the sidelines, and leaves two players in zones over the middle of the field. Conte is the lone safety covering the deep middle, while Urlacher (perhaps owing to the step he’s lost over the years) has gone from being the trail middle linebacker in Chicago’s old Tampa-2 approach to hanging over the middle near the sticks as the “Robber.”

That was fine for what the 49ers dialed up, because they only had the occasional intention of going over the middle of the field or throwing at those talented cornerbacks in man coverage. In a post on the Cover-1 Robber on his website, Chris notes that one of the biggest weaknesses with the coverage is in dealing with out-breaking routes by inside receivers. The deep corner is such a route, and with Davis and Williams lining up in the slot, it’s exactly how the 49ers were able to burn the Bears for big plays during that shocking first half. With his offensive line holding up against a fearsome Chicago pass rush, Kaepernick was able to get his best athletes matched up against the weakest parts of Chicago’s defense in man coverage, and he delivered perfect throws to finish the job.

I don’t know that the 49ers offense is about to become a dominant downfield passing attack with Kaepernick at the helm. Kaepernick finished 3-for-7 for 111 yards on throws that traveled 15 yards in the air or more; before Sunday, the 49ers had gone 16-for-31 on such throws this year, producing 464 yards. The completion percentage and yards per attempt figures on those throws are roughly similar, although the 49ers threw deep more frequently with Kaepernick (and did so against a tough defense while picking up several of the incompletions in garbage time). The big plays were there, in part, because the Bears built their scheme around daring Kaepernick (or Smith) to make those big throws. Because he succeeded, teams are going to be hesitant to push their safeties up and leave San Francisco’s slot receivers in man coverage against lesser players. That should remove some of the big-play potential, but it should create more holes for Kaepernick and the dominant San Francisco running game, which hardly needs the help.

Of course, Kaepernick can’t lead an offensive revolution for the 49ers from the bench or as part of a Pistol package for a handful of snaps per game. His brilliant performance on Monday night has led to plenty of chatter that the 49ers should stick with him over Alex Smith for the immediate future, a rumor fire that Harbaugh didn’t exactly douse after the game: “I usually tend to go with the guy who has the hot hand … we really have two guys who have a pretty hot hand, but we’ll make that decision as we go forward.” It’s Kaepernick’s job until Smith passes his concussion protocols, but from that point forward, there’s going to be a huge fight for the starting job in San Francisco. Under a less watchful eye, that sort of back-and-forth debate could end up tearing the team apart, as it did with the turn-of-the-century Bills while Wade Phillips vacillated between Doug Flutie and Rob Johnson. Harbaugh, though, deserves the benefit of the doubt. In the end, it might not matter who plays quarterback for the 49ers as long as Harbaugh’s holding a headset.