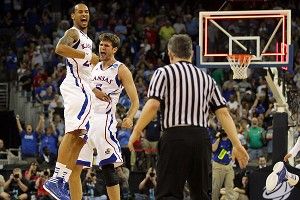 We asked Mark Titus for five predictions before NCAA tournament games during March Madness this year. Here’s what he had to say about the Final Four …

Kansas and Ohio State will be decided by a role player
I’m defining “role player” as someone who isn’t one of the four best guys for his team. So basically, someone other than Thomas Robinson, Tyshawn Taylor, Elijah Johnson, or Jeff Withey will be the difference in the game if Kansas wins. Someone other than Jared Sullinger, Deshaun Thomas, William Buford, or Aaron Craft will be the difference if Ohio State wins.

When these two teams met in December, Kansas’s Kevin Young came out of nowhere to score a season-high 14 points and play a huge role in a 78-67 Jayhawk win. I anticipate something similar happening this time around, because the top four players for each team will likely negate one another. This is why I say the outcome of the game will be determined by whomever among Young, Travis Releford, Conner Teahan, Lenzelle Smith Jr., Evan Ravenel, and Sam Thompson has an uncharacteristically great game. My money is on Releford, if only because I want to jinx Kansas as much as possible.

Someone on Louisville will mock Kentucky’s loose-butthole monocle after hitting a 3
For those who don’t know, it’s become a thing at Kentucky for players and fans to make what they refer to as “3 goggles” every time Kentucky makes a 3. Over the course of the season, this gesture has become the bane of my existence because celebrating a routine 3 is on par with a receiver doing a first-down dance after catching a three-yard pass to move the ball to his own 35-yard line. But most important, the “3 goggles” annoy me because most of the time they aren’t goggles at all. They are instead just the loose-butthole sign from Workaholics put over one eye, which is why I refer to the gesture as the loose-butthole monocle.

My hope is that at least one of Louisville’s players hates the loose-butthole monocle as much as I do, and will mock the gesture after making a 3 of his own. I’m guessing it’s going to be Kyle Kuric, because he’s one of Louisville’s best shooters and he’s a senior, so he’s had time for his hatred of Kentucky to build. And when Kuric mocks the loose-butthole monocle, hopefully it leads to …

One CBS commentator will use the word “testy” during the Kentucky-Louisville game
Just so we’re clear, I’m counting it if one of them says “testes” for whatever reason, too. But the real prediction is that things are going to get so heated between Louisville and Kentucky that the refs will have to break things up. Maybe there won’t be a full-out brawl, but I’m thinking that after Kuric throws up the loose-butthole monocle, someone on Kentucky will foul him hard the next time he drives to the basket. And while the refs are taking 20 minutes to review the play and decide whether it should be a flagrant foul, one of Louisville’s guys — who will be in a fighting mood because he listened to “What’s My Name?” before the game — will come to the defense of Kuric and get in the face of the Kentucky guy who committed the foul.

I don’t think there will be any punches thrown, but there will be some stare-downs, some finger-pointing, and at least one guy will be that doucher who wants to look tough but is too scared to join the scrum until after everything has already been broken up. (And let’s be honest, Kentucky fans — that guy will be Kyle Wiltjer.)

Kansas-Ohio State will be a higher-scoring game than Kentucky-Louisville
Those who are familiar with Louisville’s defense might not think this is all that crazy of a prediction, but those who are familiar with Kentucky’s offense might. Either way, as of right now the over/under for Kentucky-Louisville is a half-point higher than the over/under for Kansas-Ohio State. Despite this, I’m saying that KU-OSU will produce somewhere in the neighborhood of 15 more points than UK-UL, because I’m anticipating Louisville turning the game into a defensive battle. Also, Ohio State doesn’t have anybody who can guard Thomas Robinson, and I don’t think Jeff Withey can guard Jared Sullinger or Deshaun Thomas.

(My guess is that Withey will start on Sullinger and Robinson will start on Thomas. But as good of a defender as Withey has been all year, Sullinger is at his best when guarded by guys who can’t match his physicality. This is why it wouldn’t surprise me if Kansas coach Bill Self switched Robinson onto Sullinger, in which case I anticipate Thomas’s versatility causing a lot of problems for Withey.)

Louisville’s riot will be so intense that the mayor of Vancouver will send a notarized letter to the mayor of Louisville apologizing for his city’s bush-league riot.
I have unreasonably high hopes for Louisville on Saturday, and I don’t mean the basketball team. No, I’m talking about the city of Louisville and my expectations of the locals burning the city to the ground.

Now, I’m typically not a fan of any sort of unruly crowd, whether it be the Occupy Wall Street movement, the people at Finish Line when a new pair of Jordans come in, or the stampede of wildebeests that killed Mufasa. But the one exception I’m willing to make is when sports fans riot. There’s just something I find entertaining about (what I assume to be) normally well-behaved people taking sports so seriously that they transform into savages. So my fingers are crossed that the fine people of Louisville will act accordingly and celebrate the big win/mourn the tough loss by lighting stuff on fire, breaking every bit of glass they see, and randomly peeing on things.