What do you call a team that’s one point out of first with 20 games to play? A side that’s conceded six fewer goals than the second-stingiest defense in the country? A club that’s breezed through the early stages of both its domestic cup and Champions League campaigns? A squad that just soundly defeated its second-biggest rival and the defending league champs?

Read enough English-language coverage of Spanish soccer, and you’ll be able to convince yourself that the proper answer to all of those questions is a firm “in crisis.” So let’s just get this out of the way right off the bat: Unless your definition of crisis is “title-contending team that isn’t quite as good as when it was maybe the best team in the history of the sport,” Barcelona is not in crisis. Things in the north of Spain certainly are a-changing, though, so let’s take a deeper look at what all the fuss is about.

Turmoil at the Top

Last week, Barcelona fired sporting director Andoni Zubizarreta, the former Barcelona player who took over when Txiki Begiristain left four years ago, eventually to end up at Manchester City. Then, following the firing, President Josep Maria Bartomeu announced that he, too, would be stepping down at the end of the season, rather than waiting until his term’s end in 2016.1 Bartomeu himself ended up in the position because his predecessor, Sandro Rosell, was forced to resign over accusations of irregularities in his acquisition of Neymar that ultimately may or may not have included all sorts of financial shenanigans to hide the true expense of the Brazilian superstar. The club is also serving a one-year transfer ban for illegally signing underage players during Rosell’s tenure.2

The club is technically owned by more than 100,000 people, known as socis, who bought membership (but not shares) in it. The socis then elect the upper management.

Although, by appealing that decision, they delayed the start of the ban until this month, so they were able to shore up their goalkeeping situation and purchase some guy named Luis Suárez.

Obviously, all of this turnover at the top isn’t ideal, but why exactly is it happening? Well, here’s what Bartomeu had to say:

I wanted to complete the mandate until 2016, but over the last weeks the level of tension has not been right for the club. The pressure did not fit the reality. We wanted to lower the tension, which does not correspond to the reality of the situation. This is a way to remove the tension, so that we can focus on the most important — the team, players, coaches, and support them as much as possible.

The current crisis exists because Barcelona took steps to mitigate pressures emanating from the crisis. Got that?

Messi and (Whoever’s Currently) the Manager 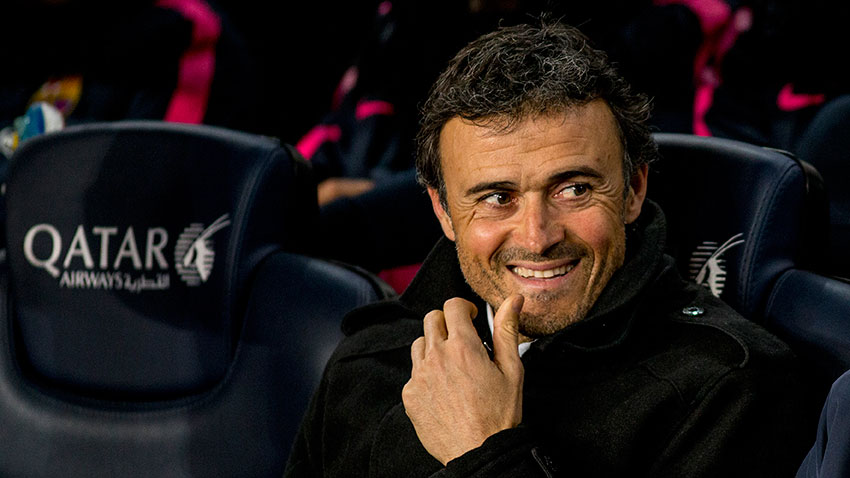 Before the clear-out at the top, there was the 1-0 loss to David Moyes’s Real Sociedad on January 4. Neither Neymar nor Lionel Messi started, but that’s not specifically the issue. The story is that manager Luis Enrique offered the two South American stars some added R&R over the holiday break, but then didn’t start them because they weren’t fully prepared from their long flight back. Messi (allegedly) lost his shit over missing 45 minutes3 and (allegedly) refused to practice the next day, which led Enrique to (allegedly) try to suspend the star until Xavi and the other Barcelona captains (allegedly) talked him out of it. During all of that, Messi … followed Chelsea on Instagram. And, since the number of teams that could actually afford Messi is vanishingly small, we now have the obligatory, tenuous at best Manchester United link.

He came on at halftime.

This, however, is barely anything new. Messi has a long history of fighting with coaches. Whether it’s Pep Guardiola, Gerardo Martino, or Argentina’s manager at the 2014 World Cup, Alejandro Sabella, Messi is always rumored to be butting heads with his coaches. It’s almost like he’s one of the best players in history and that makes him a hyper-scrutinized managerial challenge. In the past, though, Messi was just a kid who wanted to play so much that he pouted when he wasn’t on the field. Now, his playing-time-related discontent manifests itself as wanting his manager fired.

Here, let’s remember that Barcelona is also a soccer team, which plays actual games. The inescapable truth is that the side, while still excellent, is no longer the idealistic purveyor of tiki-taka style it once was. That can be chalked up to a number of things — the departure of Guardiola, the tragic death of Tito Vilanova, the aging of stalwarts like Xavi and Dani Alves — but more simply, playing and then maintaining a demanding possession-based style is just really hard to do. Even when Pep went to Bayern Munich — despite having access to seemingly every other talented central midfielder who has ever existed — that team didn’t really take off until he recruited Xabi Alonso this past summer.

At a club where ideology and sports are so intertwined — and after a four-year stretch under Guardiola that was as near-flawless a manifestation of that as possible — the transition was always going to be messy. Last year, Martino cautiously moved away from the old way, occasionally ceding possession to opponents and playing a slightly more reactive style. He lasted a year and was then replaced by Enrique, a company man who’d played for Barcelona from 1996 to 2004 and then managed Barcelona B from 2008 through 2011. Despite those Blaugrana bona fides, Enrique has moved even more aggressively away from the Barça Blueprint than his ousted predecessor.

Enrique, it seems, has committed the great sin of modifying Barcelona’s tactics to get the best out of his players. With perhaps the most dynamic attacking front three in the world, Barcelona is changing. Messi, Luis Suárez, and Neymar are being asked to combine more quickly in attack, while the midfield is increasingly reserved behind them. Almost halfway through the season, they’ve conceded a grand total of nine goals in 18 games.4 Despite shoring up the defense with a slightly more disjointed approach and despite missing both Neymar and Suárez for extended time at the beginning of the season, they’ve scored more goals than any Spanish club not named Real Madrid. This team is playing well, and more important, it’s moving forward.

And two of those were Jordi Alba own goals.

Yet it literally took one bad result for the walls to come crashing down on Luis Enrique. Just a single loss to a manager who specializes in hard-fought defending and 45 minutes of Messi on the bench launched enough pressure to force the firing of a sporting director and the resignation of a president in order to “lessen the tension.”

If you zoom out just a bit, though, Barcelona is the same as it ever was. The team is contending. Messi and his coach have a bumpy and petulant relationship. And new star players have been acquired; it’s easy to forget, but the club bought Neymar and Suárez in consecutive summers. The only difference is that it’s now playing a modified brand of soccer. If that’s enough to cause a meltdown — well, this crisis started long before the beginning of January.

This post has been updated to correct the location of Barcelona. It is in the north of Spain, not the south.