Sometimes saying good-bye is hard. Sometimes, like last night, it’s easy. Like, too easy. So easy that you want to do it again and again and again. And you do. You say it in the mirror, you mutter it under your breath, you broadcast it to the world with hashtags and jokes. You say it to everyone except those who were meant to hear it. But eventually, they hear it, too. And it comes out, and it’s easy, just like you practiced. You say good-bye before you’re supposed to, but it feels right. The disavowal is cathartic, the sense of closure replenishing.

Last night, Sixers fans bid preemptive adieus to Thaddeus Young, Evan Turner, and Spencer Hawes, the three most tenured players on the roster. By Thursday, there is a chance none of them will remain in Philly. Together, for possibly the last time, the three survivors of the old guard did as the Sixers have often done this year, laying down a combined 28 points on 10-of-36 shooting in a blowout loss to the Cleveland Cavaliers. The crowd showered them (but mostly Turner) with boos — the most proper of send-offs.

Before the game, Philly radio host Spike Eskin launched #FarewellEvan, a hashtag for fans to send their parting words to the former no. 2 overall pick, to share their most treasured memories of a player who hadn’t actually been traded. It wasn’t sincere, but it was sincerely Philadelphian. 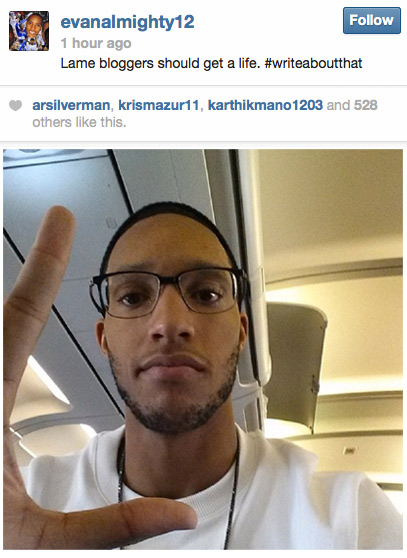 Even the refs got in on the action last night, creating a #FarewellEvan moment in real time. Early in the second quarter, Turner drilled a 3 at the top of the circle, very clearly behind the line. However, the refs knew the personnel they were officiating, and so the shot was credited as a 2-point basket, because everyone knows of Turner’s tenuous relationship with the 3-point shot. It remained on the scoreboard as a 2 for quite a while before the refs were urged to watch the replay.

Waiting for these trades to come is tough for Sixers fans and general NBA fans alike. There is a place for all three players on competitive teams. For seven years, Young has matured and found his niche as a versatile inside-out player on offense, and one of the most solid pick-and-roll defenders in the league — but never in a context outside of Philly’s constant state of flux. He’d fit right in as an instant upgrade with teams fighting for various levels of legitimacy (Warriors, Spurs). Turner, while a player with a much more particular set of skills, could absolutely help a team that can use a scoring lift or a secondary ball handler (Bucks, Bobcats). And for Hawes, he doesn’t have to look much further than last season’s trade deadline to see how he might be able to affect a team. Josh McRoberts’s success as a Bobcat proves that most squads could use an average but multifaceted big man on their roster. If McRoberts could help a franchise so much that the greatest player of all time calls him the reason for the Bobcats’ success, imagine what Hawes might be able to do.

Sixers fans have been counting down the seconds to the trade deadline, but the relative silence from the rumor mill has left room for doubt to trickle in. There remains the very real possibility that Thursday comes and goes, and Sixers fans are put in a network sitcom with the same three dudes they’ve lived with and endured for the last handful of seasons.

But their physical departure is a formality — obviously their presence hasn’t much hurt the bottom line. With or without three of their best players, the Sixers are still capable of tremendous tanking. The good-byes doled out by fans last night were a purge of the emotional investments made. Whether the players stay or not, come Thursday night, they’ll become specters of a past era. The only question is whether they’ll linger in corporeal form, or vanish from sight.

In Philadelphia, garbage time is like looking into a crystal ball and picking up a visual of what the immediate future holds. With a minute left in the game, Lavoy Allen, double-teamed in the paint, threw a no-look, behind-the-head pass that split two defenders and landed right into the hands of Arnett Moultrie. It’s honestly even better than it sounds. The basket cut the lead to 29, which meant Philly narrowly escaped what would’ve been the third loss by 30-plus points in its last four games. Small victories.