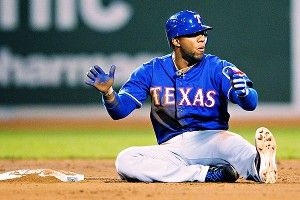 I’m in a mixed keeper league and I’ve managed to procure:

I’ve been giving Andrus most of the starts in hopes that he will snap out of his funk, get on base, and get driven in, but he’s been pretty horrible in the R and SB columns.

It might seem like a slow start for Andrus. Through 17 games, he’s now hitting .246/.324/.354. But for fantasy purposes, he’s on pace to hit 10 homers, score 76 runs, drive in 67, and steal 10 bases. These would be career highs in the power categories and not far off career norms for runs scored, with that ugly batting average and big drop in steals the major problems. But really the question you should be asking is, what’s changed? There are four legitimate reasons to ditch a non-fringe player.

1. His role changed. This especially applies to closers. Jim Johnson isn’t an inherently valuable fantasy commodity. He doesn’t strike out many batters and he won’t give you enough innings for his decent-but-not great ratios to help your team much. But he happens to be the closer for the Baltimore Orioles, for now. The minute he hits the disabled list, gets traded to a team who wants to use him in the seventh, or gets nudged aside as the O’s make hard-throwing Pedro Strop the closer, Jim Johnson won’t be rosterable in standard fantasy leagues — or virtually any fantasy league.

2. He gets injured. Self-explanatory. If you’re in a non-keeper league and your player suffers a season-ending injury, you drop him, even if it’s Matt Kemp. (Kemp better not get hurt now, or an angry mob of pitchfork wielders will find me and kill me. Deservedly so.)

3. His skill set fundamentally changes. This comes up most frequently among pitchers, and aging players. A seemingly healthy and able pitcher might lose velocity or experience other problems that hint at major problems. Meanwhile, a thirtysomething slugger might see his bat speed slow down to the point that he suddenly becomes a shadow of his former self. Dale Murphy, Mo Vaughn … many once-great players have fallen off a cliff, suddenly and sadly. A healthy position player in his 20s is a long shot to see a major change in his underlying skills, though.

4. A great player’s available on waivers. Here’s where it starts to get a little tricky. What constitutes a great player? If Chris Getz starts the season hitting .400 with a few steals, does that make him a great player, or is he just riding a hot streak? Deciding that a waiver-wire player truly has the skills and opportunity to sustain his hot start takes equal parts analysis and intuition.

So what’s the answer with Andrus? He was a fifth-round pick in many standard 12-team mixed leagues, even a late fourth-rounder in a few. In his first three full big league seasons, he’s scored 72, 88, and 96 runs and stolen 33, 32, and 37 bases. He’s just 23 years old. Is the most likely explanation that he’s suddenly a different player? Or is a steep drop in batting average on balls in play — a stat heavily influenced by luck and opposite defense and subject to big swings in small samples — the biggest reason for Andrus’s lower batting average? Is he running less because he’s not a base stealer anymore, or is the combination of a slightly lower on-base percentage and he and his manager not wanting to risk outs with Josh Hamilton hitting the bejeezus out of the ball right behind him in the lineup prompting a less aggressive approach early on?

It’s theoretically possible that Hamilton maintains something close to a .408 average all year. It’s also possible that the hip flexor injury that slowed down Andrus in spring training is still bothering him three weeks later. But we have no good reason to believe either of those scenarios are true.

Andrus continues to bat second in the potent Rangers lineup. He’s even walking more than ever before, with a 10.5 percent walk rate (career 8.6 percent). You invested a much higher pick in Andrus than you did in Ian Desmond or Rafael Furcal for a reason. Desmond cooled off after a hot start. Furcal’s raking at a .362/.413/.507 clip, but you’ll have a hard time convincing anyone in your league that a 34-year-old, injury-prone shortstop is suddenly going to hit like an MVP candidate, even if those skeptics don’t notice Furcal’s .420 BABIP. Unless Andrus’s value is so sky-high in your keeper league that you can get a win-now superstar for him, the easiest move is also the most logical: Keep starting him, because the drop-off to Desmond or Furcal over the course of a whole season will be too steep. If you can at least sell a little higher than normal on Furcal, even if it’s just for a speculative young pitcher, that’s probably the way to go.

I know, I know — it’s only April, a slow start means nothing … but in all seriousness, is Justin Upton REALLY everything he’s cracked up to be?

I’d be a little worried, because one of the four fantasy game-changers is in play: Upton’s been hurt. He sprained his left thumb April 8. Tried to play through it. Struggled badly. Saw a hand specialist. Missed three games. There were rumors of a disabled-list stint. He struggled some more. Finally, on Monday night against the Phillies, Upton notched his first RBI of the season … actually his first regular-season RBI since September 21 of last year. He also, finally, whacked his first home run of the season. It wasn’t just any homer either. It was a rocket, launched deep into the seats in left-center at Chase Field.

Is this the start of a vintage Upton run, one that’s going to end with 30 homers and 100 RBIs as everyone expected? Well, maybe. But Diamondbacks beat writer Nick Piecoro notes that Upton isn’t over his thumb injury by any means. Per Arizona manager Kirk Gibson, he’s simply learning ways to swing the bat relatively pain-free, to try and regain his power stroke without having to wince in agony every time. Which all sounds fine, but it’s not the same as Upton being 100 percent healthy.

So really the answer to the question here is, see what the rest of your league thinks. If a rival owner is willing to buy Upton at or near full draft-day value (he was a late first-round or early second-round pick in standard mixed leagues, near the likes of Adrian Gonzalez, Ian Kinsler, and Evan Longoria), you should take that deal given Upton’s questionable health. Hope that Upton hits a couple more bombs this week, then strike right when the interest for him heats up. If no one’s willing to offer anything close to draft-day value, you have to sit and hold. Even a potentially diminished Upton offers more upside than second-tier aces like Zack Greinke or valuable but much more injury-prone late-third-round types like Dan Haren or overdrafted young bucks like Desmond Jennings.

Oh, and if you’re thinking about trying to buy low, the inverse strategy is in play: Offer a third-round talent off to a hot start, and hope you bank a profit by year’s end. If the other guy’s hesitant, remind him that John McDonald hit a home run before Upton did.

I’m in a 10-team mixed roto league. We have three DL spots, and mine are currently occupied by Chris Young (after such an amazing start!), Tim Stauffer and Scott Baker. Now that Baker is out for the season, who else currently on the DL is worth swapping him out for? Bailey, Storen, and Madson are being stashed by their owners, as are Hudson, Fister, and Carpenter. The top available starters are Karstens, Burnett, and Joba. Are any of them stash-worthy? Is Stauffer stash-worthy?

Side note: I know the season is (very) young, but Ervin Santana just looks … terrible. He got shelled by the Oakland A’s tonight. Having a bad night against the Yankees is understandable, but getting beat up by the Royals and A’s can’t be a good sign, right? Is it too early to give up on him? With the likes of Ted Lilly, John Danks, Mark Buehrle, Trevor Cahill, and Aroldis Chapman on the wire?

Sorry for the double question. Advice on either would be amazing.

Tough one on the DL front. Looks like even in your shallow format, your competitors are being very aggressive about stuffing their DL spots — rightfully so since it costs nothing to do so.

But the more germane point is this: While stashing Doug Fister in a DL spot won’t hurt much, if at all, he’s not someone you’d want to keep for the rest of the year once he’s healthy. In a 10-team mixed league, you want to stream pitchers as aggressively as possible, with only a handful of Roy Halladay/Justin Verlander types good enough to take up roster space all season. If you want a good primer on who’s worth keeping and who’s merely streamable, check out Matthew Berry’s column on The Wandy Line. Berry sees only 32 pitchers being worthy of rostering all year long. You might prefer a little less roster-juggling and expand that number a bit. But the general idea of knowing where your league’s replacement level lies is an important one to grasp.

There’s just no way Ervin Santana — even peak Ervin Santana — belongs in the don’t-drop group. Neither do Lilly, Danks, Buehrle, or Cahill. On raw ability, there’s a chance Aroldis Chapman could one day ascend to that group. But as long as Dusty Baker pisses away Chapman’s value by giving him 80 non-closing innings a year instead of 180 in the rotation, Chapman’s not there either. Study weekly schedules and study them hard. Look for pitchers slated to make two starts. Double down if one of those starts is at Petco Park, or against the pathetic Pirates offense. The names don’t have to matter all that much. There are scenarios where you could and should start Chris Capuano and Bruce Chen, even in a 10-team mixed league. Stream, stream, and stream some more. If you’ve got a pitcher you see as merely streamable but someone else sees as a must-have keeper — 2012 fast starters like Kyle Lohse, Lance Lynn, and Matt Harrison, solid-reputation guys like Ervin Santana, or peripherals-don’t-nearly-match-up-to-ERA guys like Johnny Cueto — trade him for an offensive upgrade. Right now, if possible.

Questions for a future mailbag? Email us at grantlandfantasy@gmail.com.