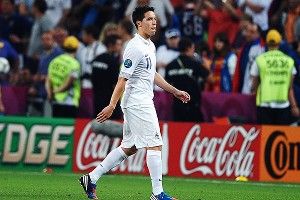 Former France national team manager Raymond Domenech believes in things that you and I do not. Using astrology to help pick his team, for one. But here’s one thing Domenech believes that seems to be right on: Karim Benzema, Hatem Ben Arfa, and Samir Nasri are not good enough for France. When Domenech was manager of the France national team, he resisted cries to include these young players, who were the core of France’s under-17 European Championship squad in 2004. And when the French players revolted and refused to practice at the last World Cup, it seemed a blessing in disguise that they were not there. Heading into Euro 2012, the feeling was that under new manager Laurent Blanc, Nasri, Ben Arfa, and Benzema were finally going to get a chance to strut their stuff. When the tournament ended for France with consecutive 2-0 defeats to Spain and Sweden, and a solitary goal between the trio of Benzema, Ben Arfa, and Nasri, the knives were out after yet another debacle, and it is now hard to escape the feeling that French football is in a state of terminal decline and the current crop of players won’t be the ones to stop it.

But don’t take my word for it. Here’s what ex-France captain Jean-Michel Larqué had to say: “The levels of intellect and talent in that team are catastrophic. Les Bleus are rubbish and stupid.” Here, too, is Domenech sounding like a man who is finally vindicated: “It’s impossible to do anything with these players. They’re too individualistic. Benzema was guilty in this respect again.” When pushed to name his best player for France in the tournament, Domenech replied “Lloris,” the keeper.

While France continues to churn out players for Europe’s top leagues, the window of success at the national level is getting smaller for the current group. It’s too early to put the nail in the coffin, because many of them are now entering their primes and play for some of Europe’s top clubs. In this sense, Domenech and Larqué are only half right; you can do a lot with French players. You can win the Premier League with them, you can win La Liga with them, and you can win the Champions League with them as Manchester City, Real Madrid, and Chelsea proved this season. The real question now is one that England has been trying to answer for the last 20 years. Can you mold a team of French players into a cohesive unit good enough to mirror their performance when they play for their club sides?

When you ask this, more questions arise. Namely, does France expect too much from its current crop of players? When Les Bleus won the Euros in 1984, they had Michel Platini in the side. He won the Ballon d’Or three consecutive years. When they won the World Cup in 1998 and the Euros in 2000, they had Zinedine Zidane, the best player of his generation. There is no one close to their level in the current French side. An exit in the quarterfinals against a Spain team on a historic run is nothing to be ashamed of and, in fact, prior to the tournament, Laurent Blanc said that a quarterfinal finish would be good enough. The feeling was that perhaps the tournament came a few years too early for a team with such a young core.

But even with the objective of reaching the quarterfinals achieved, it still feels like failure. The issue is not that they lost, but how they lost. When I caught the replay of France’s loss to Spain, the first thing that jumped out at me was France fielding two fullbacks on the right side. The message was clear: This was more about damage limitation than trying to win. Never mind that Spain had never defeated France in a tournament before. The formation communicated, in no uncertain terms, that France was afraid of Spain. On Thursday, I flew to New York for a friend’s wedding. I picked up a copy of L’Equipe, France’s largest sports journal, at the gate. The headline “Nasri doit-il sortir,” made two things clear. First, France needed to drop one of their creative players. And that player should be Samir Nasri.

With Nicolas Anelka gone, Nasri has inherited the mantle of France’s enfant terrible. After scoring France’s first goal of the tournament, Nasri told the press to “ferme ta gueule” (shut up) and from there it only got worse. After France was eliminated Saturday in a 2-0 defeat to Spain, Nasri reportedly had this exchange with a journalist:

Nasri: You’re always writing shit stories about us.
Reporter: Well get lost then.
Nasri: You tell me to get lost? Come and we’ll sort it out over there.
Reporter: That’s it …
Nasri: Fuck you, go fuck your mother, you son of a bitch. Fuck you, that way you can say I’m rude.

Reading that exchange, I’m tempted to think that Nasri crumbled under the weight of expectation. He will never be Zidane. He knows it. He knows that we know it but more importantly he also knows that he is expected to be as good. Is it possible that an entire generation of French players will be crushed under the weight of the recent past? That is the trouble with success: Sometimes it is more of an albatross than an enabler. The players know anything short of repeating the exploits of those who came before them will not be enough. It is the same fate that met one Argentine player after another as Argentina searched for the next Maradona. Javier Saviola and D’Alessandro will never be able to go down simply as tricky short players who got the most out of their talent because too early in their careers they were christened the next Maradona. They paid the price for not living up to our expectations.

But the problem with expectations, upside, and potential is that they are merely inexact buzzwords that communicate desires and not reality. What those words really mean is that a player isn’t good yet, but we expect him to be. And when our desires aren’t met we blame the players for not living up to what we thought they would be. But even if it’s true that Nasri will never be Zidane, he also fails to scale even the lowest bar set for professionalism, and Benzema’s disappearing act shouldn’t be excused simply because he’s young. The only clear takeaway from France’s performance in the tournament is that they are in a free fall and there is no one out there who seems ready or capable to stop it.

When I arrived at the wedding in New York on Saturday, it was a heavily European crowd and interest in the Euros was perhaps the one thing we all had in common. When the father of the bride, an affable Frenchman who always has laughs to spare, learned France had lost to Spain, he let out an audible “putain,” but didn’t let it ruin his mood. Instead, he fired a shot at the groom, who was Portuguese. “I will never have to worry about Portugal winning a trophy,” he said. Even at a wedding, misery loves company. It was a sign, too, of just how far France had fallen. Perhaps, like the father of the bride, the only pleasure France will have in the future is Schadenfreude, not the joy of basking in their own success.