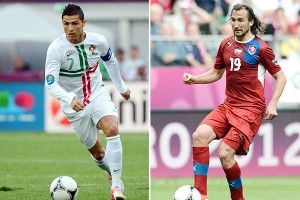 How They Got Here: Portugal pulled off the unlikely feat — or what seemed an unlikely feat before the tournament — of making it out of Group B, the Group of Death. After a fairly close loss to Germany, 1-0, Paulo Bento’s side got a game-winning goal against Denmark from little-known Silvestre Varela and a world-beating performance from Cristiano Ronaldo in a 2-1 win against the Dutch.

The Czechs got their pants pulled down by Russia in one of the most one-sided losses of the tournament so far (4-1, on the opening day of Euro 2012). Since then, they’ve taken their chances very well (basically the key to winning tournament games). Their opening goal against Greece was like watching CCTV footage of a mugging.


This should be a fun one, with both teams playing better and better as the match days have gone by.

What to Watch For: Keep your peepers peeled to top and bottom of your screens, because the action is going to be on the wings. On the right, the Czechs run a lethal combo of fullback Theodor Selassie and midfielder Petr Jiráček (who is on fire right now, scoring against Greece and Poland). On the opposite flank there’s Ronaldo, who, while we were all spending our free time LOL’ing at his miss against Denmark and wondering if he would ever truly come through on a big stage, messed around and delivered huge against the Dutch with two goals and the kind of footballing Silver Surfer performance we all secretly want to see from him (even if we hate him).
Prediction: Portugal.

How They Got Here: Greece, despite all their history (the last couple of tournaments, not the battle of Sparta and Athens), have been pretty entertaining throughout Euro 2012. Or at least they’ve been involved in entertaining matches. They are an example of what happens if you just keep playing (Russia might want to write this down). After drawing with Poland and losing to the Czech Republic, they looked down. But in their third and final match, a goal from 35-year-old captain Giorgos Karagounis put them up on Russia, and saw the Greeks through to the quarters.

Germany has been the most consistently impressive team in the tournament, treating their Group of Death competition like it was the Group of Whatevs and advancing, high on confidence. They look like world-beaters all over the pitch. Even their onetime shaky center of defense looks great with Mats Hummels and Holger Badstuber locking it down.

What to Watch For: Greece showing more patience than any of the more attack-minded opponents Germany has faced thus far. Denmark, Holland, and Portugal all, to varying degrees, attacked Germany at some point (OK, Portugal not so much). Greece has no social plans. They have nowhere to be. They can wait all day. Germany’s nifty midfield of Sami Khedira, Bastian Schweinsteiger, and Mesut Ozil can stroke it around the center of the park as much as they like. The Greeks brought their books, so they’ll just sit there and wait, thanks very much. The key here is going to be the continued hot streak of German striker Mario Gomez. The quicker Germany can get him the ball, the less settled Greece will be, and the better a chance Germany will have to get something in the back of the net and make this interesting.
Prediction: Germany.

How They Got Here: Spain made it through their group like someone cleaning his house on Ambien. It got done, but nobody is going to remember anything about it. Fernando Torres broke his scoring drought against Ireland, but looked to be regressing to the face-palming mean against a tougher Croatia. They are still Spain, they still move the ball like a bunch of tapas-crushing wizards, and they are still probably the favorites to win the whole thing … BUT!

Hey, you have to go out on a limb at some point, and I have the strangest Spidey sense that France is going to snatch this one right from under the defending champions’ noses. For brief little flashes — Samir Nasri and Franck Ribery (who looked good against Ukraine) crashing in from the wings, Yohan Cabaye bossing in the midfield and making runs toward the goal, or Jeremy Menez and Karim Benzema preying upon sleepy defenders up front — they have looked great. And here’s the thing about those guys: They’re a bunch of pricks.

And what do we know about pricks? You can’t predict their behavior and they often surprise you. This French team really seems like the kind of team that plays down to lesser talent and raises its game to a superior one. They aren’t going to find a more superior batch of talent than Spain. (H/T to 101GreatGoals for pointing out that video.)

What to Watch For: Will my Kickstarter to get Fernando Llorente off the bench for Spain be successful? Probably not, but a boy can dream. Until now, Spain manager Vicente del Bosque has utilized Cesc Fabregas as a “False 9” (where a midfield-style player starts up top but drops deep and facilitates as other players break past him, in this case David Silva and Andres Iniesta) or Torres on his own, up front. He hasn’t played his wild card: Llorente. The Athletic Bilbao striker is an absolute beast — they call him the Lion King, for Pete’s sake. Here’s a video of him scoring goals, scored by my favorite song off The Lion King soundtrack, Run-DMC’s “It’s Tricky.”

If things aren’t clicking for Spain later on, if the score is tied or Spain is down, it would be great to see Llorente let out of his rusty cage on the bench.
Prediction: France. (I SAID IT.)

How They Got Here: A tale of two managers. Despite winning plaudits for their atypically attacking style, the new, beautiful Italy still only won one game (against Ireland, which, just as it wasn’t an accurate depiction of Fernando Torres’s striking talents, wasn’t a great barometer for Italy’s quality). Cesare Prandelli, with his occasional 3-5-2 formation (wingbacks!) and 13-mile hikes (eccentricity) is the Slaven Bilic (Croatia manager with whom everyone was in love back in Euro 2008) of this tournament — the breakout managerial star. And in a way, simply changing the way Italy plays seems to have been a huge achievement for the former Fiorentina boss.

His opposite, Roy Hodgson, is no slouch either, and tournament football seems to suit his steady hand. We forget, because of the sadly iconic images of him rubbing his face like a nocturnal animal on the touchline at Liverpool …

… that this guy is actually the same cool customer who led Fulham to the 2010 UEFA Cup Final, a cup run that included a 4-1 victory over Juventus (one of the most unexpected and joyous games I’ve ever seen).

Deuce! During Euro 2012 Hodgson has been at his best, keeping his team calm and organized, even when they haven’t been playing their best. That’s the thing; you won’t have your best game every game, but if you hang around the law firm of Crazy, Stupid and Lucky can show up and win your case for you.

Another note: Hodgson is especially adept at substitutions (see: Theo Walcott against Sweden). Furthermore, his decision to turn over the keys to Steven Gerrard and make the Liverpool midfielder England’s chief creative player has been just that — decisive. It’s the kind of call an England manager has needed to make for almost a decade.

What to Watch For: That Giorgio Chiellini–shaped hole in the center of the Italy defense. The Juventus defender is quick, carved out of Italian marble, and good with the ball at his feet. He will be missed. The question then becomes, How does Hodgson exploit Italy’s weakness? Speed (Danny Welbeck) or strength (Andy Carroll, who played his best game in an England shirt against Sweden).

Also, mind your temper, boys. Italy has a habit of getting under their opponents’ skin (Ireland’s Keith Andrews felt like he was provoked into his matching pair of yellow cards during his nation’s clash with the Italians) and England’s Lil’ Wayne Rooney, while a much cooler customer than he was during “Stompgate” back in the 2006 World Cup, still can have a hot head. Even more so now that he has all that hair up there. Let it breathe, Wazza!