In Statesboro, Georgia, nestled in pine and cotton country, about an hour inland from Savannah, there’s a football team you should get to know. The decision, at this point, is not really up to you. It has been imposed upon you, by a just-arrived FBS team that could end up atop the Sun Belt in its first year of league play. World, meet Georgia Southern. They like red pepper jelly, birds of prey, and long walks down the field.

Last year’s Eagles were That Team That Beat Florida, dealing the Gators their first-ever loss to an FCS program, sealing Florida’s first losing season in decades, and doing it in the Swamp. That game capped a season in which the Eagles went 4-4 in SoCon play, and they headed into the 2014 season with a new head coach. They’d be playing full-time FBS football for the first time, in bigger stadiums, against teams with more scholarships. And what do you reckon happened next?

Funny story: The Eagles lost their season opener, at North Carolina State, by a point. They won their next game, against designated FCS doormat Savannah State, by 74 points. They lost their third game, at Georgia Tech, by four. And they haven’t lost since, recording seven consecutive Sun Belt wins by a combined margin of 284-138. A handful of plays separate Georgia Southern from a perfect record in its first season of FBS ball. A 10-win campaign is not out of the question. And GSU is not done turning opponents into punch lines. Can’t you just picture the campfire stories? They got Florida … you all saw it … and now they’re gonna get YOU! 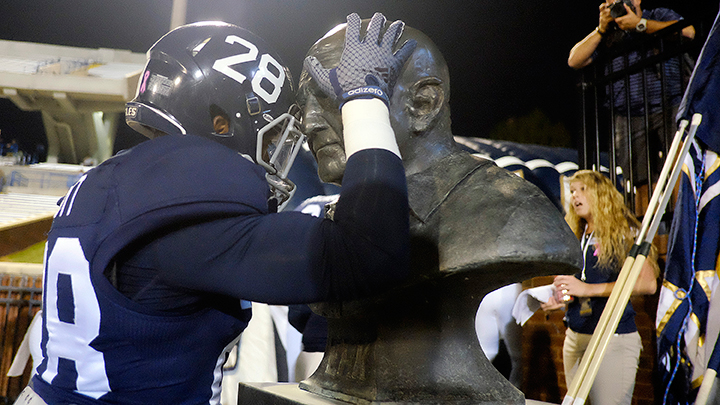 Georgia Southern is new to us, but not to the game; these are no Jaguars in the monkey lab. The team played its first game in 1924, has had a continuously operational program since 1981, and arrives at the sport’s upper echelon bearing plenty of accolades. Erk Russell won three national titles in Statesboro; Paul Johnson took his first head coaching gig there and won two more.

To visit Statesboro is to join a story already in progress. It is a program that comes pre-steeped in its own folklore and rituals. At one end of the stadium, there’s a shorter, sideways field set up right next to the end zone, that fills during games with dozens of small children playing touch football. Braswell’s, a local specialty food company, provides a plush anthropomorphic jar of red pepper jelly that participates in the kind of condiment races you’d typically find in a baseball stadium. But the real mascot attraction is Freedom.

Georgia Southern is home to the Lamar Q. Ball Jr. Raptor Center, which includes among its residents a bald eagle named Freedom.1 Freedom is brought out before every home game to take a majestic loop around the stadium, and the night we were there he finished his turn with a gasp-inducing dive his handler says was the first he’d ever seen him take.

We did just yell at Nebraska and Wisconsin for naming their new rivalry trophy this, but what else are you supposed to name a bald eagle? 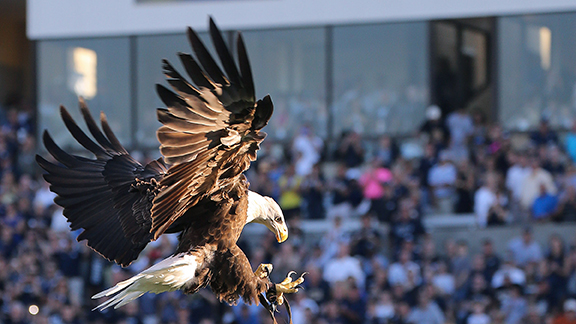 At the head of the operation is first-year head coach Willie Fritz, a coach’s son and a lifelong creature of football. Fritz, who’s served as a head coach at juco Blinn and D-II’s Central Missouri, was plucked from Sam Houston State following two FCS national title game appearances in four seasons, and found himself on a kind of Candyland shortcut into college football’s uppermost division when he arrived in Statesboro: The Eagles were nearing the end of their transition into the FBS, and new facilities were under construction.2 The athletic department had to install floor-to-ceiling sunshades on Fritz’s new office windows, the ones that provide a panoramic view of the stadium, so numerous were the students and fans wandering by and banging on them to tell him how much they liked the new building.

One staffer confided of the old field house, “The whole building smells like formaldehyde, and there’s never been any formaldehyde in there.”

So here comes Fritz to head up an FBS program, still populated with a bunch of FCS players, and the first thing he’s got to do is tweak the Eagles’ triple-option offense.3

Nicole Auerbach has a great breakdown here of how exactly Fritz’s staff went about doing that.

“Sometimes,” Fritz told Grantland, “particularly in a program where you’ve had this kind of success, you worry about change.” Of particular concern to Fritz was the offensive line, laden with upperclassmen, who’d have to transition from the man blocking they’d spent their careers executing, to zone techniques. “Everything we do starts with zone play,” said Fritz, “but after about three or four days of spring practice, it looked like they’d been doing it a long time.” Fritz credits the teaching abilities of the offensive line coach, Alex Atkins. He recalls being on the field before the Eagles’ season opener at North Carolina State and suspecting that he had something special: “I looked out there on the field, and particularly our offensive line — they looked the part, you know?” 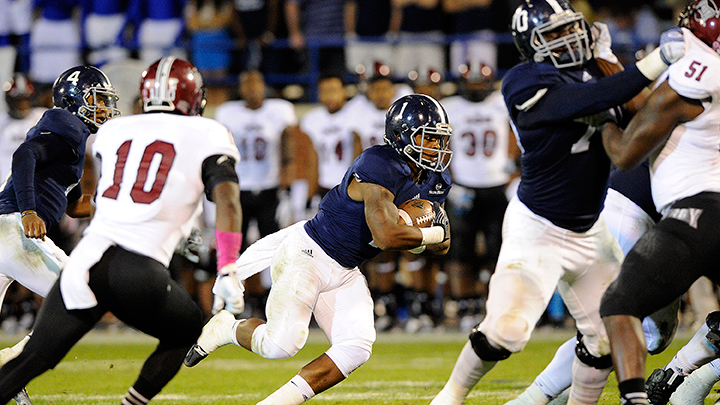 They looked the part and they played the part: The Eagles were paid $750,000 for their trip to Raleigh, where they held a six-point lead over the Wolfpack with under two minutes to play. Two weeks later they traveled to Georgia Tech, where they were paid $700,000 for their appearance and held a three-point lead over the Yellow Jackets with under 30 seconds to play. Heading into their Sun Belt schedule, Fritz reminded the team: “Hey, you were 4-4 in conference last year. But you beat Florida? We’re going to have to have that effort every single week.”

The defense, which retained plenty of experience from the 2013 unit, along with coordinator Jack Curtis, is allowing just over 21 points. The offense, averaging close to 43 points per game, has adjusted readily to Fritz’s tinkering. “A lot of us used to run the zone option and the spread in high school, so it wasn’t hard,” said running back Matt Breida. “Obviously, if you watched us last year, we barely passed at all.”

The Eagles currently attempt a whopping average of 12 passes per game,4 against 53.5 rushes, but for quarterback Kevin Ellison, recruited by Fritz predecessor Jeff Monken to run the triple-option scheme that he ran in high school, that still translated to extra homework: “We didn’t throw it much, so our mechanics were kinda sloppy.” Georgia Southern, as of this writing, has yet to lose a Sun Belt game. 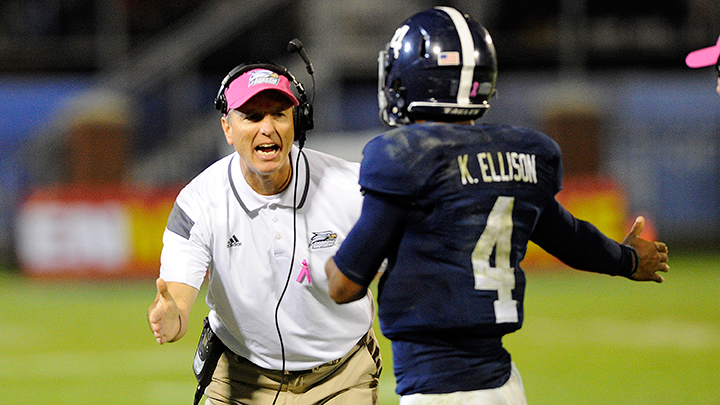 Part of why this is working has to do with the makeup of the Sun Belt itself, and some seriously fortuitous scheduling: The conference has lost five programs over the past two seasons to realignment, and has been acting as a kind of unofficial onboarding league for programs making the jump from FCS. It boasts no world-beaters this season.5

Not that any league does this year, even in the Power 5.

Additionally, the Eagles this year miss both current SBC powers Louisiana and Arkansas State on the regular-season schedule. This probably seemed quite fair, given the new coach and the transitional status of GSU, in the preseason. Now we really want to see those games played.

You won’t find a player or coach who won’t publicly profess to going into every game expecting to win, but the Eagles’ rise took some of their own players by surprise. “I’m not gonna lie,” says Breida, “I didn’t pay attention to it at first. When you’re winning, it goes by quick. Then we looked back and went, ‘Hey, we’re on kind of a streak here.” Georgia Southern is all but guaranteed a nine-win season, the way finale opponent Louisiana-Monroe has been operating, and they could get to 10 if they can get past Navy. The Eagles will get $500,000 out of this weekend’s trip to Annapolis, where they will face that rare opponent equally dedicated to the ground game.

There is even, however remote, the technical possibility of a bowl bid. Who could’ve guessed? But would you have thought, going in, that an FCS team would knock off Florida on the road last year and threaten to string together a perfect conference record this year as a first-year FBS program? It’s too perfect. Too perfect like a stadium full of students singing “Don’t Stop Believin’” and an eagle named Freedom, but here we are.