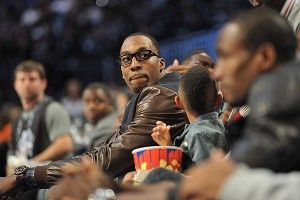 The most miraculous thing about this entire will-he-won’t-he Dwight Howard ordeal is that it has somehow made LeBron James and his decision to make his decision with The Decision look like a good decision! At least he made a decision, right? Howard has been holding the Magic, and in a way the rest of the NBA, hostage as he bobs and weaves around questions about his basketball future. On Tuesday night, following a colossal, 24-point, 25-rebound performance in a 104-98 Magic victory over the Heat, Howard again commented on the possibility of being traded: “We’ve been talking, like I said, for a while. I told them [Magic front office] I want to finish this season out and give our team, give our fans some hope for the future. But I feel they have to roll the dice.”

Of course, Howard’s latest statement has done nothing to quell the rumors that he will, in fact, be dealt by the trade deadline and that being dealt is exactly what he’s agitating for. Or not. Nobody can really tell what Dwight Howard wants, other than to make Otis Smith and Magic president Alex Martins feel like escapees from an insane asylum. He exists in a state of Indecision. Jim Gray should ask him about it …

Thank you very much. Everybody is on pins and needles across the country, particularly those teams who are in the running for Dwight Howard.

Are you ready to go, Dwight? Where is the Superman outfit?

It’s at the dry cleaner’s. I got grape jelly on the cape.

What have you thought about this process?

I have thought lots of things actually, but the most important thing is that whatever I thought, whatever I think, I share it. It’s important to me that I make things as confusing and aggravating as possible for the Orlando fan base.

You weren’t able to be recruited because you went straight to the NBA from high school. Have you enjoyed this recruiting process now?

Oh, it’s been awesome. But don’t underestimate my ability to upset the collegiate athletics apple cart. Sometimes I will just call random college basketball coaches and let them know I’m available, too. Just the other day I called Eddie Sutton at 5 in the morning.

How many people know your indecision right now?

One hand or two hands?

Let’s go with a baker’s dozen. That’s my favorite number.

When did you not decide?

I didn’t decide this morning. I got up, called Chip Kelly and told him I was on the verge of becoming a Duck, quacked really loudly, hung up, then made a peanut butter and jelly sandwich. Then I got jelly on my cape. Had to go put on my other cape. Then I checked my voice mail and Stan Van left me a message that was just the sound of his facial hair growing. Then the day just got away from me.

So the last time you changed your mind was yesterday? Today?

There is no spoon.

So does the team that you’re going to, that you’ll announce in a few minutes, do they know your indecision? Are they aware you still don’t know what you want to do?

No, that would take the fun out of it.

Do you have any doubts about your indecision?

I feel like at this point indecisiveness is a key building block to my brand.

The answer to the question everybody wants to know: Dwight, what’s your decision … that you are not making?

It’s like I said, “This moment is what matters.” At this moment, I want to watch Finding Nemo. Primarily, Jim, the key for me is not being cold.

Some men leave for rings and some men leave for money. I could have gone to Chicago, but that place is basically an Arctic research base nine months of the year, and I have no interest in growing some crazy, frosted-over beard. Even though I really did think Kurt Russell was a boss in The Thing. So that rules out the Windy City. Then you’ve got Brooklyn …

You are aware that Brooklyn is not exactly Scottsdale, Arizona, right? And do I need to point out that the weather in Orlando is rather … temperate?