Today we ask: If you were Sam Presti, which veteran would you have signed to help the Thunder?

Kirk Goldsberry: Man. If I were Sam Presti, I would’ve tried to get Warby Parker, but it looks like he already signed him to the max.

Speaking of vision, I would’ve found a sighted veteran graphic designer, so that my new D-League team logo didn’t look like it fell off a pack of off-brand cigs.

But seriously, before we get involved in hypotheticals, let’s revisit three quick facts.

1. In their final game last year, Kevin Durant played 52 minutes, and only FIVE guys scored. One of those guys is now coaching the New York Knicks. I think it’s fair to say they needed to get deeper this summer.

2. They did add Anthony Morrow, who I love as a shooter.

3. They missed on Pau Gasol.

The third one was huge. The glaring weakness in OKC is obviously at the 5, and Gasol could’ve remedied that right away. To be fair to Presti, after Gasol, there really wasn’t anyone else available that could’ve patched that hole. Marcin Gortat wasn’t going to leave Washington. I don’t think Channing Frye would’ve been a good fit. You could argue that someone like Jordan Hill could’ve helped, but he got overpaid to stay with the Lakers.

Everything you need to know about the coming season.
Perhaps they should have tried to get in on the Omer Asik deal, which sent the world’s most disgruntled professional athlete to New Orleans?

My wild cards would’ve been Chris Andersen or Carlos Boozer. Why not? After all, this team starts Kendrick Perkins.

Good bigs are hard to find in today’s NBA. I can’t really blame Presti for striking out there, and I think it’s fair to expect better play from the newly mustached Steven Adams. 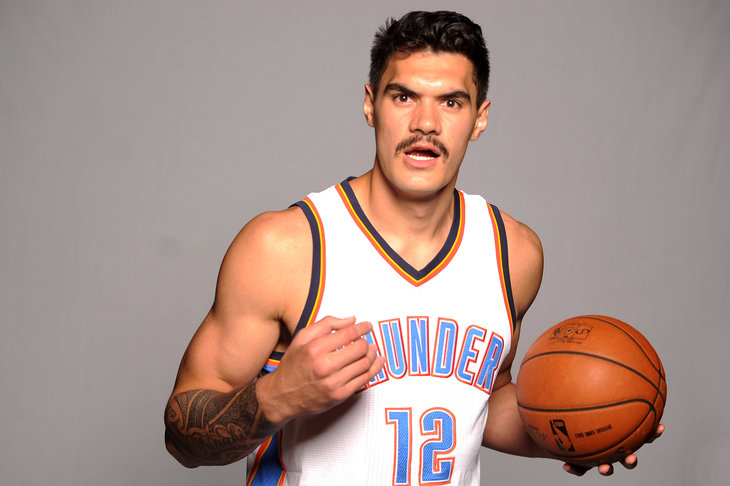 Away from the interior, Morrow and Sebastian Telfair should help, but it would have been great to see someone like Paul Pierce or Vince Carter added to the mix. Both guys have a little left in the tank, and with the loss of Caron Butler, another veteran could have helped stabilize their second unit. Sure, those guys are old, but so is Manu Ginobili, who led the most dominant bench in the league last year.

Andrew Sharp: THIS IS A TRICK QUESTION.

The implication here — “Who would you have signed?” — is that Presti screwed up when he didn’t sign anyone.

Somehow, over the past few months this has become an accepted fact among NBA fans. Everyone points to the quiet OKC summer and then calls the Thunder management cheap and lazy, mocking them, and implying this could all cost them Durant in the long run. I won’t disagree with any of that, as I’m currently praying with all my heart that it really does cost them Durant somehow. But crushing them for free agency is pretty unfair.

The options for Presti weren’t great. They had limited space, first of all, and they also need to save money to at least have a chance of bringing back Reggie Jackson next summer. Nobody they could have signed this summer would be worth tying up money that should go to Reggie. They missed on Gasol with the midlevel exception, sure. But would he have really made that much of a difference? He needs touches to be effective. Was the fourth-quarter offense going to run through the post all of a sudden? Signing Pau is the kind of move a GM makes when he wants to look like he’s doing something to win a title — not when he actually wants to win a title.

As veterans go, adding Morrow was a solid, low-cost, and low-risk move, and unlike Gasol, he’s someone that might actually help this team close out playoff games. Spread the floor with Russell Westbrook, Jackson, KD, and Serge Ibaka, and a shooter like Morrow makes a lot of sense. Mr. Rise and Grind might need to make a follow-up highlight mix.

Now, having said all of that, free agency’s only part of the offseason equation.

He apparently made a promise to Mitch McGary with the no. 21 pick, so now there are two Nick Collisons on the Thunder. I really like McGary — his passing, screens, and unmedicated-ADHD hustle can help anyone — but with Ibaka and Adams in front of him, he can only help so much. The Thunder are already better off going small, anyway. Then Presti got cute at no. 29 and took a borderline draft pick in Josh Huestis from Stanford, a player who literally won’t play in the NBA this year, because the Thunder don’t want to pay his guaranteed contract. Even with OKC’s proud history of penny-pinching, this was groundbreaking stuff.

Meanwhile, they passed on Rodney Hood as an NBA-ready swingman, K.J. McDaniels as a prospect, P.J. Hairston as some combination of the two, and Cleanthony Early as one of the biggest sleepers in the draft. Any of these guys could have helped this season and made the rotation deeper for the future. And that’s where the Thunder deserve all the criticism they’ve gotten the past few months.

Ignoring the draft is a big reason why a team like the Heat had no depth down the stretch the past few years. Exploiting the draft is a big reason the Spurs have been able to stay dominant for the better part of two decades. Nothing the Thunder did this summer was going to change their core that much, but they had a chance to get younger and scarier off the bench, and for some reason Presti went with the Miami approach. In other words: If you hear someone call OKC cheap and lazy this year, by all means, nod your head. But it has nothing to do with free agency last summer. Draft night is when that myth became real.