Derrick Rose comes down the court on the break, the Raptors aren’t ready, and he explodes past Terrence Ross for a layup in traffic.

“Olympics, huh?” Reggie Miller says. “Not all the way there, huh?”

They show the replay.

“There’s no defense to that. The elevation is there, you see the nice little finger roll …”

It’s great. So great even Miller can’t ruin it. That layup gives Rose 20 points and the Bulls an 18-point lead after dominating the Raptors in the second half. There are five minutes left, and I realize it’s probably time to take Rose out, but I’m glad he is still in there. He’s playing well, the game looks easy, and after a week of endless takes on Rose’s approach to injuries, it’s just nice to watch him play basketball.

With two minutes left, he goes down awkwardly and hobbles over to the bench. They show the replay while Reggie narrates.

Rose injured his left hamstring Thursday night, and now the whole conversation from earlier this week will just keep going.

“I know a lot of people get mad when they see me sit out or whatever,” Rose said Tuesday. “But I think a lot of people don’t understand that … when I sit out it’s not because of this year.

When he said this, some on Twitter immediately rushed to remind us that Rose has a right to care about his own body. He can say whatever he wants. He doesn’t owe us anything.

That’s obviously true, but something about what he said struck me as off. Did he really say he’s skipping games now so he can avoid being sore in meetings after he retires? It’s one thing if he’s hurt and saving himself for later in the season, but “it’s not about this year”?

Think of any older pro athletes you’ve ever seen. Don’t they all hobble a little bit? It’s part of the trade-off that comes with getting paid millions of dollars to pay professional sports. My stepdad didn’t even play pro sports, but he tore his knee playing college baseball, and he hobbles around, too. It’s not exactly life-altering hardship we’re talking about here.

I love Derrick Rose, and at this point, everyone in the world wants him to be happy and healthy. But that was pretty crazy, right? This is why I was so happy to see him play basketball Thursday.

“I was just worrying about myself,” he clarified before the Raptors game. “Just worrying about my future, like every player in the league does. I probably just think different. It’s only my seventh year, but I think further on into my career, further on into my life. Just trying to plan things out. I think people took it out of context. It is what it is, but I was being myself, and that’s all I can be.”

Rose absolutely has the right to care about protecting his future, but if he’s really not playing games in 2014 to protect himself from limping at 50 years old, Bulls fans have a right to be a little freaked out. 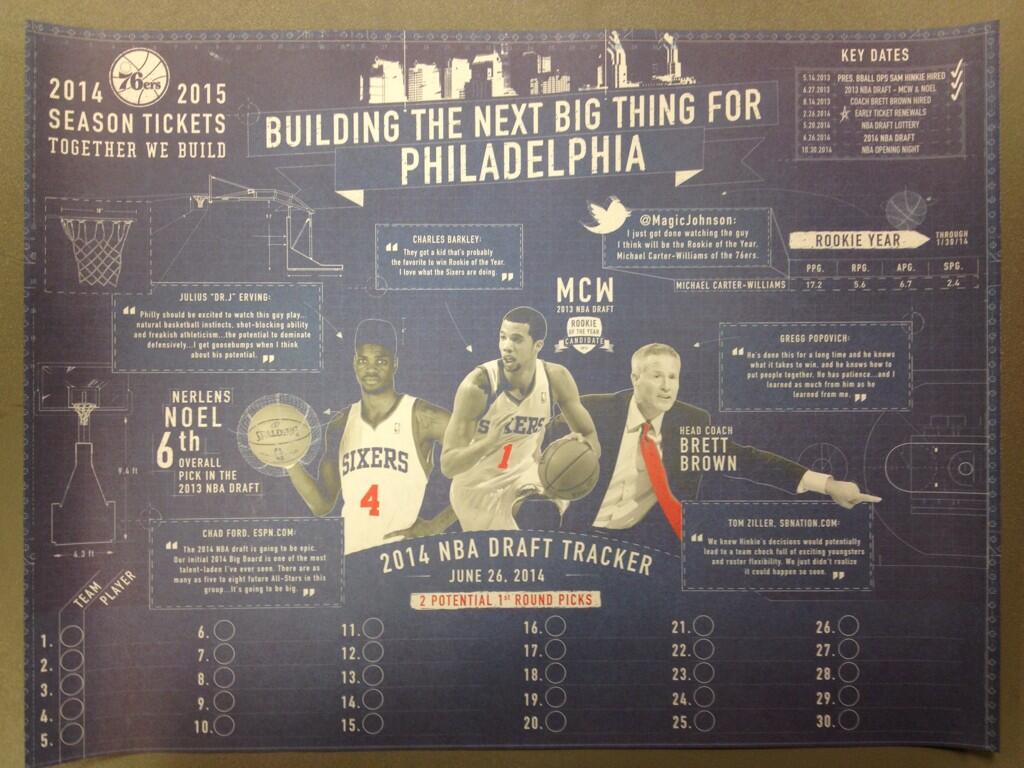 I was thinking of Rose’s Tuesday comments when I read this essay from Michael Carter-Williams. It wasn’t an interview, but a published release, polished by God-knows-how-many PR people and editors, and reading it made my eyes roll so far back in my head I thought I’d never see again. MCW is here to clear up some myths about the Sixers and tanking:

In the middle of the playoff race, a race we were decidedly not in, it seemed like the entire media spotlight was on us. And trust me, I get it. We had lost 26 games in a row. … My problem is that it was missing a lot of context. We didn’t even have the worst record in the league at the time, but the average person watching on TV probably didn’t know that. The media spin was that we were tanking the season so we could get the number one draft pick.

Come on. The Sixers weren’t tanking? Sam Hinkie gutted the roster to lose big and start from scratch with a team full of lottery picks. That wasn’t media spin. MCW’s essay is media spin, and it’s not even very good. Saying “players try hard so their team can’t possibly be tanking” is logic designed for a 12-year-old.

It would’ve been a lot more interesting to read MCW write about the nights he wondered whether it was even worth trying. There had to have been those moments, right? Did he ever resent the team for putting him in that position? Or maybe he could write about draft night this year, when his GM tried to trade him after he’d just spent the entire season playing hard every night on a roster designed to fail.

Of course, this all starts with Hinkie. He’s the man who built this nightmare of a roster with the dream of turning lottery picks into a contender a few years from now. While Rose was playing the fourth quarter Thursday night, I noticed the Sixers-Mavericks score, and it was even more amazing than most Sixers scores from the past year. It was beyond blowout territory, and it hadn’t even hit halftime.

He’s definitely proven he can build a horrible team.

It’s still up for debate whether this is a smart strategy, but that’s a separate topic. For now, the biggest challenge facing the Sixers over the next few years comes from the rest of the NBA. Things got so out of hand last year that the league proposed lottery reform specifically designed to combat Philadelphia’s strategies. The reform failed in the end, but it’s indicative of the contempt most basketball people feel toward the Sixers.

The team is a laughingstock around the league, fans and media treat the roster like a freak show, and Hinkie’s tactics leave players like MCW awkwardly defending themselves while they waste away on a squad designed to sink straight to the bottom. Hinkie rarely discusses any of this publicly, but his actions — and ploys like the Sixers’ “blueprint” marketing plan — make it pretty clear the present isn’t a priority. Meanwhile, every Sixers blowout brings the same conversations about the ethics of tanking, whether the NBA should intervene, and how the Sixers can possibly do all of this with a straight face.

The Mavericks were up 57-19 with six minutes left in the second quarter, when I first saw the score. They would eventually win by 53.

“It’s pretty important that you learn how to keep your own scoreboard,” Hinkie said in a rare interview last year. “And how to be focused on what truly matters over the long term.”

Do you see how this can piss people off?

MCW didn't get back on D. Brown yelled at him to get back then went to talk to him during stoppage. MCW appeared to point to scoreboard

Derrick Rose and Sam Hinkie have the same problem. It’s one thing to plan for the future, but it’s another thing to be this honest about the present. Of course people will get angry.

Of course columnists will cite ticket prices and salary numbers and start talking about a responsibility to the fans.

You could argue it’s reactionary and unfair, and say it’s insane that people care this much about November basketball games, and that’s probably true. But it’s not exactly a cause for sympathy. People caring way too much is why everyone involved in pro sports is making massive amounts of money. All of this comes with the territory. That’s what the money’s for.

This is where it gets complicated, though. Even if the reactions to Hinkie and Rose are predictable, can you really blame either one of them? If two years of rehabbing triggered some fear of a forever-injured future, I can’t get that upset with Rose for doing his best to avoid it. His explanations are clumsy and tone-deaf, but he’s not even hurting the Bulls’ title chances. Resting now is smart, because having him available and comfortable five months from now is more important. As Joakim Noah said after Thursday’s game, everyone needs to chill the fuck out.

It’s the same with Hinkie. If he really believes this is the best way to build a contender, it’s hard to criticize him going for it as aggressively as possible. Games like Thursday are what that looks like. It’ll either work, or he’ll get fired in a few years.

When you break it down, the problem isn’t the transparency. If Rose were missing games and said he’s resting for a championship, people in Chicago would still question his toughness and psychoanalyze every facial expression. If Hinkie were trying to win 30 games instead of winning 10, Sixers fans would wonder why Philly hired him in the first place.

Today’s sports fans are more informed than ever, and sometimes more enlightened, too. People are smart enough to understand why tanking makes sense, and we can even empathize when athletes worry about long-term health. But sports fans still care more about actual sports than injury rehab or hypothetical titles in 2018. That’s not a criticism, it’s just the reality we sometimes forget during these endless debates about whether it’s socially acceptable to be frustrated with Rose.

It does leave athletes like Rose in a tricky position, though. If he’s genuinely worried about his long-term health, what is he supposed to say?

If Hinkie thinks tanking is the best option, what is he supposed to do? Rose is honest about his plan, Hinkie is mostly tight-lipped and out of sight, and both get about the same amount of backlash. Then there’s Carter-Williams, who tried to defend himself against Sixers jokes and came out looking more ridiculous.

It all had me thinking of LeBron on Thursday. In 2010 he was clumsy with his words — tone-deaf like Rose was this week — and he became the most vilified athlete in America, and “taking my talents to South Beach” became a punch line that’s still funny to this day. Then this summer, he announced his return to Cleveland in a letter that — several months of marketing campaigns later — reads almost as corny and ridiculous as the Carter-Williams letter. Only one of those moves made people angry, because by 2014, LeBron had titles. Try to imagine LeBron with no rings this summer, writing an open letter to America about the value of home and the virtues of Northeast Ohio, as he announces he’s joining another super-team. There would have been a national petition to shoot him into outer space.

Instead, most of America loved that letter, we gave LeBron the benefit of the doubt, and everyone was pretty much happy with the whole thing.

Now matter how smart or enlightened we get, the only time sports fans aren’t horribly cynical is when athletes and teams actually win. Carter-Williams will get the respect he wants when his team stops losing games by 50. If the Sixers put together a real contender, nobody will care that Hinkie spent two years losing to build it. And Rose will either stay healthy or he won’t. For now, the saddest part of his injuries is watching one of the three or four best players of this generation get swallowed by this stupid fucking argument about whether he’s tough enough.

Nothing Rose can say will make a difference. This is sports, and if you play well, people will convince themselves you’re a warrior full of intangibles. If not, they’ll talk themselves into doubting your toughness.

When players or teams are struggling, nothing anyone can say will make a difference. We see through the PR schlock of MCW, we call out Hinkie’s obnoxious strategy without him saying a word, and honest quotes from Rose just make everything worse.

Or, actually, this is all just a long way of saying that with fans and media, maybe Rasheed had the perfect answer 15 years ago.