Thursday, May 15: at New York Mets

It’s both strange and a little sad to say good-bye to the Mets forever. You’ve spent your whole career playing so close to them, and yet there’s really no connection there. We do our own winning thing on our side of the city, and they do whatever it is they do over in Flushing, and we never intersect other than the interleague Subway Series. They’re pretty close to that nice U.S. Open tennis center, maybe they hit some balls around, you don’t know because you’re too busy to check up on them. Maybe they camp out after games in the old World’s Fair grounds, cook borrowed ballpark hot dogs over some trash cans. That sounds fun for them. Outdoorsy. You hope it’s something like that. It’s good to have other interests when your season’s effectively over so early in the year. You imagine that would take your mind off things a bit.

The Mets give me a check for $22,222.22 for my Turn 2 foundation, which was a very nice gesture, and cute with all the 2s in the number. I joke around with Jeff Wilpon, the son of the owner, that the check was actually for $222.22. He goes pale, pulls me aside for a second, and whispers, “Don’t cash this right away. We’ve got to move some stuff around.” I look into his eyes to see if he’s joking. I promise him I’ll wait till Monday, and he finally blinks. It’s a relief. His hand was gripping my shoulder pretty hard for a minute there.

They also give me a subway tile with the number 2 on it. Another very thoughtful gift, it will look great in the sub-annex to the Final Season Gallery down in my Tampa place, where the National League stuff goes. You kind want to kid around that they pulled it off the wall right before the press conference, but after the check thing, you know, best not to open that can of worms again. But I can’t wait to ride the subway for the first time after I retire. Hat pulled down over my eyes, some thick glasses, maybe a fake mustache. Knicks jacket. Just riding around and watching people for hours, wondering if they know it’s me sitting across from them. I hear it’s a great place for connecting with humanity. Maybe I’ll see someone wearing my jersey. I’ll play it cool, give a nod. You like that guy? Yeah, he was OK. We’ll share a moment that only I totally understand.

It’s weird how all this can go through your head in the three minutes you’ve allotted other teams to recognize your career before a game. You should be doing your warm-up visualizations, but this is what happens. It’s part of why you’re uncomfortable with the whole thing. Maybe you’re wearing a Jets jacket. Better disguise.

Friday, May 16: Rainout vs. Pittsburgh Pirates

I expect to get a visit from A-Rod, but he’s not around. I get bored because of the rainout and text him, asking if he’s going to watch the game tomorrow.

I turn on the TV, and there’s a story on SportsCenter about how Ryne Sandberg thinks he got diarrhea from eating at Shake Shack at Citi Field. You hate to use crass language like that in your diary, but that’s just a clinical description of what Ryno said happened. You feel for the guy, he’s a Hall of Famer, he deserves better than to get food poisoning on the road. But he should probably know better than to eat at Citi. I didn’t touch the subway cake they gave me at the ceremony. You can’t be too careful. You even bring your own Gatorade when you go there.

Later that night, the wardrobe doors fly open and a crumpled note lands on the bed next to me. I open it.

Jetes — Flattered you miss me. I don’t watch Pittsburgh. Common.

Tomorrow I gallop in fields of gold poppies. So special. —Alex

He’s really become haughty since the transformation. Not a good look, in my opinion. It can’t be all golden poppy fields in there. The land inside the wardrobe probably has its Pittsburgh too.

Saturday, May 17: vs. Pittsburgh Pirates

Five–home run game for us. It’s nice when the offense is clicking so that we can pick up Phelpsy, who’s still in the rotation because of all the pitching injuries.

The new kid Betances has been impressive picking up slack when the fill-in starters can’t go long. He’s striking everybody out. He’s got filthy stuff, throws 97, he’s a big guy. I pull him aside in the dugout for a chat after he pitches well but gives up a solo homer.

I guarantee he doesn’t give up another homer for a month. Sometimes as Captain it’s your job to put things in perspective for the rookies.

Sunday, May 18: vs. Pittsburgh Pirates (doubleheader)

The Pirates have this kid, Gerrit Cole, who pitches the second game of the doubleheader. He’s got an interesting story. He grew up rooting for the Yankees. We drafted him in the first round in 2008, right out of high school. A dream come true. A dream I can relate to, because the Yankees are the only organization I’ve ever wanted to play for, and I was lucky enough that they drafted me back in 1992, also right out of high school. Well, it wasn’t all luck. I played as hard as I could every day to put myself into a position where the only team I wanted to play for would have the opportunity to draft me. You put in the work to make things easier for luck, and things tend to work out.

But Gerrit Cole turned down the Yankees to go to college. The Pirates drafted him in 2011. Sometimes the luck thing doesn’t work. Not twice, anyway. You can’t throw out a winning lottery ticket and expect to win the Powerball again the next time you play.

You have to tip your hat to him, because he pitched a good game, even if his first start at the Stadium was for the wrong team. I send him a signed baseball when he comes out after the sixth inning:

Seems pretty fun to have Jordy Mercer playing behind you. —DJ2 Last Season

CC’s out until July. He’s got what they’re calling a degenerative condition in his knee. Bone is grinding on bone.

Beltran’s got a bone spur in his elbow. He’s going to try and play through it, but he’s on the DL and out indefinitely.

They’re both veterans with a lot of major league miles on their bodies. People break down as they get older. It’s natural. Your instinct is to write off the injuries to wear and tear and age.

But it’s harder to do that when you get to your hotel room in Chicago and find a pinstriped velvet bag resting on the bed. And you open it to discover it’s full of bone fragments. It makes an awful sound when you jiggle it in your hand.

It’s only when you dump out all the bone pieces onto the floor, bits of shattered knees and elbows and ankles scattering everywhere, that you notice the monogram on the bottom of the bag.

I get a room change immediately. There’s no bag in the second room.

Tuesday, May 20: at Chicago Cubs 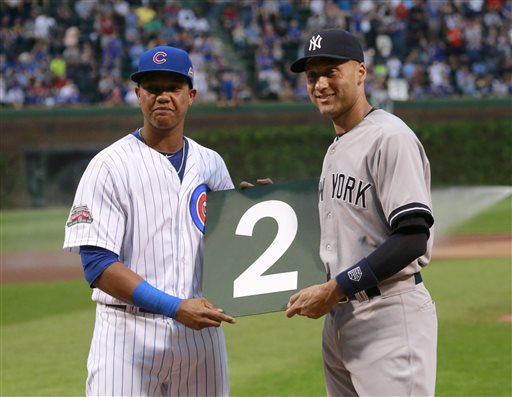 This is a pretty special road trip, because when I was young, my family used to drive from Michigan and take me to games at Wrigley. I always asked how much longer it would take keep going all the way to Yankee Stadium, and my parents would laugh even though they knew I wasn’t joking. They had no way of knowing I’d eventually fulfill every baseball dream there.

The Cubs brought out Ernie Banks for my good-bye ceremony. It’s always an incredible honor to talk with a historically great shortstop like that. He’s definitely someone you want to emulate, even if he only played like half his games at short. Being with him makes you reflect on your own career and wonder what it would have been like to switch to first base in the middle of your prime. It’s hard to relate to, though, since no one ever brought that up as a possibility. Mr. Torre and Girardi just kept sending me out to shortstop, game after game after game for 19 seasons. You play where you’re told to play. All you can do is check the lineup card every day and hope they write a 6 or SS next to your position and don’t make you confront an existential dilemma you’re not ready for.

The Cubs also presented me with a number 2 from their hand-operated scoreboard. It was a pretty cool gift to get. When you were a high school kid sitting in the Wrigley stands in the summer, you never imagined that one day there would be a mix-up over your retirement gift and someone would just run to the outfield and pull a number right off the board for you like it’s no big deal. It’s a very big deal. They may never get to play another second inning in this ballpark. That’s an incredibly humbling thought to have every time you’re visiting the sub-annex. It’ll definitely get a better spot on the wall than the subway tile.

Wednesday, May 21: at Chicago Cubs

Today the Cubbies gave me a W for my last game here. After 13 innings.

And that’s the best going-away present of all.

Well, the World Series will be the greatest going-away present. But the Cubs obviously can’t give me a championship. They’d probably want to keep that for themselves; it’s been awhile for them. Your heart breaks when you think about what their fans have been through. You want to take them back to New York with you. Pile them in the family station wagon and tell them on the way to Wrigley that we’re actually driving all the way to New York. To the Bronx. To the Stadium.

And then maybe we all spend some time riding the subway together.

We can nod to the person in the no. 2 jersey.