The days after the All-Star Game are important ones. Yes, they’re some of the worst of the year, because there’s no baseball, and summer days without baseball are like a fro-yo store that runs out of the gummy bear toppings, because what are you going to do, put crumbled Oreos on them like a 5-year-old? But that doesn’t mean these days don’t have their use, even if they’re ruined by what they lack. They’re still a quiet time to reflect on the half-season that just passed and to look ahead to the games that still await you on your path to the playoffs.

So you go to your diary to reflect on the previous four months. You open it up to a fresh, blank page. You lay your special journal pencil in the center crease. And you start the reflection process.

But then you quickly realize there’s zero value in reflection. Why look back on things you can’t change? They happened. You can’t make them un-happen without a time machine, and even then who knows which parallel universe of unintended consequences you’d find yourself living in. If you take Tanaka out of an early July game, maybe a player piano falls on Ellsbury while he’s walking down the street in Manhattan, or Teixeira ruptures his spleen hailing a cab. If you use the McCann and Beltran money to re-sign Cano, maybe Brett Gardner experiences a freakish growth spurt and loses his quickness and coordination. You can’t mess with your reality like that. You just have to accept the one you’re already living in and give your best effort every day.

So you pick up that pencil and decide to only look forward. What needs to happen for the team to be successful in the second half? What can you, as a Captain, do to lead them on that path to success?

If the pitching’s been bad, well, you’re a shortstop, you can’t actually throw the ball for them. But you make the plays behind them. You slow down the game for them with a mound conference if things are getting rough, and you calm them down with timeless wisdom like “throw strikes” and “you got this.” Sometimes just knowing that their Captain probably believes in their ability to get the job done is enough. You see that light go on in their eyes. “This championship-level player thinks I got this.”

Maybe these aren’t great revelations. But you know what? Baseball’s a simple sport. It’s an incredibly difficult sport, the hardest sport in the world. People will tell you it’s the sport where if you fail only seven times out of 10, you’re a Hall of Famer. But that’s not true. You have to fail zero times out of 10, because the great players don’t ever fail. They succeed or they learn how to succeed next time. They don’t look back. They only look ahead.

So you pick up your pencil and draw a huge arrow pointing forward, left to right across the page of your diary.

And across another set of pages. And another. After a couple of sets you get the point, and you don’t want to waste an entire diary on arrow-drawing.

But at the end of that very long arrow is a drawing of a ring. A World Series ring with the date 2014 on it.

That’s the only entry you need to write going into the second half.

Reflection is for mirrors, not diaries.

And now we find out that CC is out for the rest of season with knee surgery. It’s not the worst kind of knee surgery he could be having, but if you ask me, no surgery that takes you out of a pennant race is a good surgery.

You feel for him. You know he wants to be out there, fighting with the team. He’s a warrior. But sometimes warriors go down in the field because maybe they waited too long to start taking proper care of their bodies and they can’t undo the damage of the previous battles. You tip your helmet to them. But then you have to move on. Because you have to go fight with the army you have right now, not the one you thought you were going to have in spring training.

You know, the one with five healthy pitchers. You have to let go of that one. The four replacement guys will have to do.

Anyway, it’s a sad moment. CC and I won’t get to play together again. But we’ll always be brothers. We won a championship together. He has his pinstripes for eternity. Unless he comes back next year and demands a trade to Boston, but you don’t foresee that happening unless something goes really wrong with his surgery and they damage his brain, which is pretty rare in knee operations. 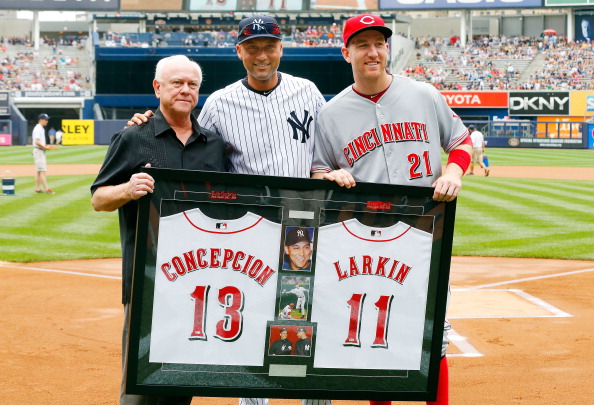 Before the game, the Reds give me two signed jerseys, from their former shortstop captains Barry Larkin and Davey Concepcion. Small-c captains, but captains nonetheless. You appreciate the gesture. The Reds can’t help that their captainship isn’t the same kind of mythical lineage we have on the Yankees, but they do the best they can with the lesser tradition they have. You admire them for it.

They also gave me a framed photo from the game we played in Cincinnati on June 3, 2003, the start of my Captainversary. Another thoughtful gesture. That was a very special day for me, even if it was strange to have it happen away from Yankee Stadium. But you don’t get to decide where you become Captain. It just happens. It could have been in San Diego. It could have happened in Arlington. You don’t know. You wake up in the middle of the night feeling different, and then you get the bedside visitation from Mr. Gehrig’s spirit confirming your transformation with a silent nod of his head before he traces a C over your heart and disappears back into the Pinstripe Forever. Maybe you wish it didn’t happen at the Great American Courtyard by Marriott, but in the end, it doesn’t really matter. All that matters is that you’ve been chosen for the greatest honor in all of sports, even if you get the message in Cincy and follow it up with a pretty mediocre continental breakfast in the morning. They were out of croissants; you definitely don’t forget something like that. There’s no way the Reds could’ve known, so you’re not too disappointed the nice photo didn’t also come with a basket of French pastry to offer that extra bit of closure.

This one was too close for comfort, but we get our sweep anyway. That’s exactly how you want to start out the second half. Three in a row. Put together a streak and take that momentum with you into the next series.

And we finished the sweep against Cueto, their best starter, and Chapman, a closer who throws 102. That kid Todd Frazier made it interesting by homering off Betances in the eighth. The media made a big deal of the fact that when he was 12 he had his picture taken with me after winning the Little League World Series and 16 years later we’re playing in the same All-Star Game, and then again here at the Stadium in my last season. It’s a nice story, even if the point of it was to make me feel old, which it didn’t; I feel exactly the same as I did that day in ’98. I even remember meeting him back then and telling him to do whatever it takes to make sure the Yankees drafted him. You wonder how his career would have turned out had he taken that advice. But he’s still pretty young. He can still get here if he wants it enough and wants to win a real World Series in New York one day.

Five hits and five errors. You don’t need one of those saber-guys to tell you that you’re not going to win a lot of games with that hit-to-error ratio. You have to play better than that, especially against one of the worst teams in the league. That’s a momentum killer.

So was the double play I hit into with the bases loaded in the fifth. You never look back, but you also never duck accountability in your diary. You’ve always been the first one to admit when you didn’t get the job done, as rare a situation as that is. Baseball will humble you, even if you’re already a huge believer in humility. Nobody’s above a double-humbling. Not even a Captain playing in front of his hometown crowd.

It’s that time of year when it feels like the roster’s changing almost every day. Guys getting called up, getting sent back down.

Getting traded as the deadline approaches.

I’m gonna miss Yangervis. It’s never fun to say good-bye to a teammate, but if you can turn a rookie who wasn’t even supposed to make the team in spring training for an everyday third baseman who hit 30 homers a couple of seasons ago, you have to do it. You can’t be sentimental about it. But still you sit for a long time, wondering how to inscribe the going-away baseball in a way that’s a special reminder of his time with the Yankees, until the perfect words finally hit you:

The new guy, Chase Headley from the Padres, arrives at the Stadium in the eighth inning and goes straight into the game.

And winds up getting the walk-off single in the bottom of the 14th. Putting on the pinstripes does magical things sometimes. You see it again and again. Earning the pinstripes is another thing entirely, but getting a Gatorade bath in your first game here is a pretty good start to a Yankees career.

I go home excited about the big extra-innings win, and A-Rod is already out of the wardrobe, wearing his Yankees jersey and pacing the apartment. I haven’t seen him wear it since the end of last season.

“What game are you talking about, Jetes?”

“I found it underwhelming, to be honest.”

“Chase is not a good name for a person. Undignified.”

“His name is a verb. Names should be nouns only.”

“No two-way names, Jetes. Noun only.”

“He’s our third baseman now. Maybe you should get used to it.”

“Not this season, Alex.”

“I still have a contract.”

“You’re suspended. And you can’t play in your centaur form. You know that.”

“We have to get rid of that Chase Headley, Jetes.”

“We need him for the stretch run.”

“Will you eliminate him for me?”

“Then I will hire a goblin assassin in the ’drobe.”

“He’s a free agent at the end of the season.”

“And then what, Jetes? What if they re-sign him?”

“Worry about that in November.”

“Then can I have the goblin kill him?”

“The goblins are surprisingly dependable.”

“I’m glad we understand each other.”

“We understand that I am the New York Yankees’ rightful third baseman.”

“We’ll see what the goblin says about next year.”

“Goblins have minds of their own, Jetes. You can’t control where the conversation is going.”

“I can control the end of this conversation. Good night, Alex.”

I open the door to the wardrobe and wave him inside.

He takes off his jersey and throws it to me.

“You can give that to your Chase Headley.”

“It’s covered in my territorial musk.”

I sniff the jersey. The scent is overpowering.

“Stallion essence, Jetes. He can suffocate on it.”

Alex climbs inside the wardrobe and I shut the door.

Then open it again and toss the jersey inside.