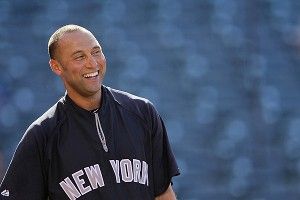 Wednesday, May 23: vs. Kansas City

Some kid named “Will Smith” made his big-league debut against us tonight. Now, I know what you’re thinking: That kid has the same name as Will Smith, a very big Hollywood actor who’s starred in all kinds of huge hits, like that movie about the magic seven-pound heart, and it must have been a big struggle to get through the minors with everyone calling you “Fresh Prince” and “Hitch” and “Six Degrees of Separation” or whatever. I’m sure it was. And it probably didn’t help matters that before the game, the real Will Smith, who’s a very close personal friend, called me up and said he was suing this kid for trademark infringement unless he changed his name to “Bart Johnson.” (I have no idea why he picked “Bart Johnson,” but I assume he has his reasons — he’s a very deliberate guy.) But in this league, no matter how many movie stars with the same name are threatening to have their lawyers take your per diem and light it on fire in front of your children, you still have to go out there and get the job done. Anyway, we lit that kid up pretty good at the Stadium, in front of his parents, and you feel bad for him, but you also sort of don’t. The thing you’d probably feel bad about would be if you called up your movie star friend after the game to tell him “finish him off” and he said, “I’m going to be the nightmare he never wakes up from” and then laughs that very famous laugh. If you did it, which maybe you didn’t. The whole competition thing can get pretty dark sometimes, or so people tell me.

We’d all been worried about how A-Rod seems to have lost his power stroke, but he promised everybody he was about to “go off,” and he hit two of them. That’s great. Also great was the look on his face when I asked him, “Why not three?” I mean, I was just trying to stop him from smiling because when he smiles, he kind of looks like an evil horse doing math, but really, why not? He’s getting paid like $30 million a year through age 49 — let’s do something a little more special than two home runs. Give the doctors in Germany something to be proud of.

So that’s two in a row since Cashman called a closed-door meeting before yesterday’s game. I feel like since it went public that we had a closed-door meeting, it’s OK to talk about what was said here. He basically just told us that he believes in us, that we have all the talent we need to go all the way, and that he would give Nick Swisher a thousand dollars in cash if he could light a fart on the spot. Swish made $4,000. I could’ve told him that was a sucker bet, but he didn’t ask me.

This was our first day off in more than two weeks, and now we have to head off for a nine-game road trip to the West Coast and Detroit. Don’t let Josh Beckett tell you we don’t work hard, that this game is all golf and Popeyes 14-piece baskets of extra-crispy. First of all, he’s a pitcher, and we already know they’re not full-time players. Second of all, he plays for Bobby Valentine, whose nickname in Japan was “Pumpkin-Colored Lazyman the Americans Didn’t Want,” but with the appropriate Japanese words. This is a grueling game. Believe it.

Do you watch So You Think You Can Dance? I always try to get caught up on the travel days. SYTYCD is the best. The body is poetry, and these kids are so brave to get up there and read their body-poems in front of millions of people every week. I really admire them. It just started, so it’s too early to pick a favorite yet. But know it won’t be any of the ones who do that bullshit modern twist on ballet stuff. If you’re going to do ballet, do it classically. Don’t garbage it up with jazz or break-dancing or whatever. That makes me sick. Respect the form.

In the movie Moneyball, Brad Pitt says something like, “There are rich teams and there are poor teams. Then there’s 50 feet of crap. And then there’s us.” I don’t know why they felt the need to attack the Yankees like that, as if we’re eating steak made of gold while standing on some kind of crap-mountain that’s crushing them to death. That’s not really the case anymore. There’s a luxury tax now, and revenue sharing, and we let Oakland have Bartolo Colon back when we were done with him. That seems pretty fair — let’s not make another big movie out of it that ultimately doesn’t win any Oscars. Don’t get me wrong, there’s obviously a revenue disparity, especially when you look at the upper deck they’ve closed off at Overstock.com Coliseum and realize there’s an entire Slumdog Millionaire shantytown up there now, and that there’s an unmanned donkey-cart wandering around center on nights they can’t scrape up the money for an actual third outfielder. But that’s more a mismanagement question than an unfairness question, trust me. They pay for the clubhouse soda machine now, they’re not necessarily putting all their money between the lines anymore.

Three in a row, by the way. You feel a little embarrassed talking about it given the circumstances, but a W is a W is a W. (Three of them, in a row, not to put too fine a point on it.)

Saturday, May 26: at Oakland

It’s bittersweet when you beat an old friend like Bartolo, because you still have some positive feelings for the guy, even if he’s not on your team anymore. But at the same time, it’s your job to go out there and do your best to ruin his life. You have to. It’s not your fault he didn’t try to stay with the Yankees, even though Cashman didn’t want him back, but he should’ve taken the hint to retire. Even after the game, when I texted him “Retire? Plz? i dont want 2 hurt u — DJ2,” he just hit me back with like 10 straight frownicons and then something that looked like a cat eating a baseball. Some people are stubborn like that. I’m not even sure they’re carrying a shortstop on their 14-man roster, much less one who’s looking out for his best interests.

I felt like I had a nice game in the field, and then I heard Girardi said this in the postgame: “CC was getting ground balls. That was an important thing. He was giving up ground balls and Jeet was able to get some of them.” Hold on a second, Skip. Some of them? You never appreciate your manager taking shots at you in the press like that. If you’ve got passive-aggressive praise for a guy, be a man and deliver it face-to-face. Do what I do: go up to his locker and say, “Pretty good day out there. You got to what you could,” and then wander off to the cold-cut table to make yourself a pastrami sandwich while he tries to decide if you’re playing mind games. It’s just the respectful way to handle psychological warfare. Don’t depend on someone’s Google Alerts to deliver a message. They might not even see it — things land in your spam folder sometimes.

Four in a row. That bears mentioning. We’re making a move.

I’ll just tell you it’s five in a row up top. Then we won’t get to that awkward part at the end of an entry where I have to find a way to bring it up.

They tell me I passed George Brett on the all-time hits list. If you gave me a hundred million dollars, I probably couldn’t tell you exactly how many hits I have in my career, just that now it’s more than he had. They even put out a nice press release from Brett congratulating me after the game. On the one hand, that’s very classy and considerate of him. But on the other, it puts you in a difficult position, because this guy was a notorious user of pine tar, and you can’t support that, especially when you’ve very publicly reached all your milestones without performance-enhancers. So I guess all I can say is: Thanks, Mr. Brett, but I can’t condone the way you made the Hall of Fame. If, God willing, I’m lucky enough to make it there, I’m going in without sticky hands.

I’m no manager, I’m just a player with five World Series rings, but you have to wonder if our weird bullpen usage cost you a game if you’re in a position where David Phelps gives up up crucial runs and Cory Wade is on the mound for a walk-off homer. Girardi swears by The Binder. You know what? Tonight I peeked in The Binder while Joe was using the bathroom and the first 20 pages of charts had a chapter from Fifty Shades of Grey Scotch-taped to them, and page 21 was a pencil sketch of a couple of players reenacting what I assume to be a scene from the book. That’s a pretty filthy book, you guys — don’t let your wives read it. I’m not going to say who was in the drawing, and I’m not going to say what they were doing in the drawing. All I will say is that Skip is a surprisingly gifted artist and that it’s going to be more or less impossible not to think about Eric Chavez sitting on a very uncomfortable-looking saddle while dipping a riding crop in chocolate.

It’ll be a while before I try to look in The Binder again. Use four different relievers to throw four total pitches, I don’t care, you probably have your reasons.

Tuesday May 29: at Anaheim

It’s no secret we don’t particularly like playing in Anaheim. You never want to come up short here, especially two nights in a row, because then you have to hear all the talk about how Mike Scioscia “has our number,” which is nonsense, even if the numbers would seem to support that nonsense. And you have to put up with that Rally Monkey about 50 times a game. You hate to spread rumors, but I’ve heard each monkey only lasts a couple of days before he’s used up his “rally mojo,” then he’s sent off to a cosmetics testing facility to die. Go ahead and perpetuate a barbaric system where a helpless animal spends his last moments dancing for your amusement before being slowly eyelinered to death, Angels fans. It’s your conscience.