We’ve known the names for seven months, but all lined up — nameplate after nameplate in the Broncos’ locker room — it’s still something to see. DeMarcus Ware gets dressed next to Terrance Knighton. T.J. Ward sits a couple of lockers down from Aqib Talib. Von Miller’s locker is directly across the room from Chris Harris. It’s an all-star team, and it has played better than even the people building it could have hoped.

There are “Free-Agency Champions” trophies rusting in closets all over the NFL. A March haul rarely ensures October success. Ware, Ward, and Talib, all free-agency prizes, have played their part for the Broncos defense, but what’s made Denver so dominant through seven games is that its roster is built on more than the players it bought.

After last season’s AFC Championship Game, the Broncos locker room was missing nearly every piece of the Denver defense that held one of the league’s best offenses in check last night. Both Miller and Harris — arguably the two best players on this year’s unit — missed Denver’s Super Bowl run with torn ACLs. Rahim Moore, who had the game-sealing interception of Philip Rivers, played his last game on November 17. Derek Wolfe, a key to the Denver rush defense that held Branden Oliver to 13 yards on his first 12 carries, didn’t make it past Thanksgiving. A Denver offense that almost had to take a step back after last season hasn’t, but what may make this year’s Broncos truly great is what they’re doing on defense.

Last year, the Broncos offense hardly ever slowed down, running over nearly every defense it faced. The Chargers were an exception — sort of. San Diego fielded one of if not the worst per-play defenses in football a year ago, but of the three games the Broncos scored 28 points or fewer, two came against the Chargers. San Diego’s ball-hog game plan was particularly useful against Peyton Manning. No team sustained drives and held on to the ball more often than Rivers’s. In their two games against San Diego, the Broncos had less than 22 minutes on offense in each. Cue Manning Face. 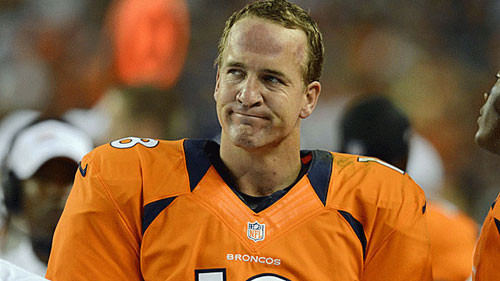 San Diego’s defense has been better this year, thanks in part to a new pair of cornerbacks who have turned around the secondary. But by the end of the first quarter Thursday, both of those cornerbacks were gone. Brandon Flowers was never even there — out with a concussion suffered against the Chiefs. And Jason Verrett couldn’t play through a shoulder injury that many thought would keep him from suiting up at all. That left the Chargers with virtually the same defense they trotted out a year ago, and, predictably, Manning spent the night shredding Shareece Wright and Richard Marshall.

The difference between this year and last is that Manning had more chances to do so. The Broncos actually won the battle for the clock — 30:46 to 29:14. It was a small victory, but a huge departure from what happened last season. The same way Manning can’t score without the ball, Rivers can’t control it if it’s being yanked away.

It started on the ground. The Chargers rushed for 177 yards the last time they came to Denver, winning on a Thursday night. They had about one-third of that last night, with 40 of their 61 yards coming on a Rivers scramble and Oliver’s last run of the game. The Broncos have been stout against the run ever since defensive coordinator Jack Del Rio’s arrival. This is down to scheme and a deep crop of defensive linemen, and with Wolfe and Miller back, Denver is as good as it’s ever been against the run. The Broncos were fourth in run defense DVOA before yesterday, and their dismantling of the Chargers offensive line should only move them up.

“Each week, we always say we have to stop the run first and make the opposing team one-dimensional,” Ware says, “and let guys like me, and Von, and Malik [Jackson], and Terrance — got his first sack this week — really push the pocket.”

In a celebrated free-agent class, Ware stood alone at the top. He’s only a few years removed from being known as perhaps the best defensive player alive. Through seven games with Denver, Ware has seven sacks. Only one player has more this season. And it happens to be the man playing across from him. 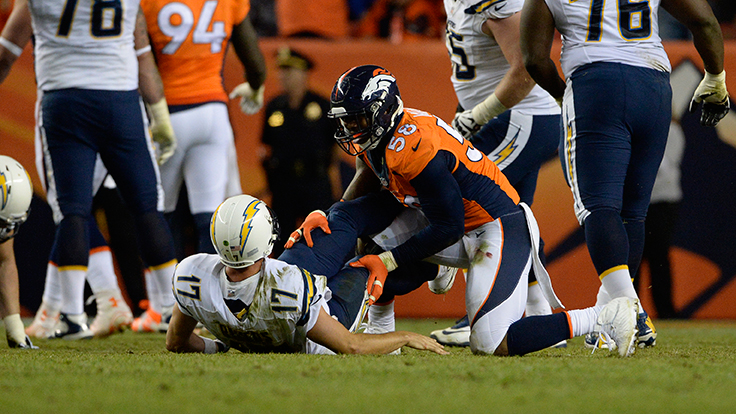 Even before he got hurt a year ago, Miller didn’t look like the player he was in 2012. Back then, he stood firmly behind J.J. Watt among the best defenders in football. This season, that Miller is back. His league-leading nine sacks have a lot to do with that.

What Miller and a revived Ware allow the Broncos to do is rush four and still keep quarterbacks up at night. Coming into last night, Denver was getting pressure on 29.3 percent of opponent dropbacks — the fourth-highest rate in the league, according to ESPN Stats & Info. It did so while blitzing on only 22.8 percent of dropbacks. Only five teams have brought five or more rushers less often. With the secondary the Broncos have assembled, their defense is basically unsolvable.

“We’re going to stop the run, and y’all are going to have to come out here and throw the ball at me and Talib,” Harris says. “And it’s going to be a long day when y’all do that.”

Losing Harris last season wasn’t felt as deeply as Miller’s absence, but make no mistake: Harris is among the most overlooked defensive players in the league. He has gone from being a great slot corner to playing just as well on the outside. Talib has been an enigma for a few years now — a player who’s capable of covering just about anyone one day, and maddeningly unreliable the next — but he and Harris are a real problem for any offense.

From the front end to the back end, the Broncos have better talent than just about any defense in football, and they have the depth to match. Linebacker Brandon Marshall made more plays than anyone in orange last night. He wasn’t expected to play much this season after spending most of 2013 on the practice squad, following his release by a 2-14 Jacksonville team. But as Danny Trevathan roamed the press box in a camouflage jacket and jeans, at least five weeks away from practicing after being placed on IR with designation to return, Marshall manned the middle of the Broncos defense. A few new stars, a few old ones, and a few unexpected surprises are what has this defense second in defensive DVOA — and that was before it slowed down the second-best passing attack in football.

As the game wound down, the stadium video screen panned to Talib, dancing to “Jump Around” in a group of his teammates on the sideline. The crowd roared, just as Manning was about to take the field for the next offensive snap. After the play, Manning barked back toward the sideline, presumably at his defensive teammates for riling up the crowd as he needed them to quiet down. Manning deserves his quiet, but he should let his defensive guys have some fun. They’re what has turned the Broncos into the best team in football.