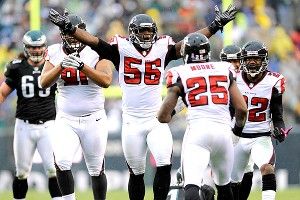 The Atlanta Falcons have an undefeated record going into Week 10. That is important. D-Block is more important.

D-Block is also a talk show, on the Internet, hosted by D-Block. Who is D-Block? The five-man linebacking corps of the Atlanta Falcons: no. 51 Robert James, no. 52 Akeem Dent, no. 53 Mike Peterson, no. 54 Stephen Nicholas, and no. 56 Sean Weatherspoon.

It’s the locker room equivalent of the cool-kids’ table in high school. It’s where everyone wants to be. The difference, however, from the highly cliquish, mean-spirited cool-kids’ table of years gone by, is that when it comes to D-Block, everyone is welcome. It doesn’t matter who you are in the Falcons organization. If you have proven yourself to be a team player, your voice will be heard on D-Block. Ringleader Peterson told defensive coordinator Mike Nolan, upon his arriving to chat, “Anytime you want to come and relax yourself, you know, get comfortable, grab you a Gatorade, come over here to D-Block.”

So it really is a place for everyone. Sometimes you get stars Julio Jones and Roddy White:

And other times, it’s a lesser-known young player like Kevin Cone, talking to D-Block about the Words With Friends hierarchy within the team:

It’s a fun atmosphere, but as with all great things, there are rules. As is articulated at the beginning of most episodes, by Peterson: “We keep it real, but we keep it clean. We love the kids on D-Block.”

Secondly, when you are a guest on D-Block — often referred to as “being blessed” — two things happen when you walk in. One, you will be given a crate to sit on, as shown by guest Tyson Clabo, a.k.a. “Big Money Clabo” (everyone gets a nickname on D-Block).

And secondly, you will be offered something to drink.

The drinks are always Gatorades, but usually they are referred to as “sodas.” Unclear.

Music has always been a major aspect of D-Block. It’s one of the many things that bring the Block together. The default song and intro track for D-Block is 2 Chainz’s “Crack (Instrumental).” Beyond that, the musical stylings are as diverse as the team. Sometimes it’s more folksy, as was the case last season when quarterback Matt Ryan brought his guitar and center Brett Romberg brought his vocals to D-Block Studios.

Did D-Block stand idly by while this performance took place? Nope. They, of course, sang background vocals (just “D-Block” over and over again) and then proceeded to dance while yelling at Matt Ryan to continue playing.

Other times, there are fewer performances and more special guests from the music industry, like the time DJ Drama made an appearance on the D-Block crates.

During this chat, Drama made note of the D-Block gear by asking, “Where’s my hat at, though?”

I briefly mentioned this earlier, but another way D-Block makes D-Block feel like a home away from home is by assigning nicknames. On the first episode of the second season, they welcomed new cornerback Asante Samuel to the team by bringing him to D-Block, blessing him (“We want to welcome you to Atlanta, but we also want to welcome you to D-block”), and talking about nicknames (among other things).

He alerted them that his nickname was “Dabba-Deuce,” but D-Block told him that when he’s on D-Block, they’re calling him “Dirty.” And then there was the “Brothers” episode, when they brought both Jacquizz and James Rodgers to D-Block.

“We actually got two brothers. Listen to that, D-Block — two brothers on the same team. So we gonna bring them in and bless ’em and let them tell us about this whole little relationship they got. THE RODGERS BROTHERS. LET’S GO. MISTER RODGER’S NEIGHBORHOOD. WELCOME TO D-BLOCK. POP QUIZZ. AND LITTLE ROG.”

Finally, when it comes to D-Block, all they’re really trying to do is blow off some steam on Friday, after a long week of practicing. They really just want to party. The introspective interviews and the free drinks and the nicknames and the coordinated outfits are what make D-Block special, but the degree of crunk at which they live their lives in that small space is what makes them the most entertaining collection of guys off the field in the National Football League. Sometimes they just want to dance to 2 Chainz, which is always the case with Sean Weatherspoon:

Sometimes they want to dress up and dance to “Thriller”:

And sometimes they like to open it up and have FREESTYLE FRIDAYS:

“Will Mo, straight from Missouri, but I still got my country grammar.”

“Ride around with my window tint like Obama man, that’s my president.”

And he didn’t curse, thus following D-Block rule no. 2: “Keeping it clean, because D-Block is for the kids.” Potentially, even better than the verse itself is the way he made his way onto the D-Block stage by coming out from behind his own shirt:

D-Block has every right to be in such great spirits. Their team has yet to lose. They’re playing great football on the field. But something tells me that, in some small way, this exhibition of off-the-field bonding is helping them on the field. D-Block is obsessed not only with each other, but with the team as a whole. And even though these silly clips seem like just that — silly — one can’t help but assume it’s incredible for team morale.

Oh, and one last thing about D-Block: The Pat Schiller Factor. Pat Schiller is no. 50 on the Falcons, and you’ve probably never heard of him. He’s on the practice squad, but he’s a linebacker. While not officially in D-Block, in classic D-Block fashion, they let him sit in on all of the sessions, with one caveat: He can’t move.

I love you, D-Block.