Deflategate is a mess. If you’re a Patriots fan (read: everyone in New England), you believe Tom Brady is being railroaded. If you hate the Patriots (read: everyone not in New England), coach Bill Belichick and his annoyingly perfect quarterback are finally getting what they deserve. No facts will dissuade either side from their passionately held views, which is fine. There are more questions than answers anyway: Did Brady conspire to deflate the balls? Did it make a difference? Did Brady lie? Why did he destroy his cell phone? Why did he have a Samsung Galaxy in the first place?

Those questions may never be answered, but one thing is clear: Tom Brady is very — and I mean very — bad at public relations. Brady’s situation is eerily familiar to anyone who works in politics. Deflategate is a classic “gate,” the kind that people in Washington have been dealing with for decades. Which means there is a playbook — tried and true crisis communication strategies that the Super Bowl MVP has not been considering. 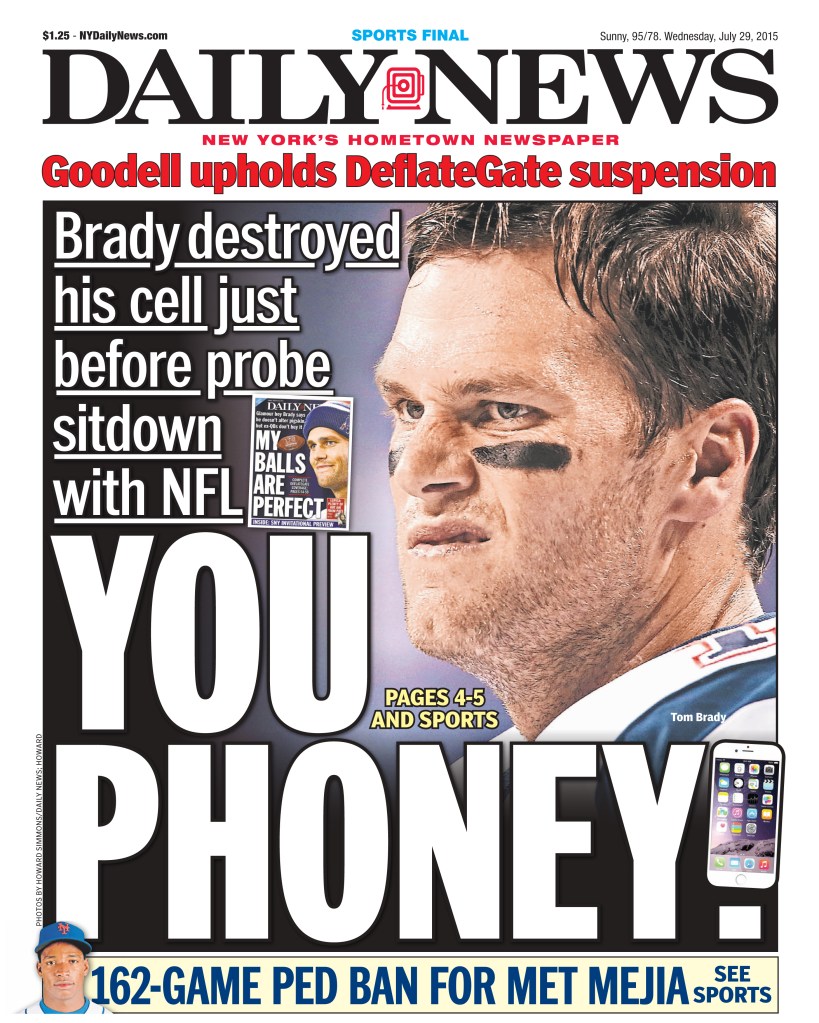 It’s kind of amazing that Brady is in this mess to begin with. Up until halftime of the AFC Championship Game, he had among the best-maintained public images in all of sports. But Brady’s response to Deflategate has been equal parts paralysis and pouting. His initial press conference before the Super Bowl was a disaster and his silence since then has allowed the NFL and his opponents to tell his story for him. For months, he has seemed so offended that anyone would question his integrity that he has refused to mount a defense.1 Now that Goodell has denied his appeal, Brady needs to get into gear and reclaim his public narrative. Here are the three strategies I have seen — and used — in countless crises in my eight years advising President Obama that Brady should consider now:

There is a case to be made that Brady wanted to stay silent to give Roger Goodell room to hear his appeal, but that would require putting a lot of undue faith in Goodell and his process.

1. Apologize: The press and your opponents are demanding a pound of flesh, so give it to them. One of the hardest things a political operative has to do is walk into the boss’s office and convince them that they have to apologize even when considering the misdeeds of their accusers and the utter unfairness of the press coverage. Someone should do that with Brady.

The classic way to apologize is to sit down for a long interview with a serious journalist. For Brady, that could be someone like Bob Costas or Jeremy Schaap. The interview has to be long enough, the journalist serious enough, and the apology contrite enough that Brady can say that all the questions have been answered and now he is going to focus full time on football. This strategy doesn’t demand that Brady be actually guilty of everything he has been accused of — and it doesn’t require that he admit to a crime he didn’t commit. He could apologize for his response and for not being more forthcoming. Sometimes giving the media beast what it wants is the only way to turn the page.

2. Laugh: If self-flagellation doesn’t work, try self-deprecation. Deflategate has been comedic fodder for months; Brady could embrace that by appearing on the late-night comedy shows (The Daily Show? Like, tomorrow?), or make a return appearance on Saturday Night Live (which comes back right as his suspension kicks in), or take a page from Republican presidential candidate Lindsey Graham and do something like this.

Brady has used humor before to make himself more likable — check his vaudeville act on SNL. The humor strategy works best for those who feel so wronged that they refuse to apologize (or are unable or unwilling to fake it), and based on his Facebook post, Brady seems to fall into that category.

3. Attack: The final and most often used scandal response strategy is attack, attack, attack. Brady has basically been letting the NFL, the Colts, his critics, and the press pummel him till they exhaust themselves. Now is the time to start punching back. If you’re tired of being the bad guy, find someone else to play that role. And could Brady ask for a better foil than Roger Goodell? He’s as fundamentally unlikable as Brady is handsome, and given the NFL’s handling of the Ray Rice situation, Goodell’s credibility is very limited. Make Goodell — his record, his process — the issue; marshal your allies (and there will be plenty in a fight against the commissioner) and muddy the waters to the point that it becomes so messy that everyone moves on.

The rules of crisis communication are fairly simple: Get your story out fast and right, dictate the terms of debate, and look to move the focus on to something or someone else. Brady has done none of these things. He waited far too long — and the longer he waits the harder it will be to regain control of his public narrative. Adopting these strategies sooner rather than later will begin the process of turning this around. In football parlance, it’s the fourth quarter, Brady is down, the clock is ticking, and he has to decide: Is he playing the Seahawks or the Giants?