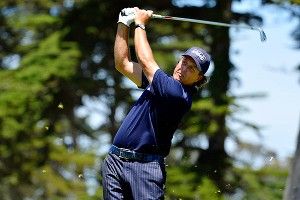 If you were like me this past weekend, you went through a dozen batteries in your remote switching back and forth between various sporting events. On Sunday, an avid sports fan/hopeless degenerate gambler had the chore of toggling between Euro 2012, the NBA Finals, Major League Baseball, and the U.S. Open.

Hypothetically speaking (I wish to God this was hypothetical), with a jammed sports slate it could become very difficult to keep track of your four-team Sunday parlay consisting of (1) NO goal in the first 15 minutes of Germany-Denmark, (2) Red Sox over Cubs, (3) largest lead under 15 in Heat vs. Thunder, and (4) Mickelson under 72 in the fourth round of the U.S. Open. Even more disturbing than the fact that I lost or even thought up that parlay (thanks to Lefty shooting like he was a righty) was the tradition I became reacquainted with when I checked in on the golf.

That being … players keeping their own score. Is this weird to anybody else? I’ve known about it for years but it just dawned on me that golfers ARE ACTUALLY REQUIRED TO KEEP THEIR OWN SCORE. And if they screw up their score — even if by accident — they’re disqualified. And if they mistakenly add strokes to their card — they must keep those strokes.

What the eff is the point of this? My television screen is shrunk to 1/10th of its actual size because golf scores are flying in at all different angles. Why do we need a pro to potentially jeopardize his stellar round because of a brain fart? (See Roberto De Vicenzo at the ’68 Masters and others.)

And couldn’t this possibly create a disastrous melee where caddies are looking to steal other golfers’ scorecards so they can mark them incorrectly? That’s how I would operate.

The counterargument is that golf is great because everyone — regardless of the level of competition — plays by the same rules with the same equipment. Whether you’re Webb Simpson in San Francisco or O.J. Simpson in San Quentin (or wherever he’s locked up) — it’s all played the same way. To that I say (until the pros are allowed to putt while shot-gunning a Sam Adams that’s been repeatedly smashed on their head) we can do away with the stupid keeping-score rule.

This is the most asinine of all sports traditions in my opinion, but it got me thinking of some other sports customs I could do with out. In no particular order, here are the ones that bug me the most:

NBA players shaking hands after their first free throw — whether it’s made or missed
This infuriates me. Guys going for high fives before they even see if their foul shot went in. Hit or miss they want kudos. The $17 million a year isn’t enough — if I barely graze the rim on a front-end foul shot, I demand my props. This is NOT how our parents raised us. Not mine anyway.

Boxers touching gloves to start the fight and before the final round
The average fan would love to create the illusion that these fighters hate each other. We don’t need to see them touching gloves or hugging or French-kissing during or after the match. Everyone should be like Clubber Lang — nose to nose — smashing your opponent’s gloves down when you’re told to touch ‘em up. And if you can — just for fun — cause his trainer to have a massive heart attack before the fight.

Pie in the face after walk-off home runs
This bothers me mostly because for a while it seemed like only Yankees (namely Nick Swisher and A.J. Burnett before him) engaged in this activity. Pinstripers celebrating is enough to make you swear off pie and single-handedly cure this country’s obesity epidemic. (True story — as I wrote this, I saw the clip of my Miracle Mets’ R.A. Dickey get pied by a teammate after his one-hitter. Forget everything I said — I love it!)

Not talking about a no-hitter for fear that you’ll jinx it
I wrote an entire blog post on this back in April. Never in my life have I felt such vindication for such a preposterous notion.

Silence during tennis and golf
This one always killed me. Especially in golf. Why should you be afforded extra concentration to hit a ball that’s not even moving? And how come we don’t extend the same courtesy to the poor bastard boxer who is trying desperately to listen over the crowd’s taunting to his trainer who is giving him advice as to how not to become brain dead?

Outrageous music played during NBA timeouts
I don’t know who decided it was necessary for basketball arenas to hire strip club DJs to fill the dead air, but I for one could do without the extended version of “Everybody Clap Your Hands.” Especially when it extends into the third overtime.

Extra equipment on the playing surface
Let’s start with the rosin bag on top of the pitcher’s mound. Aesthetically speaking, it’s a mess. And why rosin anyway? Are these athletes or violinists? Rosin bag! I prefer to use the term as a baseball slur. “Can you believe the pitching coach refused to sign my glove? What a total rosin bag!” I’m telling you — it’s got legs.

Similarly — do hockey goalies really need a water bottle on the back of the net? Why do they even need water? Should we stack up a port-o-potty as well? They’re standing … on ice. If they need to take a rinse — summon a teammate before he goes on a line change. “Hey, Claude — they took my bottle — on your way back you want to hook me up with a Aquafina? Much appreciated.”

Tennis players carrying extra balls during the game
This one’s a head-scratcher. I can understand why a clown carries extra balloons — because nine times out of 10, there are no miniature clowns at his feet to assist him. But in tennis there are ball boys and girls strategically placed 6 feet away who could help out. And yet, tennis players still insist on playing with bulging pockets. Imagine if the pitcher had to carry his own balls. “That’s OK, ump — hold onto that one. I have an extra ball hidden in my jockstrap.” The analogy becomes even more absurd when related to bowling.

Baseball managers wearing uniforms
Now that we have the visual of what it would be like if 65-year-olds went trick-or-treating for sunflower seeds and chewing tobacco, can we put them back in suits?

Injured basketball players wearing suits
Big & Tall men store proprietors are not gonna like this, but this one’s gotta go. The only thing more frustrating than knowing your favorite player is injured is the constant reminder that he’s more stylish than you. Also — an arrogant message is being sent. That message being — “I’m hobbling over to the strip club immediately after this game and I want everyone to know about it.”

Playing out the intentional walk
Basically we have to endure this formality because every 75,000 games when a right-handed hitter is receiving a free pass a guy steals home. You want to cut down on the interminable four-hour baseball games — start by getting rid of this ritual.

Winning coach gets the Gatorade bath
This one never made sense to me. You douse your own coach with several gallons of chilled liquid after a game. He won, right? This should be incentive not to lose. I propose that the losing coach gets the Gatorade bath — with a vial of mononucleosis added in. If nothing else this should cut down on the litany of clock management errors.

Going over the rules in boxing
Does the referee really need to reiterate the rules these guys have been following since they began boxing at 4½ years old? Hold on a second — so under your watch there’s no hitting below the belt or in the kidneys and when you say stop we stop? What a bizarre concept! I thought for sure this time we’d mix it up and I’d get extra points for slugging my opponent in the balls.

Bassmaster Classic winner is forced to have sex with the biggest fish they catch
All right — now I’m making these up. Time to end the blog post and brush up on my vuvuzela-blowing techniques while doing the wave.