Antawn Jamison has never been to the conference finals. He’s been open about his desire to get there. In the last two offseasons, Jamison has signed a pair of relatively cheap contracts in hopes of advancing deep into the NBA playoffs. Last season he went to the Lakers, and that didn’t work out. This season he moves across the hall to the Clippers. If it’s true that Jamison just wants to end his career playing for a competitor, this move could easily be read as the latest sign of an ongoing power shift within Staples Center.

Jamison had an awful season last year. He publicly disagreed with coach Mike D’Antoni over his playing time and put up the lowest numbers of his career in several categories, including points, rebounds, and assists. To add injury to insult, Jamison hurt his wrist in late March and was forced to play the remainder of the season in pain.

It’s hard to judge what Jamison is bringing to the Clippers. On one hand, his poor performance last season could be blamed on that infamously rigid D’Antoni “system” that’s unable to accommodate “unusual” basketball talents like Carmelo Anthony, Dwight Howard, and Pau Gasol. On the other hand, maybe Jamison is just old and past his prime. He is 37 and made his NBA debut last century. He’s had a productive career, but there’s no question his best years are gone now.

As a scorer, Jamison is much less aggressive than he used to be, which is typical of aging NBA players. Last season, more than 40 percent of his shots came from beyond the arc. During his recent run in Cleveland, that number was only 27 percent. Furthermore, Jamison also set a career-low in field goal attempts per 40 minutes last season. Although his overall field goal percentage spiked last season with the Lakers, this has more to do with his shooting fewer 2-point jumpers than it does with any improvement in his shooting accuracy. In fact, Jamison hardly shot any long 2s last year — he attempted only 1.3 per 40 minutes, down from 4.9 only one year before, a stunning depletion.

The bottom line is that the current incarnation of Jamison is pretty much a 3-and-D guy without the D. His shot chart resembles that of Shane Battier or Martell Webster, with lots of distance shooting and activity close to the basket, while the midrange cupboard is bare — something that has never been the case with him. 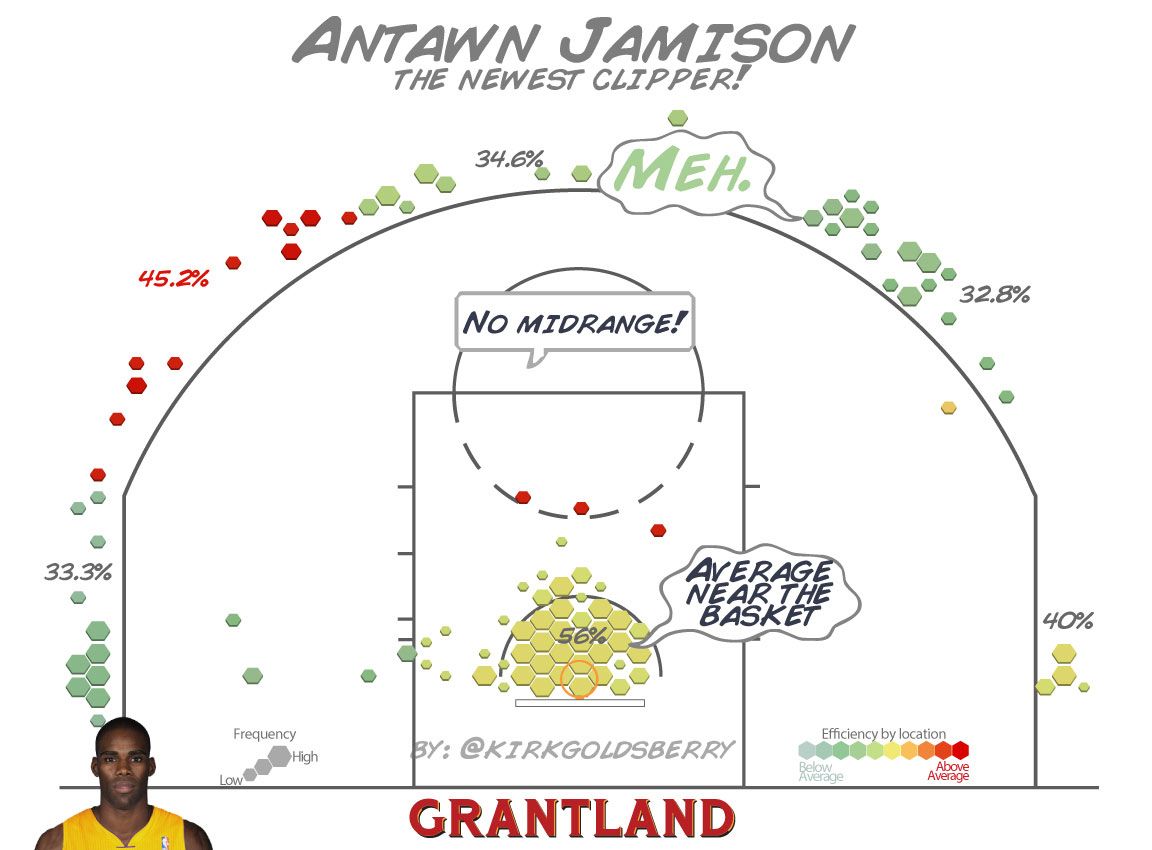 While skeptics clearly have enough ammunition to downplay Jamison’s potential impact in Clipperland, Clips fans can still be hopeful that he can make a meaningful bench contribution to his new team. It’s fair to assume that he will be happier with Doc Rivers than he was with Mike D’Antoni, and it’s probably also fair to imagine he’ll find a more compatible role with the Clippers as well.