On February 5 in Brooklyn, the Lakers and Nets were tied at 80 with about 2:50 left in the fourth quarter. The Lakers had the ball with seven seconds on the shot clock. Kobe Bryant had isolated on Gerald Wallace, 30 feet from the rim, beyond the left wing. Bryant crossed the ball over to his left hand and quickly went through his legs back to his right. He stuttered and accelerated to his right toward the paint. The attack consisted of two short dribbles and a few quickened strides. He elevated just outside the restricted area. Kris Humphries, the Nets’ 6-foot-9, 235-pound power forward who would turn 28 the next day, awaited. Bryant was not deterred. With Gerald Wallace right on his heels and Humphries helping, the graying Mamba leaped and dunked hard on both men to make the score 82-80. In this one play Kobe changed the mood on the floor and in the arena. The Nets would score only three more points; the Lakers went on to win 92-83.

Since February 1, the Lakers are 13-5 and bear little resemblance to the bumbling mess that went 5-11 in January. Although they still may not be championship contenders, they’ve been one of the better teams in the Western Conference of late, and as the Utah Jazz continue to traipse toward an early vacation, it’s looking more and more likely that the Lakers’ season will extend into the playoffs. Like it or not, the Lakers are surging, and like it or not Kobe Bryant is very relevant once again.

This is an impressive run for Bryant. Over his past 10 games, he is averaging 32 points, seven assists, and six rebounds while shooting over 53 percent from the field. The Lakers are 8-2 during this stretch, and Kobe was just named Western Conference Player of the Week.

From an offensive perspective, Kobe is a better player than he was last season. Last year Kobe shot 43 percent from the field; this year he’s shooting 48 percent. This is a significant improvement, and as I frequently point out, these kinds of changes in field goal percentage usually have less to do with changes in shooting ability and more to do with changes in shot selection. This is certainly the case with Kobe — the biggest changes in his game since last season are a marked decrease in midrange shooting and a corresponding increase in close-range shooting. Last year, the lion’s share (55 percent) of Kobe’s shots came from the midrange, while only 24 percent came close to the basket. 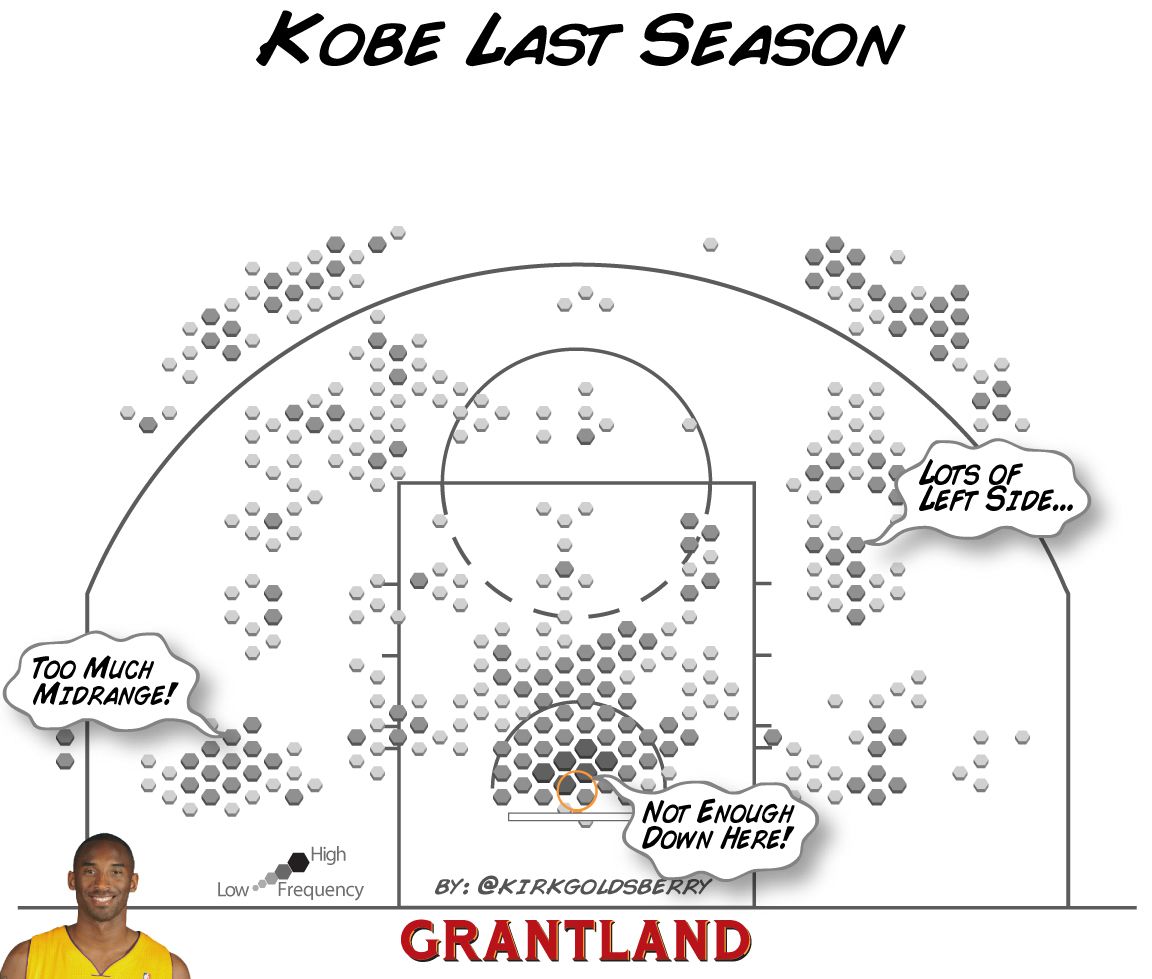 This season his midrange activity accounts for only 40.2 percent of his shooting, while his close-range attempts account for 34.2 percent; he’s settling for midrange jumpers less, while attacking the rim more. 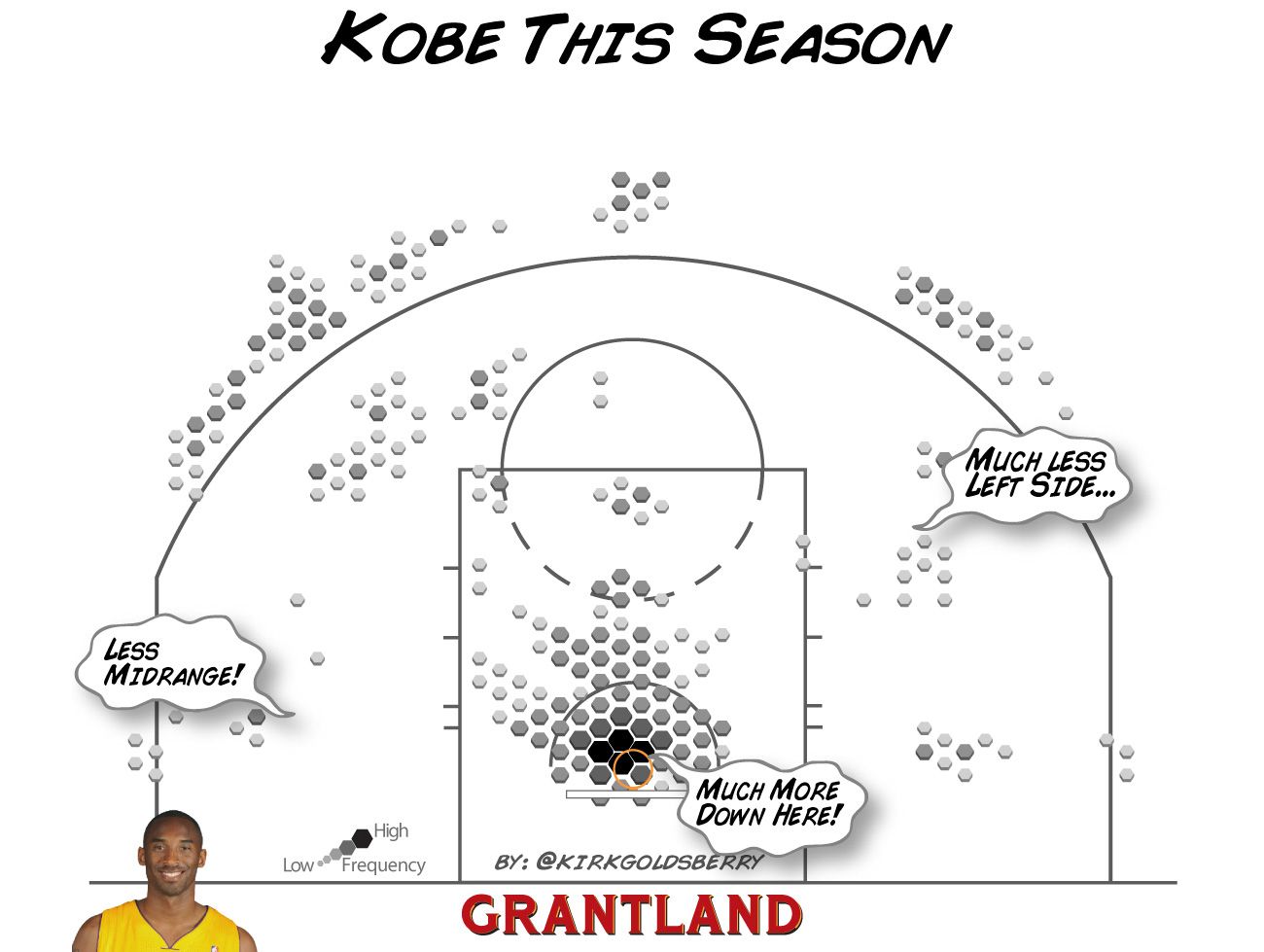 As you can see, many of Kobe’s midrange shot clusters have either diminished or disappeared altogether. Don’t get me wrong; Kobe still loves the midrange jumper, but this love affair is a bit less torrid than it was a year ago.

For years Bryant’s shot chart wasn’t very interesting. There wasn’t much to glean from it other than Kobe shoots a lot from everywhere, and he shoots pretty much at league average. His skill was the ability to get a decent shot anytime he wanted. Bryant used to be the least finicky shooter in the league, but this is no longer the case. Contemporary Bryant’s charts feature clear clusters of activity and newfound asymmetry. Whereas in past seasons his shots have been equally distributed on both sides, Kobe is more of a right-side player this season. His favorite 3-point shot is clearly that right wing shot, and his favorite midrange shot is obviously near the right elbow.

Kobe is also more efficient. It’s not as if he was bad last year, but he was an average or below-average shooter in many of his most active spots. He especially struggled from beyond the arc along both wings. 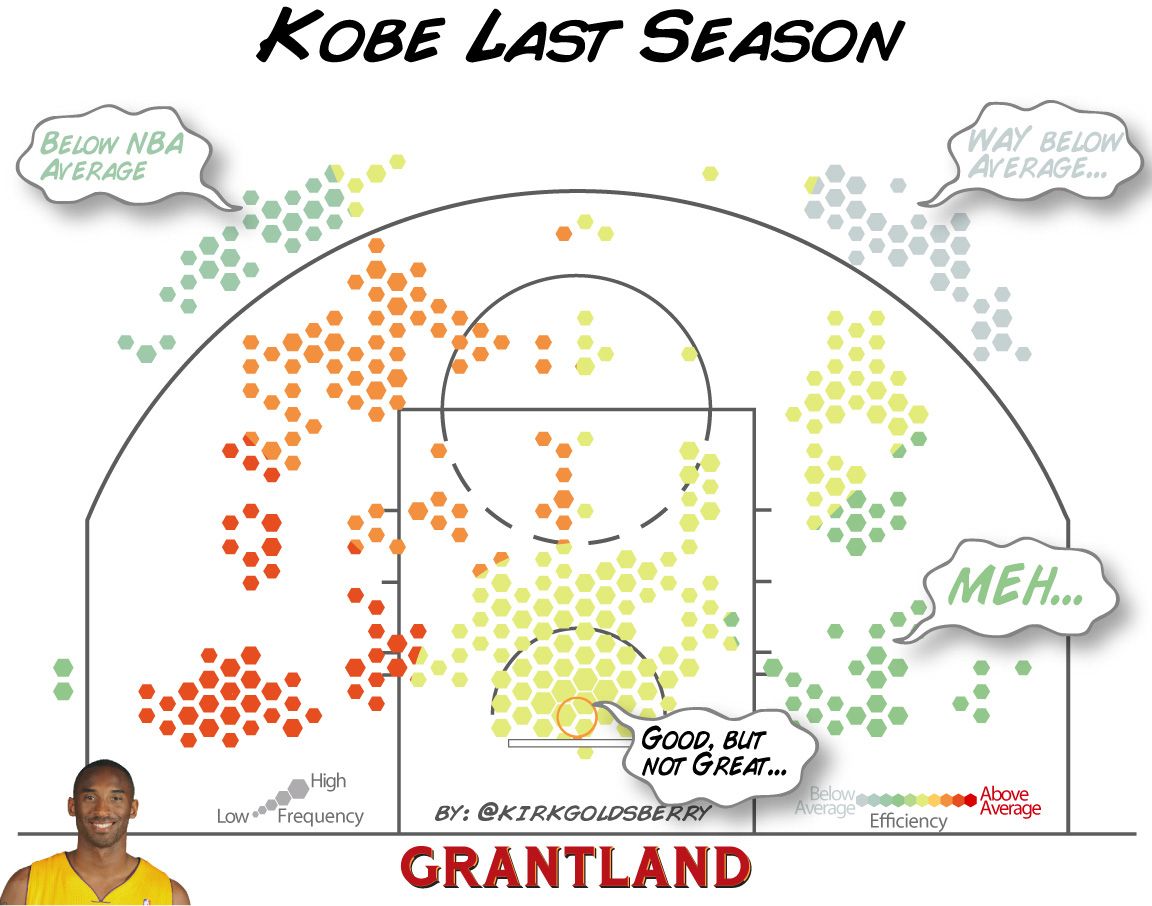 Last season Bryant shot a forgettable 55.3 percent near the basket, which is only marginally above the league’s average. This season that number has climbed to 60.1 percent. He’s getting close-range shots more frequently, and he’s making them at higher rates. He’s also shooting better from 3-point range, where his efficiency has also increased by 4 percent. 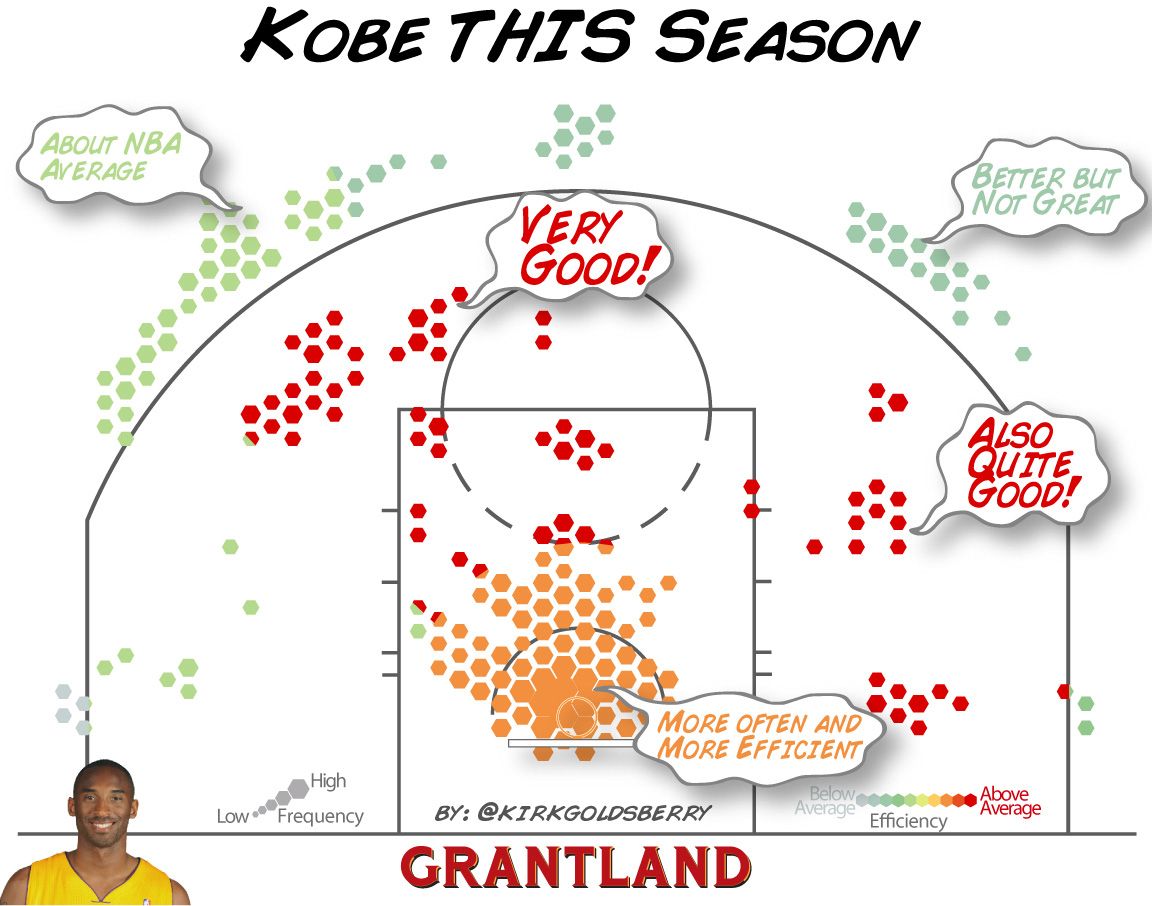 Bryant’s improved his shooting almost everywhere on the court, but the most important changes are definitely near the basket and in the midrange, where sometimes the best shot is no shot at all.

The structure of Bryant’s game has changed. It’s more concentrated and it’s more aggressive. By reducing the midrange shots and increasing his at-rim activity, he has improved his overall scoring efficiency. Does this mean Graying Mamba has one more run in him? Maybe, maybe not, but the way he’s going, it looks like he might. Kobe is famous for his work ethic, but is less famous for his high basketball IQ and his ability to adapt and change his game according to the needs of his team and the lessening abilities of his aging body. The fact that he’s having this good of a season at age 34 is impressive, and the fact that he’s doing it amid this season’s Staples soap opera is astonishing. Whether this all translates into a deep playoff run remains to be seen, but I doubt many Western Conference foes will be excited to draw the Lakers in that first-round playoff series.