Less than 90 seconds into Monday’s Game 4 between the Bulls and Heat, something seemingly uneventful happened. Dwyane Wade had just received an entry pass down on the right block, where he was doubled by Nate Robinson and Carlos Boozer. Joakim Noah was also interested in stopping Wade, and he had strayed from Udonis Haslem to camp out alone at the crown of the restricted area. Suddenly, one of those non sequitur whistles sounded and play abruptly stopped.

Joakim Noah was called for defensive three seconds, which results in a technical foul. This call established early on that the refs were not going to tolerate Noah’s cheating toward the basket, thus denying the Bulls a vital tactical advantage.

Two of the best NBA nerds on Twitter had the following exchange:

@bkoremenos Going to really hurt him if they call it like that.

Regardless of whether it was a quick count or not, the call happened and Noah would have to “stay honest” the rest of the way. Noah’s presence near the basket is critical for the Bulls defense, a fact that is well known by Erik Spoelstra, Chris Bosh, Udonis Haslem, and the rest of the Miami Heat.

There’s a lot of talk about “spacing” in the NBA these days, but what that actually means remains ambiguous. It’s clearly a concept having to do with offensive feng shui, but beyond that when somebody says this team had “good spacing” or that team “spaces the floor well” it’s kind of an imprecise compliment. With that out of the way, let me say this: The Miami Heat space the floor very well.

While it’s sensible to discuss spacing in terms of where offensive players are, in the case of Miami it is just as instructive to think about it in terms of where they are not. The Heat adorn the perimeter with terrifying spot-up shooters, including Ray Allen and Shane Battier. This always stretches the opposing defense across the width of the scoring area, creating space inside. However, the role of Chris Bosh as a midrange spacing agent is also a huge element. The 6-foot-11 Bosh is commonly guarded by the largest opposing defender, and spends a lot of his time on offense away from the basket, outside the paint, beyond the elbows. In short, Bosh is positioned in spots that do not hinder his attacking teammates.

The combination of Bosh’s size and shooting prowess create a gravity that pulls opposing bigs like Noah or Larry Sanders away from their native defensive habitat, out to zones where they are much less dominant. But perhaps most important, this gravitational pull opens up corridors for the Heat’s two primary offensive forces: Dwyane Wade and LeBron James. Here’s a classic example of Bosh Gravity from Game 4 a few minutes after that defensive three seconds call.

As James handled the ball along the right wing, Bosh slowly moonwalked down on the left baseline toward the corner. James attacked the basket, easily getting by Jimmy Butler and arriving at the rim before Noah, who’d followed Bosh, could contest. By rule (defensive three seconds), Noah is forced to either stay out of the lane or be actively manning an opponent.

Keeping Bosh away from the basket doesn’t cost Miami much on offense, but it does often cost their opponent something significant on defense. In this next example, Bosh again draws Noah far away from the lane, and sets up a hockey assist for James, who easily scores around Butler on the right block.

Opponents follow Bosh deep into jump-shooting territory for good reason; he is perhaps the most underrated midrange shooter in the NBA. Well over half of his shot attempts come in the midrange area, and he makes 48 percent of them, about 10 percent higher than the league average. He’s particularly lethal behind the elbows, where he performs at levels akin to Kevin Garnett and Tim Duncan, two surefire Hall of Famers who have a similar affinity for that exact scoring space. 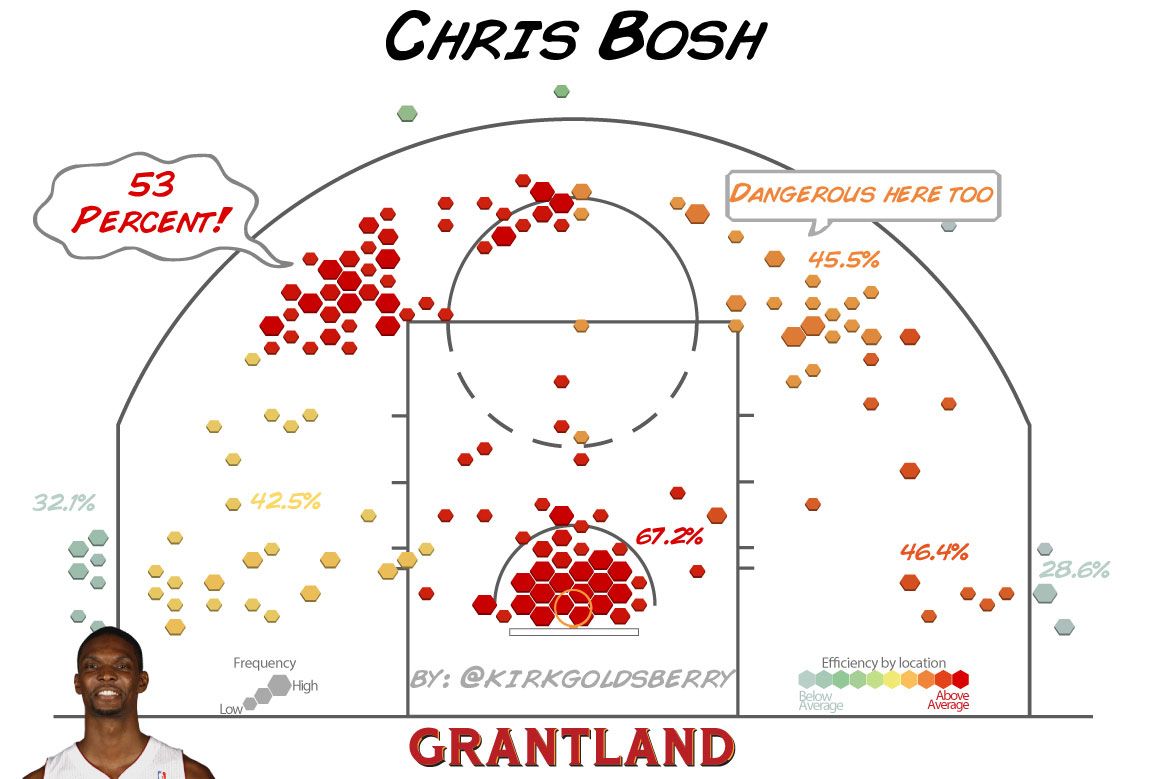 In the current series he’s serving as both a catch-and-shoot threat and as a Noah magnet that compromises the ideal shape of the Chicago defense. In turn, Bosh is providing several “spatial assists” and creating lots of more accessible scoring opportunities for his teammates near the basket. As if James and Wade needed any additional assistance near the hoop, Bosh’s abilities as a shooter regularly force the opposition’s most imposing defensive players to migrate far from the basket. NBA highlights packages won’t be featuring Bosh’s spacing anytime soon, but it is often the hidden cause in many of the Heat’s most spectacular plays.