On Tuesday, Baltimore general manager Ozzie Newsome provided some strikingly honest thoughts about Pernell McPhee, the Ravens’ half-lineman, half-linebacker who figures to be one of the more intriguing free-agency cases over the next month. “I think you have to look at it this way: If we were to go after the market on Pernell, how many other players would we not have on the Baltimore Ravens?” Newsome said. “That’s kind of the way we look at this thing.”

After recording 7.5 sacks for Baltimore last year, and with his ability to slot in spots all across a defense, McPhee is reportedly looking for a deal in the range of $8 million to $10 million. Now firmly entrenched with Joe Flacco’s new contract, the Ravens are already up against the cap, and keeping McPhee at that price just isn’t going to happen. He’s likely to sign with a cash-loaded team like the Indianapolis Colts. Given the NFL’s compensatory draft pick rules, that’s just what the Ravens want. 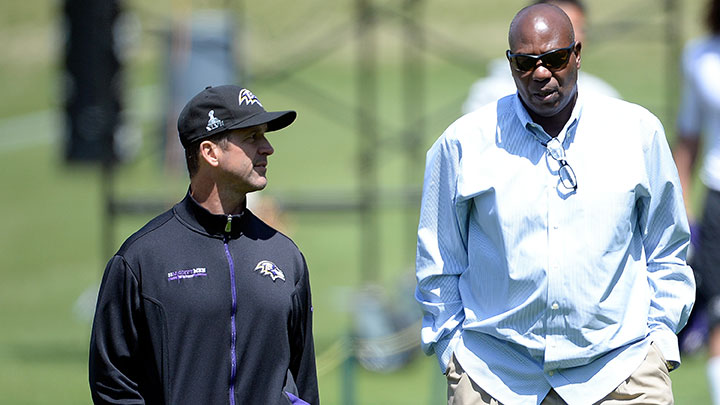 To explain, let’s quickly go back to the spring of 2010, when Baltimore lost a bunch of players to the free-agent market. Most notably, Derrick Mason left for the New York Jets and Dwan Edwards headed to the Buffalo Bills. Each year, after the conclusion of free agency, the league surveys what a team gained and lost in the market, and based on the league’s own formula, it awards teams with net-loss compensatory draft picks in the following year’s draft. The Ravens were handed two in 2011, both in the fifth round. One was Pernell McPhee.

Since the league started its compensatory picks system in the mid-’90s, no team has earned more than Baltimore’s 41 — and that number will only go up. Last year, Baltimore’s strategy in free agency was perfectly tailored to maximize the number of compensatory picks it would get in this year’s draft. Arthur Jones signed a healthy contract with Indianapolis, Michael Oher left for Tennessee, and Corey Graham landed in Buffalo. To fill out its roster, the Ravens signed players, like Steve Smith, who don’t count against the picks formula because they were cut by their former team. According to Over the Cap’s projections, that should mean an extra fourth-, fifth-, sixth-, and seventh-round pick for Baltimore come this spring’s draft.

Newsome and assistant GM Eric DeCosta did the same thing the year before. Elvis Dumervil was also in Smith’s situation, technically released by the Broncos after the fax-machine snafu. Daryl Smith was signed so late in the free-agency process in 2013 that he didn’t factor in the league’s compensatory equation either. Baltimore let Paul Kruger, Dannell Ellerbe, Cary Williams, and Ed Reed walk, and — taking all of that into account — they gained a third-round pick, two fourth-round picks, and a fifth-round pick. In this case, the slew of extra midround picks was important because the Ravens had given away a fourth- and fifth-rounder to Jacksonville in the trade for Eugene Monroe; of course, they knew those extra picks would be coming. 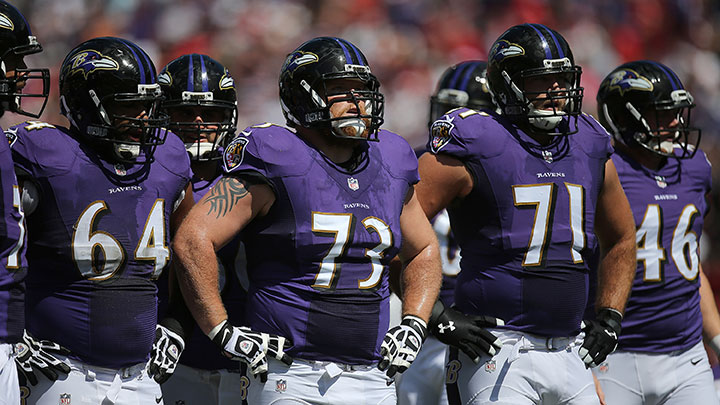 Hauling in a handful of compensatory picks each year brings two main benefits.

The first is obvious: You get more swings at the draft. As Bill Barnwell wrote about Bill Belichick before this year’s Super Bowl, one of the main advantages to the Patriots trading down so often is that they simply give themselves more chances at finding key contributors. Baltimore has hit with players like McPhee and, now more importantly, Ricky Wagner. The Ravens drafted Wagner with a fifth-round compensatory pick in 2013, their second of four that year, after losing guys like Ben Grubbs, Jarret Johnson, and Cory Redding in free agency in 2012. In his second season, Wagner was among the best right tackles in football and now stands as the ultimate example of how this strategy can pay off.

The other benefit is that it lets Baltimore be flexible and aggressive in the trade market. Knowing it would get picks back after losing Jones, Oher, and Graham last March probably made giving the Bucs a 2015 sixth-round pick for center Jeremy Zuttah a little easier. Sixty percent of Baltimore’s very good offensive line has come, directly or indirectly, from how it manages its free-agency strategy and the compensatory picks that come from it.

Newsome’s comments about McPhee may seem blunt or surprisingly honest, but that’s just how the Ravens work this time of year. Baltimore spent one of its extra fifth-round picks on McPhee four years ago, and by the time he was in the final year of his rookie contract, he was a central piece of the defense. All of McPhee’s production this past season has helped the Ravens twofold: He contributed to the eighth-best defense in football by DVOA, but he also pumped up his value in free agency.

Coming into the year, McPhee was an afterthought who’d played just 304 defensive snaps in 2013. Now, assuming the Ravens are relatively quiet in signing free agents, they’re going to get an extra third-round pick in next year’s draft based on McPhee’s upcoming deal. A third-rounder is far from a guarantee, but it’s another chance, and that’s what the Ravens keep giving themselves, year in and year out.