The best of the week …

Baylor QB Seth Russell and WR Corey Coleman. I’d be remiss if I didn’t mention Russell, who accounted for 540 total yards (380 passing, 160 rushing) and six touchdowns (five passing, one rushing) in the Bears’ 62–38 romp over West Virginia. The redshirt junior was accurate and surprisingly athletic against the Mountaineers and didn’t commit any major mistakes; as a team, Baylor eclipsed 300 yards passing and rushing for the fifth time in six games this season — read that part again — and in this one Russell was the catalyst on both counts.

But let’s get real here: The indisputable star of the show was Coleman, who hauled in 10 of Russell’s 20 completions and accounted for more than half (199 yards) of the Bears’ total production through the air. He also accounted for three touchdowns, giving him the single-season school record for receiving TDs (16) just halfway through the regular season. And aesthetically speaking, Coleman’s day looked even better in person than it did on paper.

That may be the first recorded moonwalk touchdown. And I don’t even know how to begin to describe this combination:

For the year, Coleman is averaging 21.4 yards per catch, easily the best of any player with more than 35 receptions; he’s posted at least 100 yards receiving in all six games with multiple touchdowns in each of the last five. So if you didn’t know his name before, you do now.

Michigan State DE Shilique Calhoun. At this point, Calhoun harassing Michigan quarterbacks is an annual tradition on par with the Paul Bunyan Trophy: With two takedowns of Jake Rudock in Saturday’s 27–23 win in Ann Arbor, Calhoun will end his MSU career with 5.5 total sacks against the Wolverines in three games, all Spartans victories. On top of the sacks, Calhoun was credited with 1.5 additional tackles for loss and a QB hurry while wearing no. 43 (in place of his usual no. 89) in honor of injured teammate Ed Davis.

Michigan State WR Aaron Burbridge vs. Michigan CB Jourdan Lewis. On the other side of the ball, Michigan left the assignment of covering the Big Ten’s best wideout almost exclusively in the hands of the Big Ten’s best cover corner, and the matchup lived up to the hype: Connor Cook targeted Burbridge on 19 of his 39 attempts, yielding nine completions for 132 yards,1 10 incompletions, and an astounding six pass breakups for Lewis in coverage. (For some context, only eight other Big Ten defenders have six PBUs for the entire season; Lewis himself started the day with eight, and ended it with the national lead.) Lewis also had seven tackles, including half a tackle for loss. “Jourdan, he’s a good player, we were out there battling,” Burbridge told reporters. “Every play was a battle. Every single play.”

Not every completion came against Lewis: Burbridge hauled in a 27-yard reception on the Spartans’ first series at the expense of Jarrod Wilson.

Alabama CB Minkah Fitzpatrick. In the spring, Alabama defensive backs introduced the Ball Out Belt, a WWE-style championship belt engraved “BALL OUT CHAMPION” that would reside with the DB that coaches feel helped create the most turnovers. On Saturday, the title wound up in the hands of a player who wasn’t even on campus this spring: Fitzpatrick, a true freshman, took not one but two interceptions to the house in the Crimson Tide’s 41–23 win over Texas A&M, becoming the first Bama player on record to take multiple picks back for touchdowns in the same game.

As a team, the Crimson Tide recorded four picks (three off sophomore Kyle Allen, one off true freshman Kyler Murray), took three of them back for touchdowns (Eddie Jackson added the third score), and set a school record with 207 interception return yards, most by an SEC defense since 1971. After finishing with a modest 11 interceptions in 2013 and 2014, Bama already has 12 picks in 2015, best in the SEC and tied for fifth-best nationally.

Oklahoma QB Baker Mayfield. The Texas Tech transfer was flawless against Kansas State, hitting 20 of 27 passes for 282 yards, five touchdowns, and zero turnovers in a 55–0 massacre in Manhattan, the most lopsided defeat of Bill Snyder’s entire K-State tenure. (When Bill Snyder says “all of us are embarrassed,” I feel like that includes all of us, like, as a human race.) For once, the program that bills itself as “Walk-On U” was on the bitter end of an underdog story: Mayfield began his career as a walk-on in Lubbock and won the job at Oklahoma after showing up in Norman last year more or less unannounced. This year, he’s averaging 340 total yards per game with 19 TD passes to just three interceptions.

Embracing the $5 Bits of Broken Chair Trophy. Last year, the Internet noticed the absence of a traveling trophy between newly minted Big Ten West “rivals” Nebraska and Minnesota and endeavored to fill the void. The result: The $5 Bits of Broken Chair Trophy, literally a trophy depicting a toppled chair with a gaping hole in it and two $5 bills taped to the underside. The grassroots totem made its way to the sideline of Minnesota’s 2014 upset in Lincoln, where mascot Goldy Gopher accepted it on behalf of the team (which presumably was unaware of its existence).

On Saturday, Nebraska’s 48–25 win in Minneapolis resulted in the first transfer of the $5 Bits of Broken Chair Trophy between schools — the mascots handled the handoff — and after suffering four last-second losses in their first six games, Cornhuskers players and coaches alike welcomed it into the winning locker room with glee.

.@SBNationCFB it's good to be back in Lincoln with some new furniture. #GBR pic.twitter.com/dp1404olic

Fat Guy of the Week

Alabama DL Jonathan Allen. While the secondary stole the show against Texas A&M, the front seven paved the way by holding the Aggies to just 32 yards on 1.3 per carry (including sacks). No one played a bigger role in that effort than Allen, a 6-foot-3, 283-pound end/tackle hybrid who was credited with four tackles for loss, two sacks, and a forced fumble in the onslaught. As a team, the Crimson Tide finished with six sacks, tying a Saban-era high against an SEC opponent.

Catch of the Year of the Week

Utah WR Kenneth Scott. Attention, all receivers who have ever blamed a routine drop on the rain: Kenneth Scott is shaking his head in disappointment at you right now.

Scott’s EDM mix is just a loop of Rod Gilmore saying “He makes a one-handed catch in the rain!” on repeat for a solid hour.

Honorable Mention: While this feature is generally limited to weekend action, Stanford’s Francis Owusu pulled in a no-look, Prothro-esque touchdown catch in last Thursday’s win over UCLA that has to be seen to be believed.

As awe-inspiring as Fournette’s raw speed is in the open field — prior to Saturday’s win over Florida, he’d broken a run covering at least 60 yards in four straight games — his most consistently impressive trait is his raw physicality at the end of more routine runs, when the tackler usually winds up getting the worst of it as he hangs on for dear life. Fournette didn’t have any breakaways in LSU’s 35–28 win over Florida (his long gain covered 25 yards), but he did pound out 180 yards and two touchdowns on a career-high 31 carries, with an emphasis on the pounding.

That’s a Cro-Magnon iso play out of a two-tight I-formation on third-and-4, which Fournette successfully converts and punctuates with a straight-up Deacon Jones head slap on the Gators’ Marcus Maye. LSU’s playbook may be straight out of 1983, but Fournette’s game translates in any era. 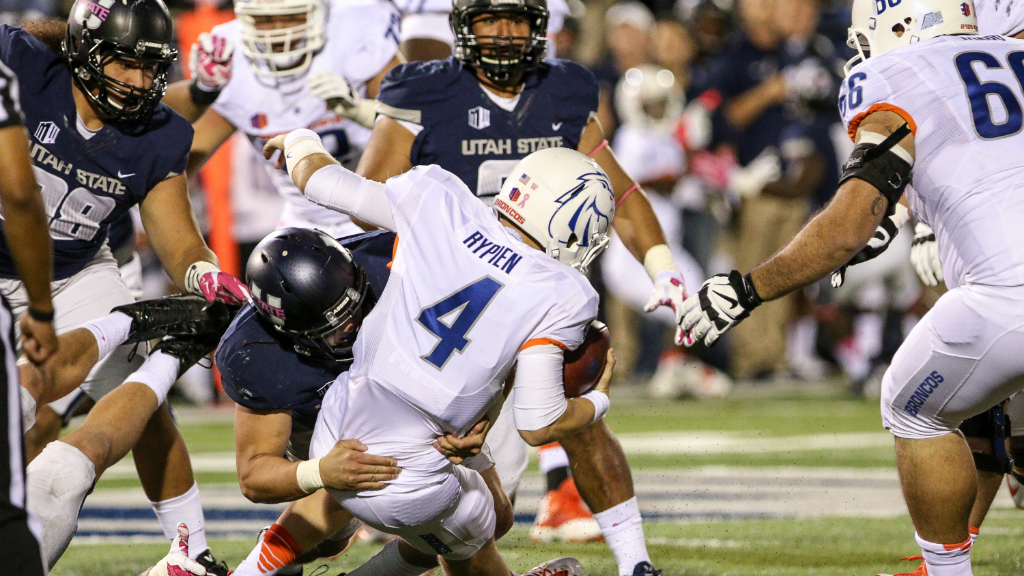 Utah’s Special Teams. The Utes are in the midst of a banner season, one that has featured spectacular plays in all phases (including in the return game). Then there was this:

That’s right: Clinging to a 14–13 lead against Arizona State in the third quarter, Utah return man Britain Covey fielded a kickoff 9 yards deep in his own end zone, jogged toward a perfunctory kneel-down, and proceeded to launch an inexplicable, illegal forward pass — the Utes were officially flagged for an illegal forward pass, in their own end zone, on a kickoff return — resulting in a go-ahead safety for ASU. (The safety was actually a result of the penalty rather than the recovery by Bubba Poole.) Also, Pac-12 refs don’t know the correct hand signal for safety.

“The plan was, I catch it deep, fake like I’m going to run up, stop right before the goal line and then throw a backwards pass to Bubba and he goes,” Covey told reporters. “It worked in practice. That was a really bad throw.”

The Utes also allowed a kickoff return for a touchdown (ASU’s only touchdown of the night) and a 48-yard punt return2 that set up a short field goal, making special teams directly responsible for 12 of the Sun Devils’ 18 points — none of which ultimately mattered following a 20–0 Utah surge in the fourth quarter.

Following a holding penalty on what would have been a more successful punt.

Boise State’s Ball Security. The 21st-ranked Broncos committed an astounding eight turnovers on Friday night in a very weird, 52–26 loss at Utah State, and as bad as that sounds, the reality was even worse: After opening with a field goal and a punt on its first two drives, Boise actually gave the ball away on eight of its next nine offensive possessions. 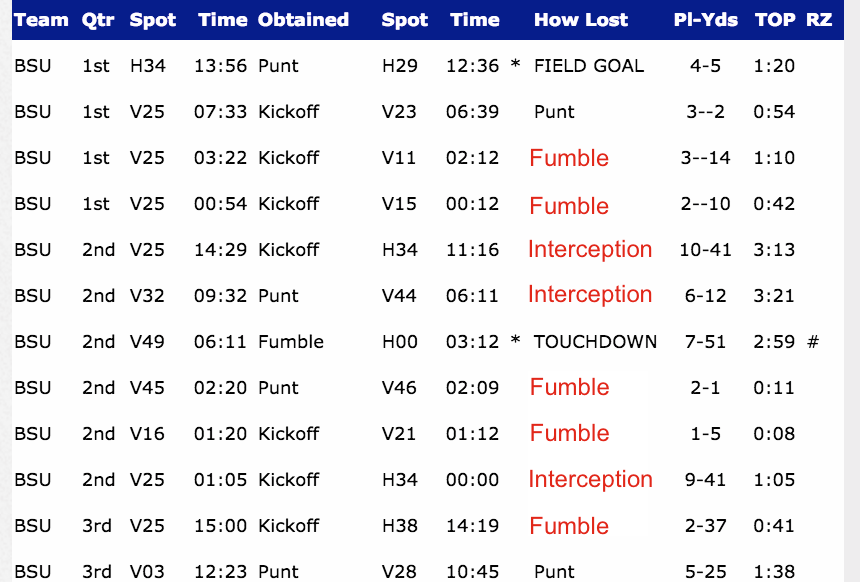 Only one of those giveaways resulted in a touchdown by the Utah State defense, but three others set up easy, short-field scores for the Aggies inside the BSU 25-yard line. By the time Boise stopped the bleeding in the third quarter, it trailed 45–10 and its season was in flames: With their second loss, the Broncos are almost certainly eliminated from contending for the automatic mid-major spot in a major bowl game, and with Utah State now sitting atop the Mountain West’s Mountain Division, they have a lot of ground to make up in their own conference as well.

Missouri’s Offense. Starting quarterback Maty Mauk remained suspended Saturday for a third consecutive game, and the offense has never looked worse: With true freshman Drew Lock at the controls and no ground game to speak of, the Tigers managed just 164 yards, six first downs, and two third-down conversions in an unwatchable, 9-6 loss at Georgia in which neither side managed a touchdown. Five of Mizzou’s 11 offensive possessions resulted in a three-and-out, and four others ended in a punt, turnover on downs, or missed field goal.

With three losses in their last four games, it’s safe to rule the Tigers out of another run at the SEC East crown, and if they’re committed to Lock the rest of the way, even a bottom-rung December bowl game isn’t assured. Per coach Gary Pinkel, at this point “‘sense of urgency’ would be an understatement.”