• Celestial recalibration of the week: [TILT]. Look, we’re not saying that the Week 1 rematch between Appalachian State and Michigan served as some kind of up-is-down, down-is-sideways trigger that has inadvertently kicked off a season of upsets and general wackiness the likes of which we haven’t seen since 2007. We’re just saying that it’s been seven years since the original meeting, and seven is kind of a witchy number. We’re saying we like harbingers, and asking whether, if you had some kind of seventh apocalyptic seal to crack open, you’d want the dusty voice issuing forth to say, “Boston College had 452 rushing yards1 against USC and made it look easy”?

And five sacks, and 16 tackles for loss.

• Week 3 player beatifications: Terry Williams, Josh Doctson, Marcus Mariota. We can’t get ahold of good footage of the body of work Williams put in for East Carolina against Virginia Tech on Saturday, for the same reason you can’t safely capture a hurricane on handheld camera: It’s too big and there’s too much of it. Impervious to holding and the laws of physics, the senior Pirates nose tackle has earned a new nickname, inspired by his previous opponents: Terry “Unsafe Weather Conditions” Williams. Perfect for a Pirate.

Doctson, a junior receiver for TCU, distinguished himself in Week 3 with good works in the community. Uninterested in the game, gentle lady? Does this help?

Mariota requires some parable-ing. Last week, in Oregon, we saw this surfboard leaning up against a fence. 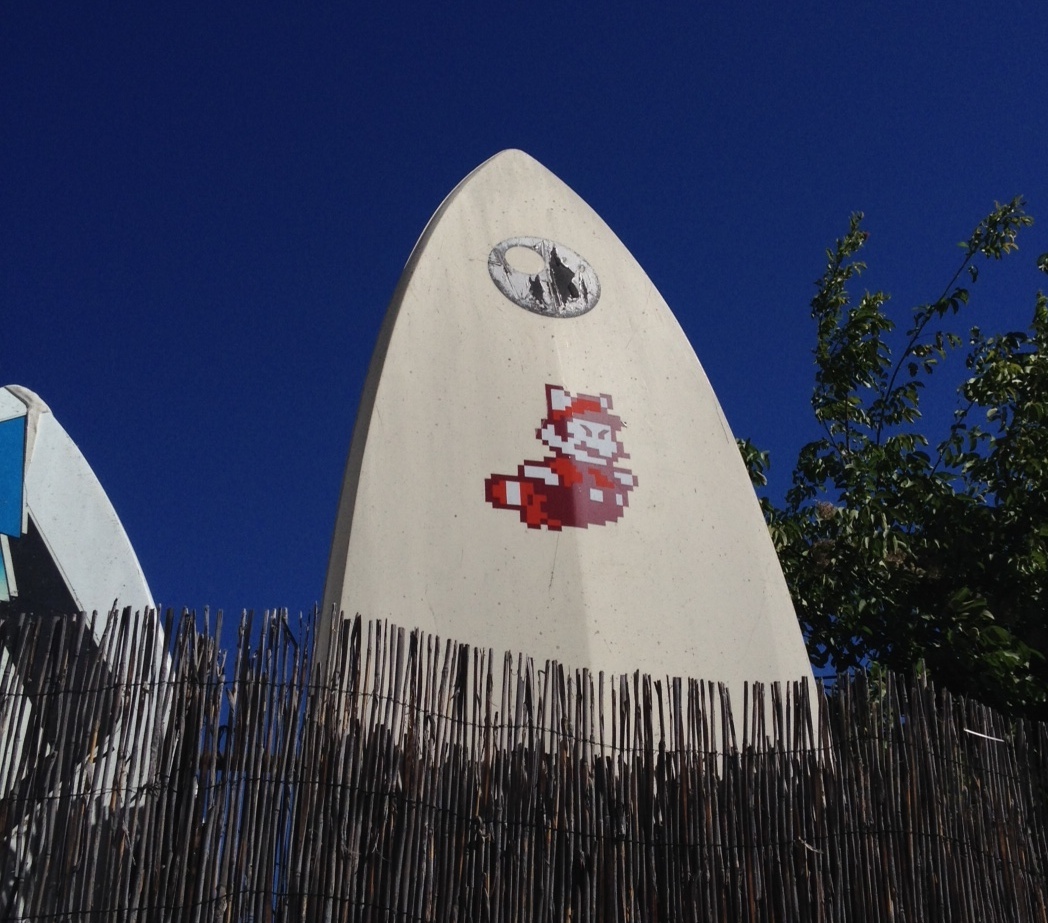 The moral of this story is that Marcus Mariota can fly.

• Week 3 coach beatifications: Steve Spurrier and Dana Holgorsen. If there’s a smirking statue at the entrance of this particular church, it bears the face of the Head Ball Coach, whose press conferences are a good 40 percent of the reason we enjoy our jobs, and who is never in finer form than after a noteworthy win. “Some wins are better than others,” he intoned after knocking off Georgia to tie Vince Dooley in SEC wins. “This one was better than most others. Eeeehhh, gosh, what a ballgame.” Here, watch the whole thing. It’s like drinking apple cider vinegar with garlic cloves in it, and just as heart healthy. (And speaking of hearts, should yours need blessing, take Spurrier’s words of encouragement to his own team: “I just told our guys, ‘If we can stop some guys on third down, we’re not that bad at defense, we’re really not.’”)

An evening of HBC bein’ HBC followed an afternoon of Holgo bein’ Holgo. Here’s a carefully selected passage from West Virginia’s postgame presser regarding his relationship with Josh Lambert, who kicked the last-second 47-yard field goal that gave the Mountaineers a three-point win over Maryland:

“I haven’t talked to Josh Lambert since he got on campus, and we are going to keep it that way. The one thing about Josh, he’s missed a couple this year but when he has missed he’s came back and made it up. He’s a guy that we have complete confidence in when it comes to making that shot. I know his name and who he is but other than that I’m doing the hands-off approach.” (Before you scold: Look who else respects the parts of the process that stay in their lanes!) Sing us off, Brad:

• GRAPE JOBS! Back to Vacation Bible School with the lot of you, who … well, you tried. We’re not saying that to make you feel better. You tried. That is a statement of fact. Kent State, show your work. Texas Tech, where is your rally fox? Texas, are you lost?

• Graven idol of the week: the imaginary Cy-Hawk Series trophy. In last week’s Viewing Guide, we passed over this game in favor of the Battle of I-10, and while it is delightful that a football team has once again been awarded a spittoon and a ghost shovel, the Iowa–Iowa State game deserves affection after featuring all of the following: an airshow, a winning score (sort of!) at the wire (sort of!), the public continuation of a municipal law-enforcement rivalry, and a shirtless photo session in the end zone that prompted the deployment of the dreaded “classy,” the ultimate burn barb of parties on the wrong damn end of the scoreboard:

It’s like David Ubben says: “Sometimes, a bunch of 300-lb dudes just gotta shed their shirts and take pictures with a trophy in the end zone of a bunch of dudes they hate.” A bronzed frieze of this photo should top the list of replacement options the next time both sides decide to reimagine the traveling trophy. With extra-special attention paid to detailing the stomach pelts.