That is the premise of this column.

Now that the Pelicans have parted ways with Monty Williams, 2015 has given us two of the most attractive coaching vacancies the NBA has seen in a very long time. One — in Oklahoma City — has already been filled by Billy Donovan, and the other will probably be filled sometime in the next few weeks. But which job is better?

At first I was ready to say New Orleans because of Kevin Durant’s free agency in 2016. Then I was ready to say Oklahoma City because it is the most talented team in the league. Then … well, you can look at this from a number of different angles.

Let’s talk through it. 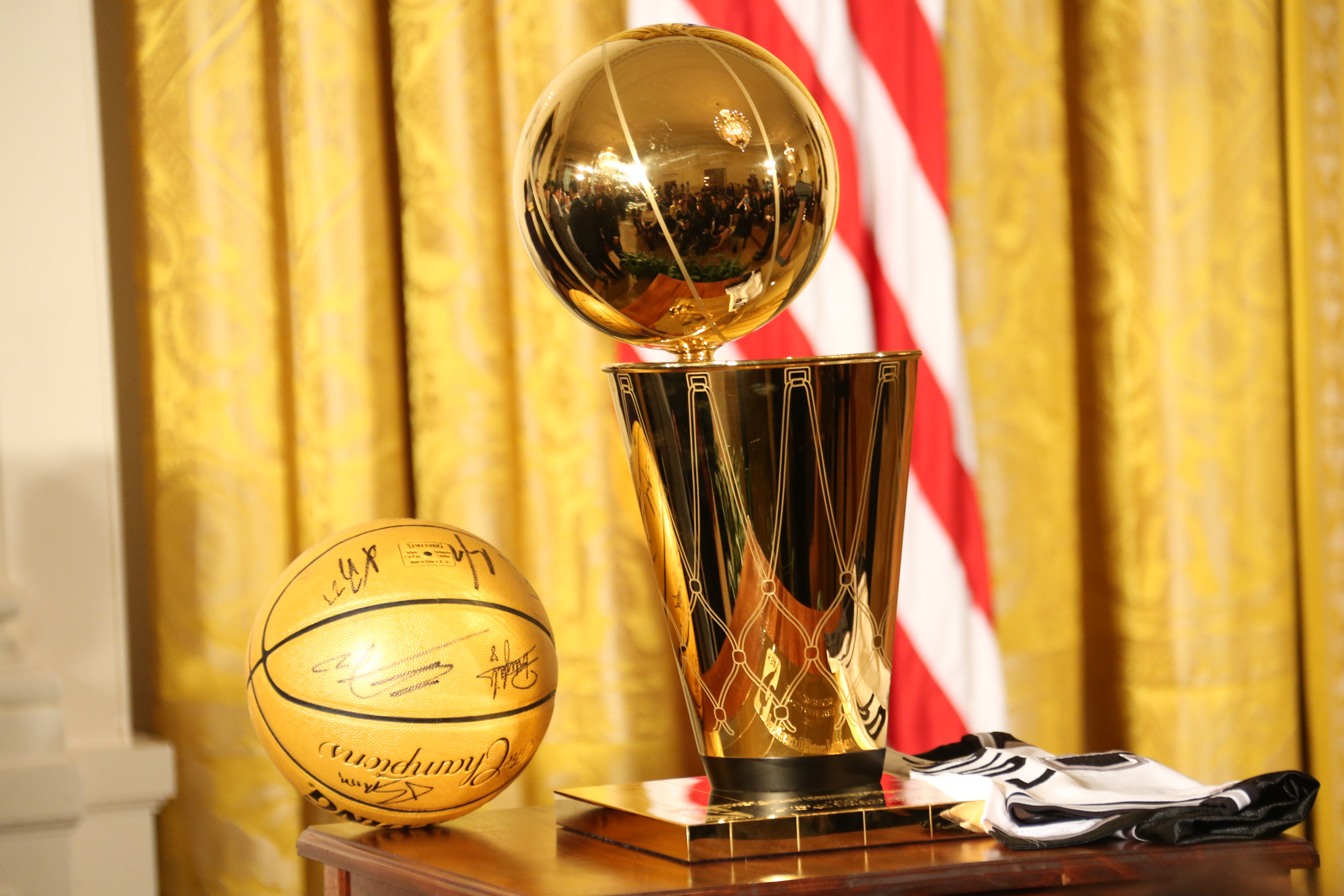 You want to win a title, right? That’s what every coach wants. This is easy. Taking over the Thunder means you’re walking into a team that would have been title favorites if they’d been healthy this year. They’ll probably be title favorites next year, too. Coaches spend their entire career trying to get an opportunity like this. In OKC, that’s what Donovan walks into on day one.

The Pelicans? Anthony Davis is good, but advanced stats — PER especially — exaggerate just how dominant he is right now. He’s not Jordan or Wilt. So while coaching the best young player in basketball is appealing, New Orleans is probably still a few years away from blowing people off the court. There’s also no guarantee it ever hits the top tier that OKC already occupies.

I started to call this a push, because they are both from a different planet and basically impossible to defend. But the risk of KD leaving and the long-term effect of that foot injury make it pretty tough to pretend this is even. Go back and watch Davis’s 20-point fourth quarter from Game 1 against the Warriors. Then be honest with yourself. There’s not a single superstar in the NBA you’d want to coach over Davis. 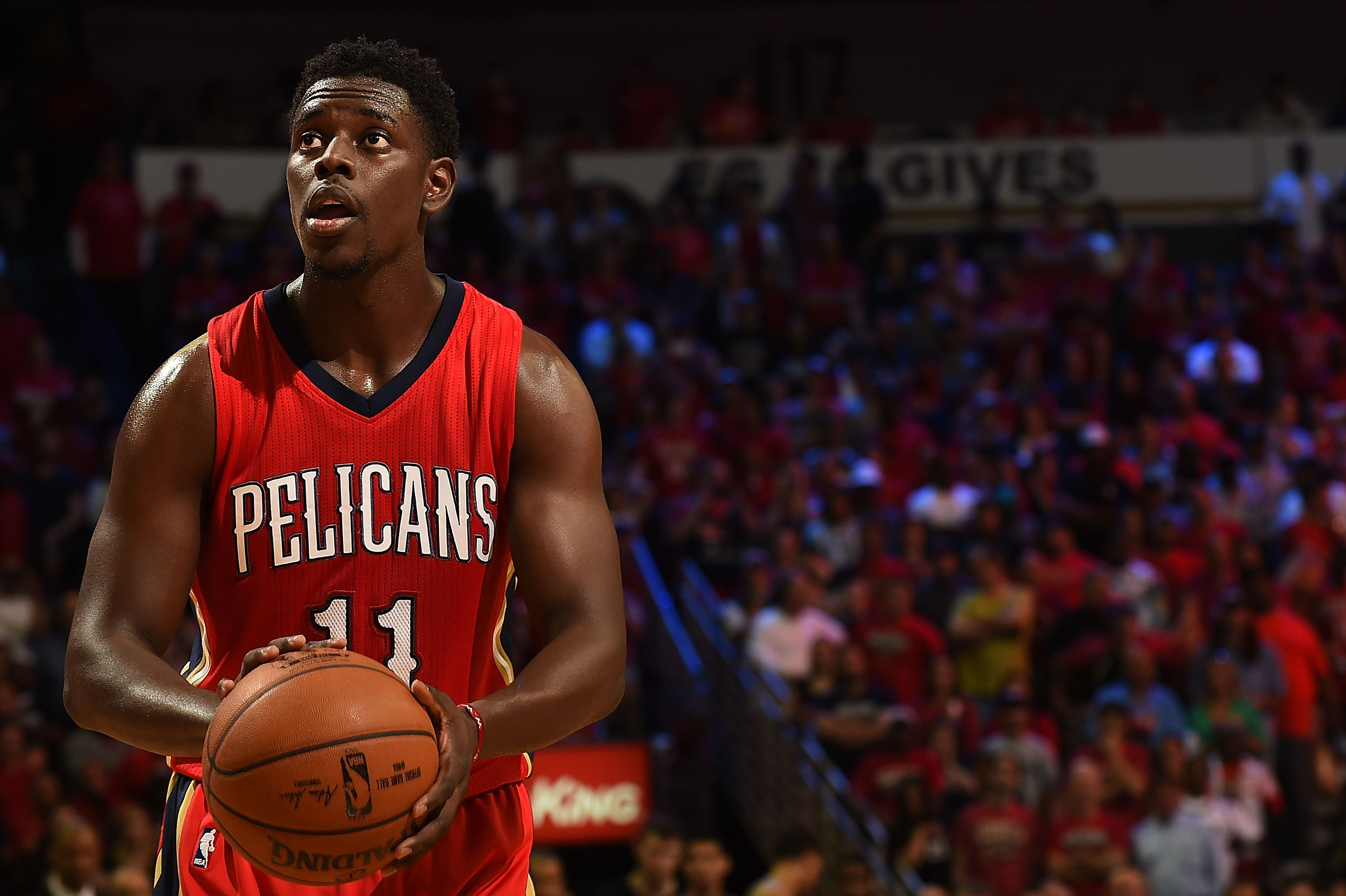 This is a big question, and it’s easy to overlook.

Both OKC and NOLA are small markets. Both are good enough to avoid the lottery, at least while they have their superstars. In that case, what are the odds either team adds another max-level superstar in the next five years? The major pieces you see now are probably close to what a coach will be working with for the foreseeable future.

In New Orleans: Davis will probably have to make do with Jrue Holiday. Even if the Pelicans can move Eric Gordon or Tyreke Evans, it’s hard to imagine flipping them for something that makes the team dramatically better. There will be cap space when the TV money kicks in, but we’ve still never seen superstars willingly seek out a market like New Orleans. Choosing the Pelicans job assumes Brow is so good that the other limitations won’t matter. That might be true. But look around the rest of the league: Every other title contender has a lot more firepower than one great superstar and a handful of solid role players.

People worry about Davis turning into LeBron on those pre-“Decision” Cavs teams, but at least LeBron was in the East. The better comparison is probably Kevin Garnett on the Timberwolves, especially since Brow will need solid guards to make his life easier. There’s no guarantee the Pelicans can ever get that firepower — their best bet might be hoping Holiday turns into Mike Conley.

In Oklahoma City: You have two of the six best players in the league, one of the best two-way big men in basketball (SERGE!), a decent low-post option in Enes Kanter, two young big men (Mitch McGary and Steven Adams) who play basketball like a combat sport, and the American Dream, Dion Waiters. Put it all together, and there’s a good chance this is a title team that just needs to stay healthy for an entire postseason. Waiters aside, you couldn’t ask for a better roster to inherit. 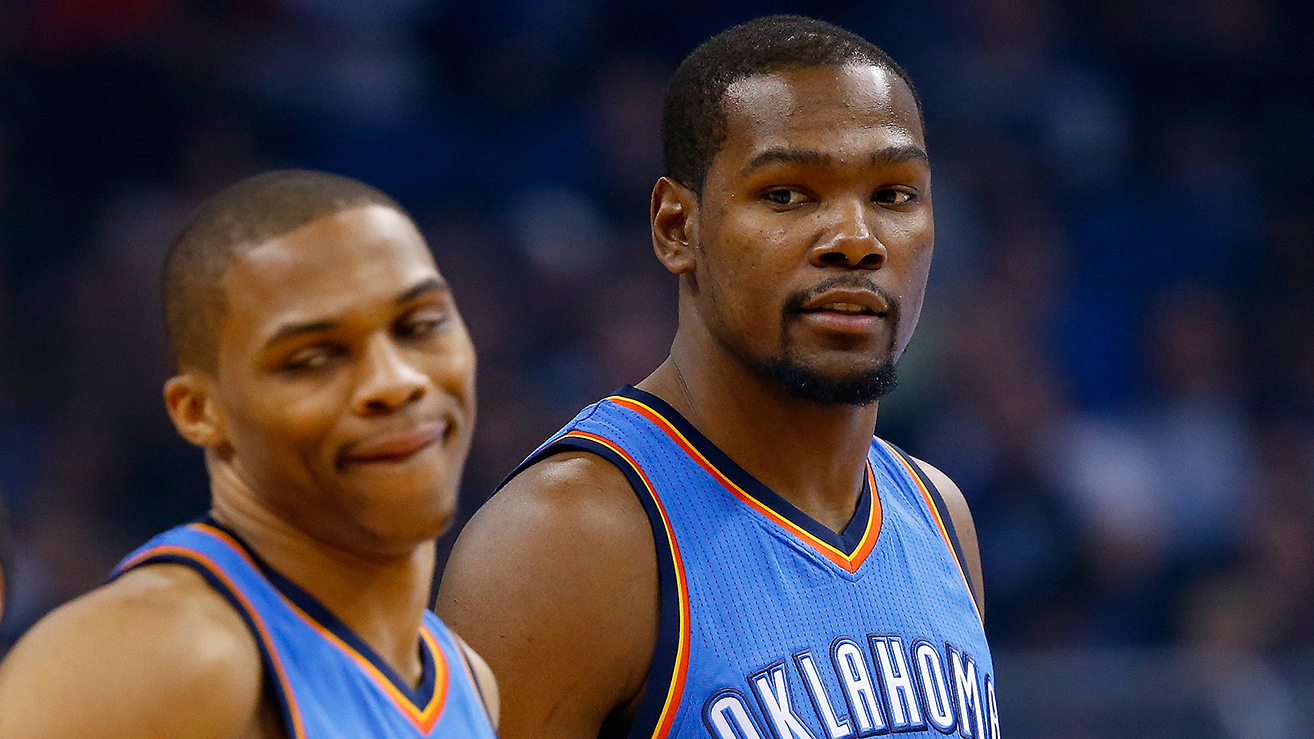 You want to win a title, right? Good.

Because that’s what it may take to keep the OKC foundation in place. It could all disappear in the next 24 months. KD goes on the open market in 2016, then Russ does the following season. Whether they stay or go will depend almost entirely on how well the team does this year. No coach takes a job imagining he’ll do anything but succeed. But there’s not much margin for error with the Thunder. Like, shockingly little room for error.

On the other side, Davis could sign a five-year, $140 million extension this summer or negotiate something shorter to maximize flexibility. However the specifics end up, there will be a lot more security than the Thunder have right now.

Hypothetically, let’s say you just spent almost 20 years coaching college kids in a program that gave you supreme authority over pretty much every aspect of their lives. Can you imagine going from coaching four-year seniors to coaching Westbrook?

And hey, that’s not actually much different than life with Tyreke.

Westbrook is obviously much better overall. He’s a legitimate second superstar next to Durant, and he puts the team in a different tier of contenders. He has to win this category.

But just for the record: Russ exerts such an insane amount of influence on the way the Thunder look on the court. Whatever rewards he brings, he also gives you a much bigger challenge than Tyreke. For example, if you take the ball out of Tyreke’s hands at the end of games, the entire world will nod in agreement. Tell Russ to take it down a notch and pass the ball to KD, and that coach risks (a) alienating Russ, (b) dividing the team, and most importantly (c) taking away the fearless, kamikaze qualities that make Russ a superstar to begin with. It’s a much trickier balance to strike than just telling Tyreke to throw it to Davis.

This one is tough. Sam Presti is the GM who refused to sever ties with Kendrick Perkins and talked himself into choosing between Serge Ibaka and James Harden, making the wrong choice. He almost traded for Brook Lopez, which would have been disastrous, and he did trade for Kanter, who is apocalyptic on defense. They’ll probably re-sign Kanter this summer, and as long as he’s on the court, it will keep the Thunder from ever scaring the crap out of everyone by going small with KD at the 4. Congrats?

Basically, you have to credit Presti for hitting the jackpot in the draft seven years ago. Since then, he’s been sitting at the table with a massive stack of chips, and he’s played a lot of bad hands. This year, he’s all in.

Dell Demps got fleeced by Sam Hinkie in the Holiday trade and tried to build a backcourt around Evans, Holiday, and the ghost of Gordon. He’s made nice moves on the margins — Ryan Anderson is very solid, Omer Asik was probably worth the mid-first-round pick they lost this year, and guys like Dante Cunningham and Quincy Pondexter are perfect role players — but the plan for the future has always been pretty murky. Part of that is likely due to pressure from ownership to win as soon as possible.

Speaking of which, the ownership element only makes this more complicated. OKC’s owners are heavily invested in natural gas, and, uh, Chesapeake Energy is not doing well. If you thought they were cheap before … And in New Orleans, Tom Benson’s mental capacity is being questioned in court, and nobody is even sure who will be running this team in 12 months. Who’s running it now? Benson published an open letter congratulating Williams on a great season, then two weeks later Williams was fired.

Neither situation is so dysfunctional that it ruins the job, but both are complicated enough to make you cautious.

The Thunder will never be cool.

Once a thunder, always a thunder @KendrickPerkins! Love you boy!! Always! 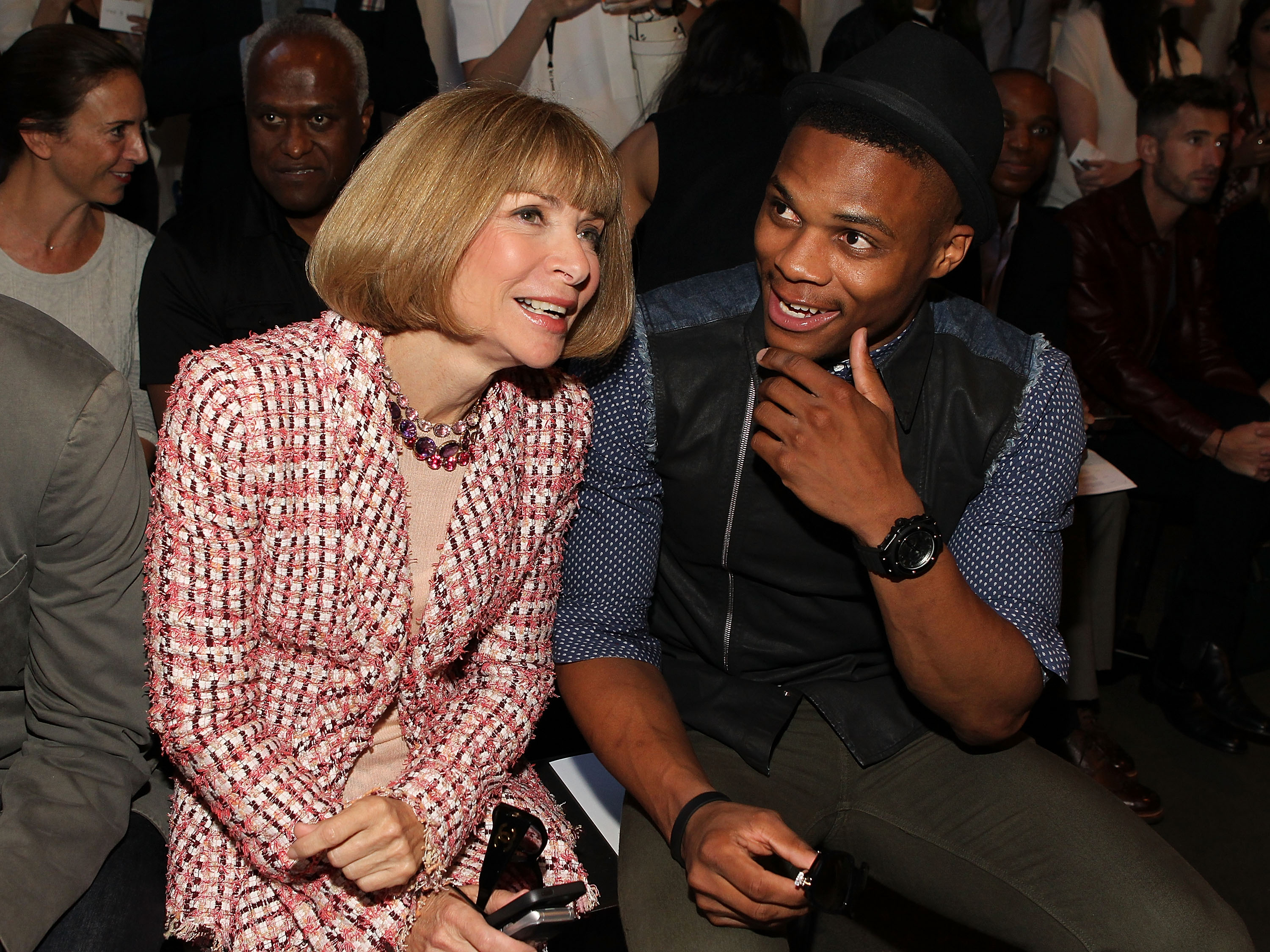 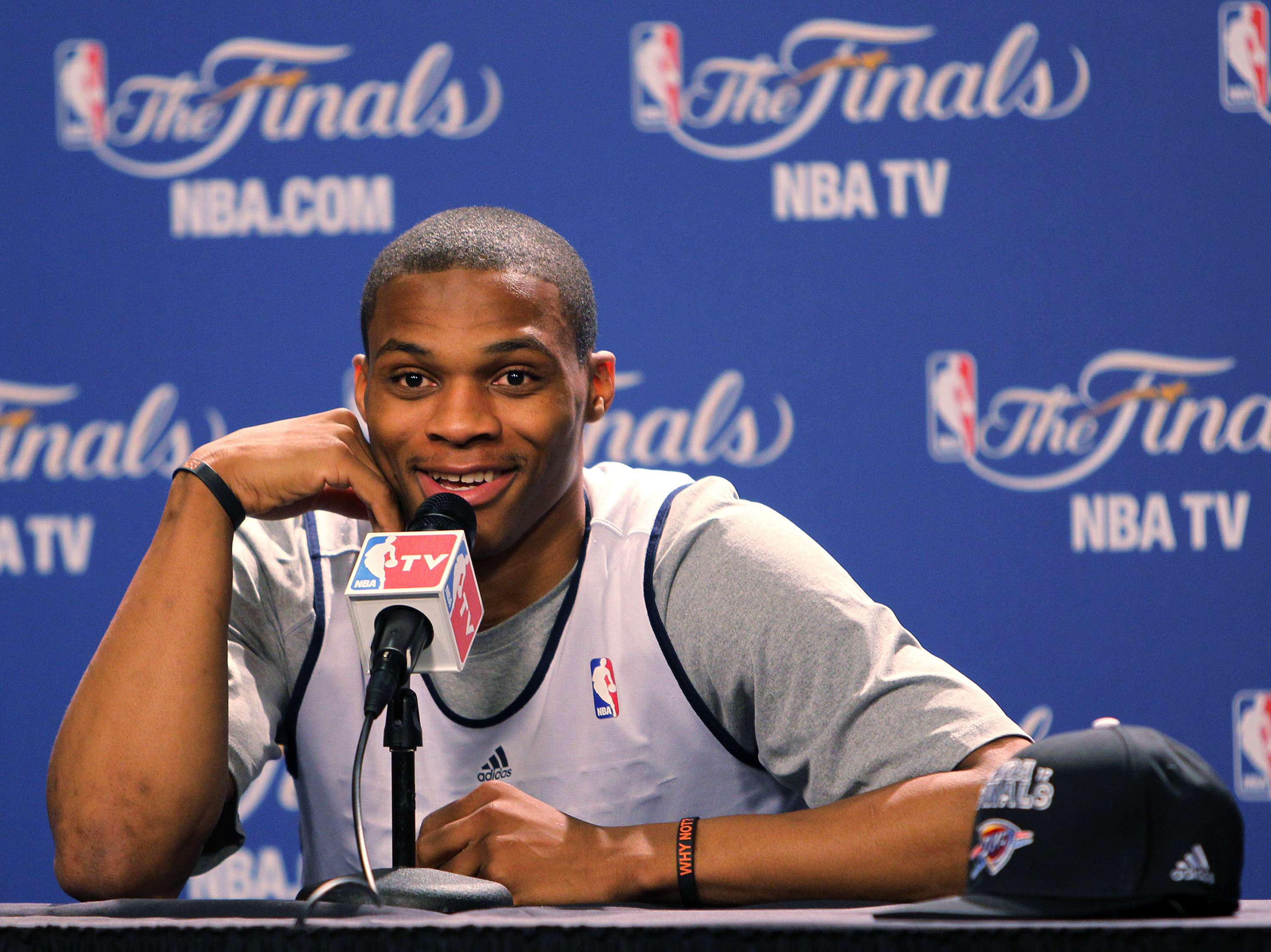 It cannot be overstated how insane the next Thunder season is going to be. Durant’s free agency will be the biggest story in the sport, and the national media is about to go DEFCON: LEBRON on everything that happens to this team from October to May or June. Every loss will be blown out of proportion, body language will be scrutinized, and the players’ relationship with their new coach will be the centerpiece for at least half the speculation. That does not look like very much fun. And then it happens all over again with Westbrook.

In New Orleans? Expectations are a lot more reasonable, and while there’s pressure to succeed following Williams’s controversial firing, I’m not even sure most residents notice the Pelicans during football season. Whatever the scrutiny is, it will be maybe 5 percent as crazy as what happens a few states over.

If it works in OKC, the Thunder win next year’s title and come back the following year with the best nucleus in basketball. It’s possible that the right coach and injury luck can unlock a dynasty. No matter what happens, the Pelicans are a long way from that.

Let’s say KD’s foot injury lingers. Then Westbrook gets hurt. Then KD comes back and the Thunder lose in the Western Conference semis. Then Durant leaves in the offseason. Then Westbrook leaves the next summer. No matter what happens, whoever ends up in New Orleans is coaching Davis this whole time. 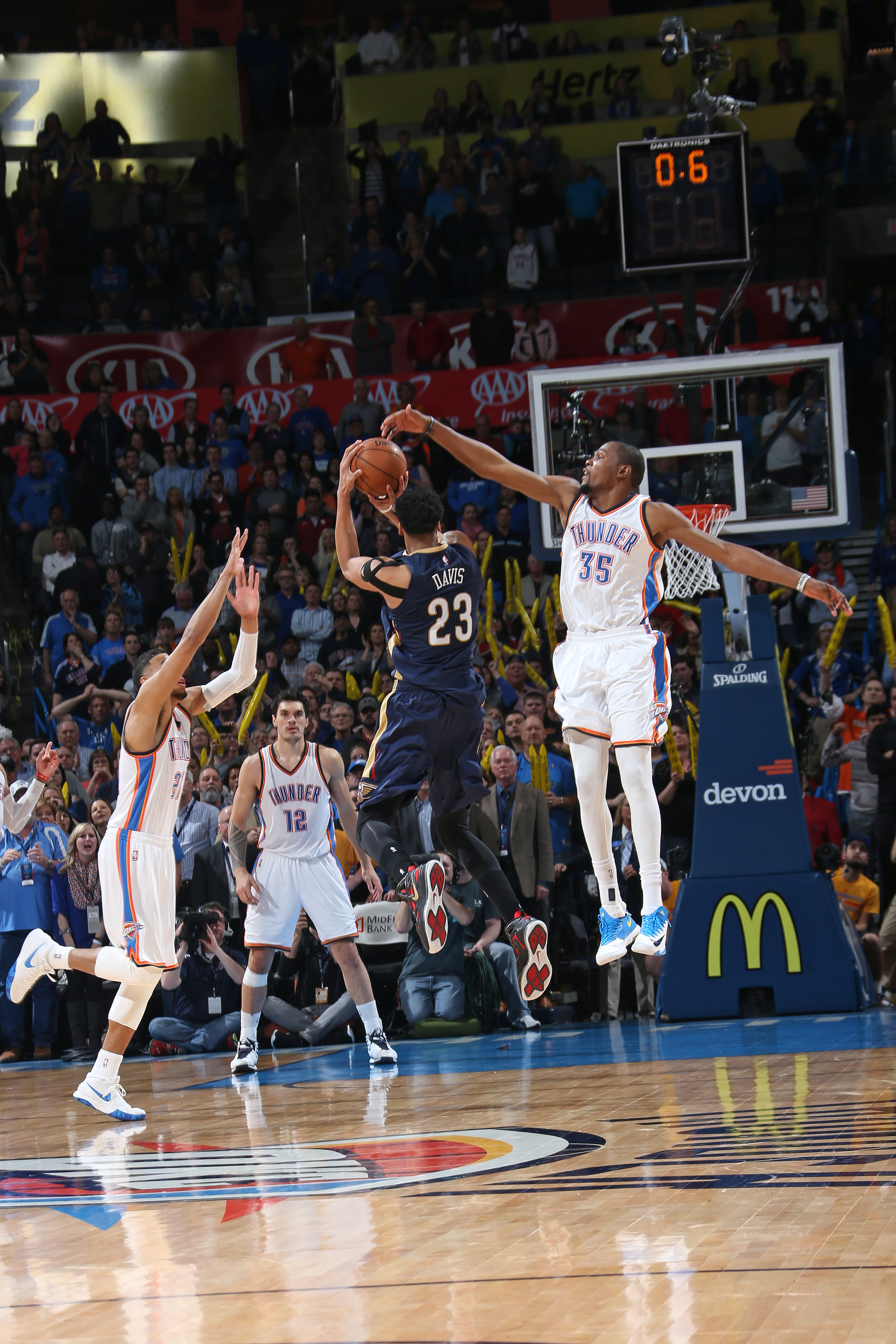 That seems right. Oklahoma City gives Donovan the opportunity of a lifetime (plus Wintour), but it comes with phenomenal amounts of pressure and the chance that everything that makes the job attractive will disappear within the next 14 months. The pressure is one thing, but there’s not enough room for error. Coaching transitions take time that Donovan won’t necessarily have. He signed a five-year deal that will be quickly deemed a success or failure, and he’ll be second-guessed on a weekly basis by rabid national media. It’s almost as much a nightmare as a dream job.

Whoever lands in New Orleans will be much further away, and contending with this team probably isn’t as much of a sure thing as it seems. But instead of insane scrutiny, there’s the security of growing with the best young player in basketball for the next five years. That trade-off outweighs a guaranteed title shot, right?

At best, it’s a tie. Then you have the ultimate tiebreaker: Do you know anyone who’d rather live in Oklahoma City than New Orleans?

That’s where it ends for me. Congrats, Billy Donovan.

But bigger congrats to the coach that’s about to move to New Orleans.