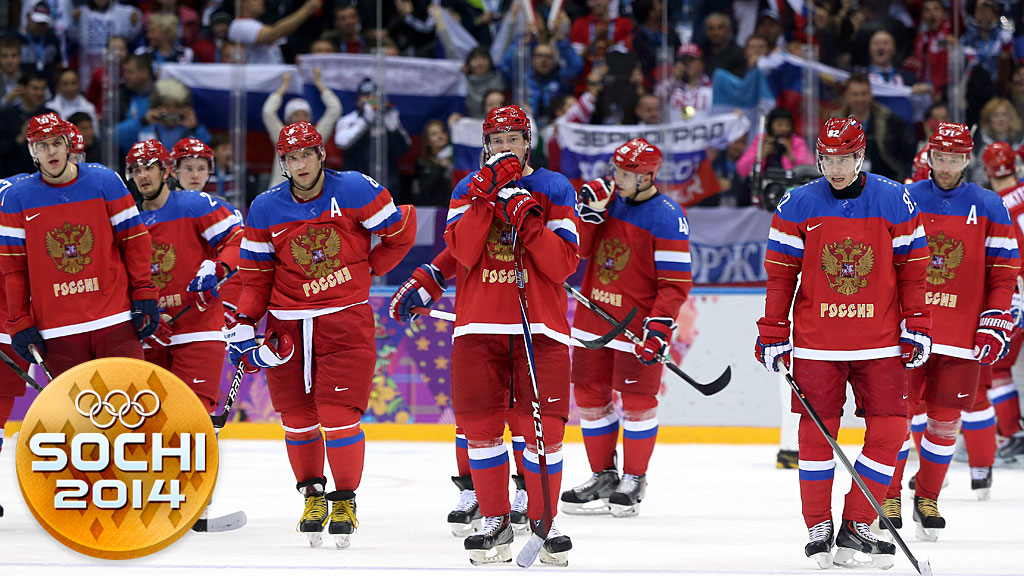 There’s a stereotype of a drunk Russian screaming “Na zdorovie!” before swilling shots of vodka, and it’s not entirely correct. Oh, the vodka part is accurate, don’t get me wrong, but if you try to say “Cheers” with that misguided phrase, you’ll out yourself as a know-nothing foreigner right off the bat. I learned this last night when I tagged along with Brett Forrest, an ESPN contributor who lived in Moscow for years, on a little field trip to the city of Sochi to watch the Russia-Slovenia men’s hockey game.

The main coastal venues for the Sochi Games are actually centered in the town of Adler, about a 40-minute train ride south from Sochi proper. If you ever find yourself taking that commute, try to get a seat on the left side going north and the right when you’re headed south — the whole expanse of your view will be taken up by the Black Sea.

Yesterday — as we rode up to the city sometimes nicknamed the “Russian Riviera,” where Joseph Stalin built his favorite dacha — the water was sparkling and the sky without a cloud. It was about 60 degrees out and felt like the best kind of San Francisco weather; certainly not what you’d imagine for February in Russia. (Up in the mountains, athletes were competing in short sleeves and skis.) On the other side, mishmashes of houses and hotels and a horse or two passed by. When we boarded, the train was already full, a good reminder that not everyone is here for the Olympics.

If you’re wondering where the world’s supply of Rollerblades have disappeared to, the answer is the streets of downtown Sochi. I saw at least a dozen people — most of them children, but definitely some adults — cruising around. It made sense. One of the main drags was a car-free pedestrian plaza lined with palm trees and upscale stores, and even a nearby shopping center was open-air and had an eminently skateable tile floor. A few blocks away, I could see the masts of an old boat on the waterfront. There were signs of the Olympics here and there: sets of rings with which you could take your picture, volunteers in the telltale turquoise jackets, some sort of dance production by a bunch of people who all looked like Santa. But in general, it seemed like any other day, and there was no real sign that Russia was about to compete in its opening Olympic hockey game.

After pleasantly wandering around for a while — Brett’s friend Davlet, whom we were meeting, had given us directions to the wrong street — we got to Draft, a restaurant filled with booths of mostly men and soccer banners. Big mugs of beer were promptly passed around, as was a plate of kielbasa and sauerkraut. More kielbasa was ordered before we’d finished the first batch.

Russia was already leading 2-0 when we arrived; Alex Ovechkin and Evgeni Malkin had scored within the first four minutes. I figured we were in for a rout — Slovenia has only one NHL player, Anze Kopitar, and one KHL guy on its roster — but shortly into the second period, Ziga Jeglic scored for Slovenia to cut the lead in half. The festive atmosphere inside Draft darkened slightly, though Davlet said he was glad it happened: The Russians needed to be toughened up.

Ilya Kovalchuk made it 3-1 with a beautiful snipe off a pass from Malkin that drew raucous celebration inside Draft and undoubtedly broke the hearts of New Jersey Devils fans back in the States. Ovechkin, Malkin, Kovalchuk … we joked that if Pavel Datsyuk were to add one, it would be the ultimate box score for Russian national pride.

Jeglic scored again for Slovenia, though, and at the table next to us, a man looked up at the screen with a mix of agony and disgust, hands on the sides of his head. Brett went and talked to him, so I chatted with Davlet, despite the language barrier. His favorite NHL team, he said, was the Detroit Red Wings, and he asked me several times to check the score of the USA-Slovakia game. I taught him the word “chaser.” When Valeri Nichushkin barreled over the Slovenian goalie to give Russia a 4-2 lead, we celebrated like old pals.

When Brett returned, Davlet proposed a toast. He spoke somberly in Russian for several minutes, telling us how much it meant to him to have American friends there at the table, and expressing his hope that we were having a good time. I was delighted to hear my name somewhere in his monologue; he was saying that in spite of my Russian and his English, he and I had been able to enjoy our conversation.

He touched on the importance of the Olympics to Sochi, and on how much progress the country and the city had made. He said he hoped the world would notice and appreciate all this as they watched. He said much, much more until finally we drank. I was touched. It was certainly more solemn than a misused “Na zdorovie,” and definitely more grammatically correct. It was also heartfelt in a way few toasts in America ever are.

The game ended, and the TVs switched between biathlon and figure skating. The table of men Brett had interviewed earlier invited us over. There was Pavel, a man with tattooed biceps the approximate circumference of his head, and Roman, a cop. Things went downhill fast. The man sitting next to me, Alexander (nicknamed Sasha), was like one of those hovering cater-waiters at a wedding: Every time I took so much as a sip of vodka, he’d completely top off my glass. Suffice it to say, he did this a lot.

There were numerous toasts, none as long as Davlet’s, but each pointed and sincere, and many in honor of Brett and me, their guests. Pavel took off his Army green earflappy tank helmet and placed it triumphantly on Brett’s head. Later, I was wearing it, and my final memory of the evening — before I woke up back in my media dorm room without my dignity and, ruh-roh, my Russian phone that contained all my pictures of Sochi — was of taking a vodka shot chased with a piece of fish as the guys around the table cheered. Like I said, no one says, “Na zdorovie,” but certain other portions of the boisterous stereotype are rooted in beautiful truth.