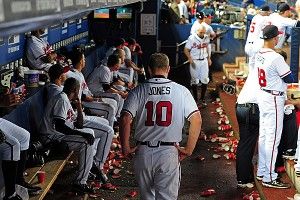 Earlier this afternoon, Larry Wayne “Chipper” Jones Jr. announced that the 2012 MLB season would be his last.

From now until, hopefully, October (come on Braves, Win Just One More for the Chipper), his well-deserved farewell tour will consist of analysts discussing his legacy and his place among the greats. There’s the accolades and statistics, be it the 1995 World Series championship, the 1999 NL MVP award, the record-tying 14 consecutive 20-plus home run seasons to start his career, as well as the seven All-Star games and 450 home runs (both “and counting”). There’s the discussion of “greatest switch-hitter” and whether he is inarguably third behind Mickey Mantle and Eddie Murray, or whether a case could be made for him sneaking into second. And there’s the first-ballot Hall-of-Famer conversation — whether it’s a no-brainer or should he wait a year.

There are also discussions about how to measure Chipper’s success and importance in this current era of baseball. Does he deserve even higher praise for excelling in the Steroid Age, as someone that has never been connected with being a user? (Even though he recently admitted to considering it.) Also, in this age of athletes fleeing their original teams to join superstar squads, how impressive is it that Chipper spent his entire post-high school baseball career — 22 years — with the Atlanta Braves organization? Is that just a good storyline or is that an actual accomplishment?

As important and predictable as these conversations are, as a life-long Braves fan and certainly not a baseball analyst, none of them really exemplify what Chipper Jones represents as a player. For me, Chipper will always represent a throwback to the regular-looking guy who happens to be extremely good at baseball.

When I see Chipper Jones and I hear him talk, I can’t help but smile, because without the jersey, he could easily be a pretty large guy who works in the rifle section at Walmart. He’s this Southern guy who has spent his entire life in only Florida and Georgia, he deer hunts in the offseason, and for Chrissakes had an 18-month moment of weakness with a Hooters waitress. There are millions of country dudes in America who fit that exact description; he just happens to be the one who should go down as his city’s finest baseball player.

This past December, I attended an Atlanta Hawks game with some friends and lucked into some seats moderately close to the floor. After the first quarter of just dismal basketball between the Hawks and the Washington Wizards, I got up to get a drink. When I came back, I noticed there was a sizable crew of children in our row, wreaking havoc across a seven-seat buffer zone. To the left of all these kids, Chipper. We were standing up at the same time and I was floored to see how massive of a guy he was. Sure, I knew it was all muscle, but it wasn’t that freakish-Dwight Howard-LeBron James I-Look-Like-an-Action-Figure build. The only way I can describe it is “grown-man strength.” You know, the kind you get when you cut down six trees in the morning, drag each log back to your home a mile away in the afternoon, and then chop them into smaller pieces of firewood that evening so that your family can stay warm for a week. And then you do the same thing the next week. For 22 years. I’m not claiming this is how Chipper Jones weight trains, but something about him on an elliptical wearing headphones and watching Guiding Light will never be an acceptable image.

Chipper has always represented that athlete who could have thrived playing in any era of the league, even in its earliest, most technologically primitive days. While I’m sure he still takes advantage of all the bells and whistles at his disposal, watching him for almost my entire lifetime, he always seemed like the guy who just woke up, made some breakfast, drove his truck to the stadium, put on his jersey, and went out to play some baseball simply because he loved it and was good at it. It’s a rare, beautiful quality to exude, that lost art of just going to work.

This is a wonderful time for him to make a classy exit. With a young guy on the team in Jason Heyward that shares some of his Casey at the Bat tendencies as well as a similar personality that might keep him on the same team for two decades, it will be fun watching Chipper pass the torch while finally getting the respect he deserves. Celebrating the athlete who simply showed up for work more often than not and did things to make his team competitive happens every blue moon. I’m just glad the next time it happens, it will be for Larry.