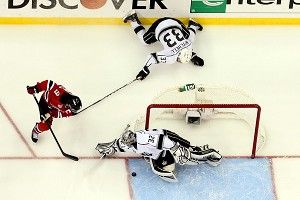 Many moons ago, in a former and more Ann Taylor–filled life, I had a summer internship in the finance world that consisted mostly of the sending of FedExes, the kissing of asses, and the assembling of spreadsheets that would almost immediately become obsolete.

After two weeks of militant training in which I and the rest of the summer analyst class were repeatedly and ominously told to think of our jobs “as a 10-week interview” and instructed to “leverage this opportunity into full-time conversion,” I finally got my very first assignment.

The project was straightforward, if time-consuming: My boss had a meeting the following week with some super-rich dude who he hoped would one day become a client, and it was my job to corral the motley dribs and drabs of bank statements, handwritten Post-it notes, and dusty stock certificates the man had shipped over to us into some sort of workable and comprehensive dossier about just how much he was worth. (And, of course, about how we would best “put his money to work.”)

As a lifelong goody-two-shoes thrilled by the prospect of being able to finally prove myself with an actual task, I decided I wouldn’t leave the office until I’d finished the assignment, which wasn’t expected to be completed for a few days. I labored through spreadsheets. I ordered dinner. I anticipated questions and problems and prepared explanations and defenses. I formatted fonts and pasted photos. I went home at 3, showered, and came back at 5. I finished. I felt immensely industrious.

I sat there, exhausted but proud, as my boss — a whip-smart, slicked-back man whose wife would call in every day that summer to complain about the temperature of the pool at the Hamptons house they were renting — came in, sat down at his desk, saw the thick packet I had so speedily slaved over, and smirked.

“Looks like they didn’t teach you in training,” he said, “how to manage expectations.”

I thought about the dark art of managing expectations Wednesday as the L.A. Kings dropped Game 4 of the Stanley Cup finals at home and missed out on what would have been a Stanley Cup sweep.

“Game 4 has been somewhat of a problem for you guys,” a reporter remarked to Kings coach Darryl Sutter. “You’re 3-3 now when you can close out a series.”

It was true: The only other two Kings losses at that point had come in Game 4s. The first happened after L.A. took a 3-0 series lead against the league-best Vancouver Canucks in the first round, and the second took place against the Phoenix Coyotes in the Western Conference finals. The Kings closed out both series in five games, and added a second-round sweep of the St. Louis Blues for good measure. They won 10 straight games on the road. They looked so good, and looked that way so quickly, that they barely gave anyone time to even jump up on the bandwagon.

Sutter looked like he was about to jump out of his seat at the question. Instead, he scoffed, then he laughed, then he spat out an “Awesome” and pounded the table with both of his hands.

“Close out a series in Game 4,” he muttered with the sarcasm of a thousand teenagers fed up with their out-of-touch parents.

There would be no more questions that night.

On Sunday, the morning after another Kings loss — a 2-1 Game 5 defeat in New Jersey — had turned the series into a series, Sutter spoke unsolicited on the subject.

“I mean, I’m still a little bit confused that there’s some sort of point you’re supposed to win four in a row all the time,” he said. “That’s tough to do. Hard time figuring that out.”

But it was a perfectly reasonable question to have raised, and it appeared even more reasonable in light of Drew Doughty’s surprisingly candid comments about the team’s level of focus going into that Game 4 and the heightened expectations that surrounded the possible sweep.

“I think a lot of us, before Game 4, were distracted with family members and friends coming in and the Cup in the building,” Doughty said Sunday at the team’s practice facility. “Family always comes first, obviously, for everyone, but this time of the year I think the team has to come first. We’re a family, you know, in the room and on the ice. And right now we’re number one in everyone’s minds.”

People have really short memories. The Devils cruised into the playoffs with 102 regular-season points, the same as more frequently favored franchises such as Boston and Detroit. The Kings fired their coach mid-season, couldn’t score goals, and nearly missed out on the postseason. And yet the popular knock on them, going into Game 6 tonight at Staples Center, is that unlike the Devils, they don’t and won’t know how to handle adversity.

“I actually don’t agree with that,” said winger Simon Gagne, who returned to L.A.’s lineup last week after being sidelined with a concussion since late December. “I think we had a lot of [adversity] this year. The coaching’s changed, and battling to get to the playoffs, and an up-and-down season at one point. That took a lot of character to get through that.”

But the regular season fades from memory at this time of year, despite the best efforts of guys like Sutter to remind everyone that the Devils are, in fact, the home team in this situation. In some ways, the Kings have become the victims of their own smashing success, setting the bar for themselves almost impossibly high. They’ve unwittingly over-promised, and now they’re being accused of under-delivering, of twice leaving the Stanley Cup on the table.

Hey, some of us pull all-nighters on PowerPoint, and others trample some of the NHL’s top teams in the playoffs. It’s not fair, and not personal. It’s just business.

“I’m pissed off,” Justin Williams said after Game 5. “A lot of guys in that room are pissed off.”

Had this series taken a different path — had the two teams split the first two home-and-homes, for example, and had the Kings then won Game 5 — the series would still be 3-2, except no one would be asking Los Angeles about whether all of the pressure is on them, or whether they have to do something differently, or whether they can handle the position they’re in. But when you win three in a row, however thisclose the first two of those wins were, it’s a whole different matter.

It’s a mistake to assume that athletes view the world just as fans and the media often do: Through the lenses of history and statistics, or with narrative-heavy intangibles like momentum in mind.

“Whoever wins the last game, people say they have the momentum,” Ilya Kovalchuk pointed out.

At Sunday’s media availability, Devils captain Zach Parise was asked whether he knew just how many NHL teams had been able to battle back from a 3-0 deficit in the playoffs. He knew two: the 2010 Flyers against Boston, and the 1975 Islanders — for whom his father, J.P., played — over Pittsburgh. Shockingly, he hadn’t brushed up on the ancient history of the third team to have made the comeback, and the only one to have done so in the finals — the Toronto Maple Leafs, in 1942.

Neither had playoff standout Adam Henrique. “Did you know there were only three teams to have done it?” he was asked. He said he had not. “When did you find out?” he was pressed.

Here’s what Henrique does know: He’s done it himself, with the Windsor Spitfires of the Ontario Hockey League in the Memorial Cup OHL playoffs in 2010. It might not be the NHL, sure, but it’s the only experience the rookie has to draw from, and it sure means a hell of a lot more to him than some World War II–era team’s comeback ever will.

“You guys look at it from every single angle,” he said — not at all unkindly, just trying to explain. “Break down every single period. We just gotta go out and play. That’s it, really. You know, it’s cliche that we say, ‘One game at a time,’ but that’s how we look at it. Win one, get that first one out of the way. Then two …”

He trailed off, perhaps not even wanting to suggest anything about a possible three.

“We just gotta keep doing that. Focus on one game at a time. You can’t get too far ahead. And just play.”

If there’s one place where these cliches and crutches are more shopworn than in sports, it’s in business. And when it comes to business, there may be no catchphrase more recognizable than the alphabetical mnemonic made famous by Alec Baldwin’s character in Glengarry Glen Ross.

Always. Be. Closing. Either you make the sale, or you don’t. No one really remembers how quickly or with what kind of manic fury you completed the work. At the end of the day (sorry, I’m in that kind of mind-set) all anyone cares about is whether that work that you did ended up winning the game, or gettin’er’done, or sealing the deal. First prize is the Stanley Cup, and second prize is a set of steak knives.

“I’m disappointed. We had two chances to close it out and hoist that Cup and accomplish our dream, and we haven’t quite gotten it,” Williams said. “Like I said, we got two more chances and we’re going home. I don’t care where we do it as long as it gets done.”