New York Yankees catcher Brian McCann has many outs to make and millions to take before he can come close to approaching the pantheon of regrettable Steinbrenner signings. If McCann secretly aspires to assume a place next to the Carl Pavanos and Kei Igawas of the world, however, he’s off to an auspicious start.

Behind the plate, McCann has been his typically stellar self this season, ranking first among major league catchers in runs saved from framing, fourth in blocking, and fourth in caught-stealing percentage. Good glove work was only part of McCann’s free-agent appeal, however. The 30-year-old landed a five-year, $85 million deal in the offseason because the Yankees believed he still belonged on the short list of backstops who combine the defense of a dedicated catch-and-throw guy with the bat of an above-average first baseman. That bat hasn’t been there this year, though: McCann’s .230/.286/.375 slash line is the worst of his career, even uglier than the one he produced in 2012 while playing through a shoulder injury that led to offseason surgery.

Adjusting for offensive context hardly improves the picture. McCann’s .236 True Average — an era-, park-, and league-adjusted all-in-one offensive metric on the batting average scale, where .260 is league average — ranks 22nd among 24 catchers with at least 200 plate appearances. Call it Carlos Gomez’s revenge: The catcher who blocked Gomez’s path to the plate while upholding the unwritten rules last September is now having a hard time scoring himself.

Nothing raises the temperature of the local media’s takes like an expensive free agent who falls flat, and McCann, the Yankees’ fifth-highest-paid player, is as suitable a scapegoat as any for the lucky-to-be-barely-above-.500 Bombers’ mediocre performance. Earlier this week, the New York press approached Braves coach Terry Pendleton in search of a juicy quote about McCann, and walked away with several. Pendleton, Atlanta’s former hitting coach and current first-base coach, pinned the blame on pressure — both the “big contract” kind and the “Big Apple” kind (which, thanks to the Yankees’ fetish for high-priced free agents, often go together).

“Going from Atlanta to New York is a different animal,” Pendleton told reporters before Monday’s Braves-Mets matchup. “Brian McCann is going to put more heat on himself and for him, trying to do more is the worst thing for him.” The next day, McCann predictably disputed Pendleton’s assertion that he hasn’t been (and would never be) comfortable in his new home, saying “I love it here” and adding that relocating from Atlanta to New York “didn’t affect me at all.”

The “can’t handle New York” narrative is an analysis-ender, a hollow stand-in for a more elusive (and more satisfying) explanation. It’s not always an inaccurate assessment — it probably wasn’t for Ed Whitson — but unless the player has copped to being a New York Non-Handler or breaks out in flop sweats when he sees Yankee Stadium, it’s a lazy, convenient crutch that we nonetheless can’t disprove. We can’t eavesdrop on McCann’s mental soundtrack to see whether LCD Soundsystem has replaced the soothing sounds of ZZ Top, and we can’t dig into his DVR to find out whether, deep down, he’s still more of a NeNe fan than a LuAnn man. We’re weighing the opinion of Pendleton, who never played in a major media market but who coached McCann for close to a decade, against the protestations of the primary source, who naturally has every incentive to sound like the city’s biggest booster regardless of how he feels, since an admission that he finds New York unnerving would be blood in the water. Even with a press pass, one can’t do much more than ask McCann how he feels, squint into his eyes, and eventually say, “OK.”

Fortunately, part of Pendleton’s assertion is testable: that an increased tendency to take the ball to right field is both an on-field manifestation of McCann’s mental strain and the likely source of his struggles.

“He became a pull hitter over the last three years or so,” Pendleton said. “When he got to the big leagues, he hit the ball everywhere. That’s what made him so good.” By contrast, Pendleton said, Yankees-model McCann is “going pull. That’s his mindset right now.”

Let’s see if Pendleton’s contention stands up to scrutiny. The chart below displays the “spray angle” of each of McCann’s batted-ball types over the past six-plus seasons. A ball hit directly up the middle has a spray angle of zero degrees; negative numbers signify balls hit to the right side of second base, while positive numbers indicate balls hit toward the left side of the field. The more extreme the angle, the closer to the foul line the ball was fielded.

Like any left-handed hitter, McCann tends to send the majority of his batted balls — particularly his grounders — toward right field. However, contrary to Pendleton’s quote, McCann’s pull tendencies weren’t on the rise in recent years, and they haven’t intensified this season. In fact, the opposite is true: He has directed his grounders and line drives closer to left field, and the angle of his fly balls hasn’t budged relative to 2013.

Another way to look at this is by using the Retrosheet-based hit-location data at Baseball-Reference.com, which separates batted balls into three categories — pulled, up the middle, and opposite field — and goes back to the beginning of McCann’s career. Here are McCann’s seasonal pull percentages plotted against his year-by-year True Averages: 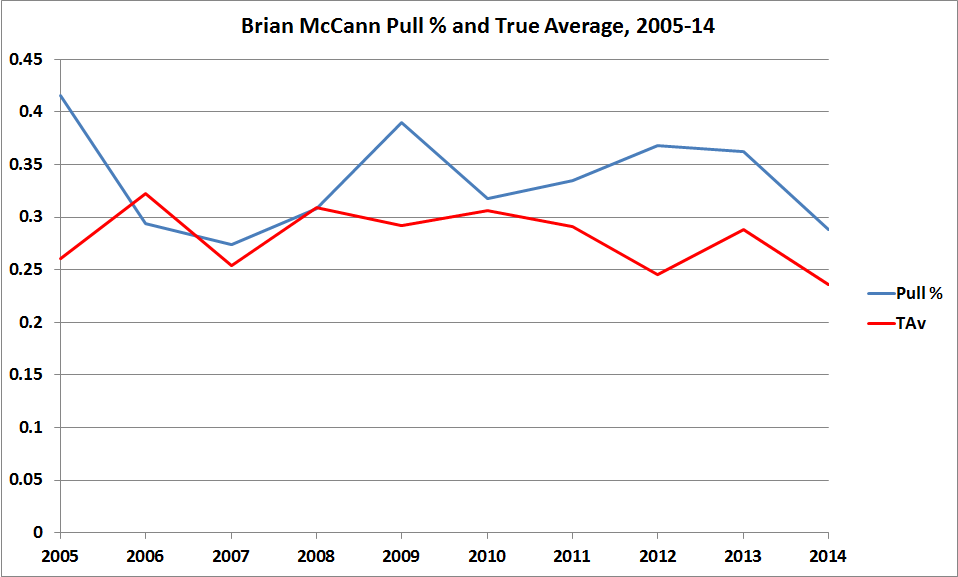 This data also refutes Pendleton’s explanation, because McCann’s current pull percentage is his second-lowest ever. What’s more, the graph doesn’t reveal any clear connection between pull percentage and performance. The lefty’s lowest pull-percentage season, 2007, was also one of his worst.

Even if McCann were fixated on the right-field bleachers, it wouldn’t necessarily be a bad thing. Yankee Stadium is the perfect place to be a left-handed hitter who pulls the ball in the air, which inspired some preseason predictions of a career-high homer output for McCann this year. Thus far, however, McCann hasn’t capitalized. One Yankees executive I spoke to this week said, “I wish he would pull more.”

While we’ve ruled out Pendleton’s pull-percentage hypothesis (no wonder the Braves hired a new hitting coach), we haven’t proposed an alternative. Let’s round up the usual statistical suspects and try to find the problem by process of elimination. After all, even if McCann really were suffering from an acute case of Big Apple–itis, his discomfort would be reflected in some aspect of his approach at the plate.

Maybe McCann hasn’t hit for his usual power because he’s hitting the ball in the air less often? No: Save for an uptick in infield fly balls, his batted-ball breakdown is almost the same as it was last season, and not far from his career rates. Maybe he’s seeing a different distribution of pitches? No: He has faced the same selection of hard, breaking, and off-speed stuff. Maybe he’s being pitched away more often, or farther from the horizontal center of the strike zone? No: According to ESPN’s TruMedia tool, opponents have pitched McCann in virtually the same locations this season as they have over the past five-plus seasons combined.

What about McCann’s plate discipline stats? Might he be swinging at harder-to-hit pitches, creating weaker contact? Unfortunately, that’s another dead end. McCann isn’t chasing more pitches outside the strike zone or swinging more often than he has historically, and he’s not missing more often when he does swing. Up until the point when the ball meets his bat, McCann seems the same now as he did during seasons when he had much more success.

Part of the problem is what happens after the ball leaves McCann’s bat when he’s facing a defensive shift. According to Inside Edge, McCann has recorded a .278 batting average on balls in play without the shift on this season. With the shift in effect, that figure falls to .228. (Last season, the disparity was even more dramatic: .356 versus .183.) According to IE’s best estimates, shifts have gifted McCann six hits and subtracted 16 in 2014 alone. Most ominous of all, McCann has faced the shift in 78 percent of at-bats this season that have ended with a ball in play, more than double his 38 percent rate from 2013. There’s no escaping the spread of individualized defense, which explains why McCann has tailored his swing to go the other way more often and has dropped down the occasional bunt.

While Inside Edge’s shift info explains why fewer of McCann’s batted balls have found holes, it doesn’t tell us why he has hit the ball less hard. McCann’s fly balls have traveled 279 feet on average, down from 293 last season, 285 in his injury-plagued 2012 campaign, and within a foot or two of 300 from 2008 to 2011. His Hard-Hit Average (hard-hit balls divided by balls in play) exhibits a similar downward slope, regardless of batted-ball type or direction.

Batted-ball distance and Hard-Hit Average are imperfect proxies for the speed- and trajectory-tracking data available to teams, but they do pick up some signal. In this case, the signal suggests that McCann’s bat lacks some of the explosive power it possessed in his prime, which shouldn’t come as a shock (particularly in a catcher’s case). “Aging batter declines” is the “dog bites man” of baseball.

Like many a player who has gone through a tough time, and aided and abetted by Yankees hitting coach Kevin Long, McCann has taken to tinkering, going from the upright stance and double toe-tap he used before this season …

… to the crouched stance and single stride he’s adopted this month:

McCann has been “late in getting his hands where he wants,” says Ryan Parker, a hitting instructor and swing analyst for Baseball Prospectus. “Pre-2014 he would tap and get his hands working back at the same time. Now it’s tap (or lift), slight delay, then the hands are rushed back. A new timing pattern with a new stride takes time to learn … it’s not a change I’d advise midseason.” Parker’s observation is supported by McCann’s splits against certain pitch types. Most of the lefty’s struggles can be traced to diminishing returns when he puts hard pitches in play, which could stem from a failure to start his swing on time. He’s still punishing the soft stuff at the same rate he has for the past several seasons.

“That money is hanging over his head,” Pendleton said on Monday. “A lot of guys say, ‘I’ve got to live up to that,’ instead of ‘They signed you to play your game.’” Players are notoriously mercurial about mechanical adjustments, few of which result in Jose Bautista (or maybe J.D. Martinez) types of turnaround. If McCann succeeds with the new stride, he’ll stick with it; if he continues to struggle, he’ll go back to what worked before. McCann might be feeling the effect of turning 30 with almost 10,000 innings of accumulated crouching on his odometer, but even if his execution is lacking, his process still seems sound. Barring an injury, a bounceback likely awaits.

If McCann is pressing in an attempt to justify his salary, it’s hard to see how. While his offense isn’t as valuable as it once was, and the shift hasn’t helped, he hasn’t gone pull-crazy or, aside from a minor mechanical alteration, abandoned the approach that served him so well in the past. Expect him to have a stronger second half — and, when he does, to seem miraculously more comfortable in the Bronx.